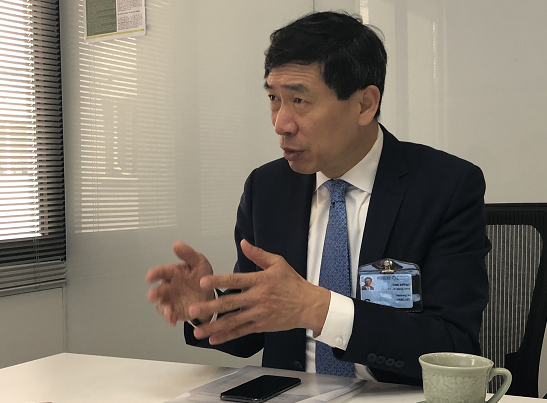 Bangkok (People’s Daily) - The fifth Asia-Pacific Forum on Sustainable Development was held in Bangkok from March 28-30 under the theme "Transformation towards sustainable and resilient societies." It engaged member states, United Nations bodies, other international organizations, major groups and other stakeholders in highlighting regional and sub-regional perspectives on the theme of the high-level political forum in 2018.

“In 2015, President Xi visited New York, he announced a series of plans and strengthened China’s support to international development. China committed 2 billion U.S. dollars for South-South Cooperation Assistance Fund and 1 billion U.S. dollars to the China-UN Peace and Development Trust Fund. We can see that China is willing to share its knowledge and experience in development.”

Hao also touched on the Lancang-Mekong Cooperation (LMC) leaders' meeting in January 2018. China and other participating countries came up with 5 proposals, including water resource cooperation, production capacity cooperation, agricultural human resource and medical and health. “These proposals match the Sustainable Development Goals of the UN,” He said.

He also shared two suggestions for the collaboration between China and other developing countries. The first one is not to do harm to the environment and the second one is to support the interests of the local community and people.

Hao shared his thoughts on the importance of innovation in sustainable development. “UNDP wants to bring innovation in many aspects of development. We believe that innovation will power dramatic changes that can break through the toughest development challenges in the Asia-Pacific region, and transform societies.”

"Such innovations will engage communities in building resilience against risks and promoting sustainability, so that we can end poverty and hunger and achieve our goal of leaving no one behind," he said.

He also touched on the importance of resilience of society. “The starting point of resilience is the identification of capacities that exist at different levels of the social organization in any society: in individuals, at the household level, in communities, within institutions, or at the wider societal level. These capacities are manifested in various forms and are very specific to a given context.” He added that a resilient approach therefore focuses on a society’s or a community’s indigenous capacities for peace, as opposed to its fault-lines for fragility and in doing so, affirms its indigenous assets, capacities and strengths. “If we do not pay attention to this issue, the development plans over decades can be ruined by one disaster. So we should have resilience to prevent such kinds of disasters.”

When asked about the further plans of UNDP, he said that the major work is about the 2030 agenda which was approved by 193 members of the United Nations in 2015 and aims to achieve the sustainable development of all countries. The framework was put forward by the UN, but the government s decide, especially developing countries. The strategic plan of the UNDP is a 4-year cycle from 2018-2022 which concentrates on the quality of governance，technology service, climate change and women’s rights. He hopes China and  the UNDP can have greater collaboration in these affairs.