BRI NEWS BRI: The project that will change our world

BRI: The project that will change our world 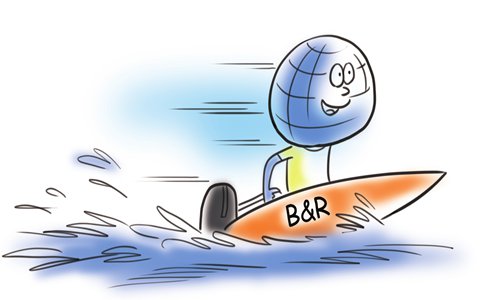 The Belt and Road initiative (BRI) has been a much talked about project in recent years. Its scale is unprecedented. The initiative will not only improve intra-Asia connectivity but also enhance the link between Asia, Europe and Africa. The initiative will impact 65 countries (or more) that are home to nearly 60 percent of the world's population, representing nearly 40 percent of global GDP and vast natural resources. BRI will cost hundreds of billions of dollars in investment over the coming years.

In a world where increasing protectionism is causing countries and regions to drift apart, BRI will bring them closer by improving economic integration through trade and movement of goods and ideas. In the age of hyper internet connectivity, bringing people closer can lead to unprecedented cross-fertilization of ideas, spur innovations and improve cross-cultural understanding of various civilizations, religions and countries. The project, if realized as conceived, could have an even broader impact on our future world.

First, more jobs for future youth: According to the UN, global population is expected to increase to 8.6 billion in 2030 and nearly 85 percent of people will be living in Asia, Africa and Europe - continents to be connected by the BRI. While populations in Asia and Africa grow, the continents will need a steady growth in new jobs that can absorb a growing population of young and educated people. BRI will not only help spur economic growth, but also help support increasing needs for employment among youth. We have seen how youth unemployment contributed to the Arab Spring in 2010 and the aftermath of that continues to afflict the Middle East. BRI will directly and indirectly create millions of new jobs as well as business opportunities across Asia and Africa that will absorb the young workforce in the future and in turn improve socio-political stability across regions.

Second, engine for achieving Sustainable Development Goals (SDGs): Many BRI countries in Asia and Africa have a long way to go to achieve their targets under SDGs, which need trillions of dollars in investments in infrastructure, human development, industry, climate and governance. Much of these investments will need domestic mobilization of resources. Countries with increased economic activities will be able to raise more taxes and hence be in a better position to make necessary investments for SDGs. Countries which are economically interconnected and interdependent will also be able to transfer skills, technology and resources that will support tremendous gains in human and infrastructure development and in turn help achieve the targets of SDGs.

Fourth, enhanced multilateralism: With increased connectivity, trade and economic interdependence, BRI is likely to integrate Asia, Africa and Europe into a mega economic zone never seen before. BRI will likely result in more multilateral institutions and arrangements that will need to address political as well as economic challenges of countries. Six major multilateral financial institutions have already signed a MoU with the Chinese Ministry of Finance for collaboration under BRI. This early involvement of major multilateral financial institutions is important. It will not only help ensure green practices and high standards of transparency in BRI transactions, but also help introduce best practices in preparing, designing and implementing BRI projects, especially in countries with weak capacity. With enhanced multilateralism in the BRI region, imagining an Asian Union or Euro-Asian Union may not be a far-fetched dream.

Fifth, controlled economic migration: As Europe's population shrinks and ages, pressure will build on European economies to import young and skilled labor from Asia and Africa. With better economic cooperation policies among countries, BRI will help improve flow of skilled labor between national borders and ease pressure on developed nations in terms of skilled labor. BRI may open a whole new era of controlled economic migration of people to various countries that is driven be economic interdependence and connectivity.

Besides the economic impact of the multi-billion dollar international initiative, its socio-cultural and political implications deserve attention. As President Xi Jinping of China said in his keynote address at the 2017 APEC summit in Vietnam, economic globalization is an irreversible trend of the time, the world needs to prepare itself with investments in hard and soft infrastructure to share the benefits of the next wave of globalization. BRI will be a catalyst in ensuring that a shared future binds countries and civilizations.