Ever since the outbreak of novel coronavirus pneumonia, members of the Belt and Road News Network (BRNN), as well as foreign media outlets that have participated in BRNN short-term media workshops, have paid close attention to and praised China's decisive and effective measures to curb the spread of the epidemic. They called for opposing all kinds of false statements and voiced their support for China in the battle against the epidemic. 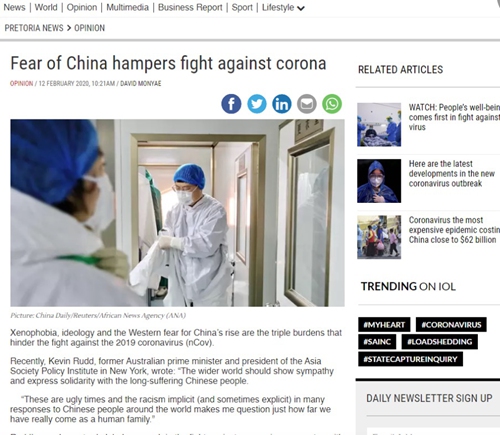 Iqbal Survé, executive chairman of South Africa's Independent Media, offered  high praise to the Chinese people's endeavors under the leadership of ­Chinese President Xi Jinping, in a letter addressed several days ago to Li Baoshan, president of the People's Daily and chair of the BRNN.
"I believe that the Chinese people will eventually overcome the challenges, just as they have faced difficulties before in history," Survé said. He noted that all media outlets under Independent Media are determined to fight back against false news that aims to slander the Chinese government and its people's fight against the virus, and that they are committed to providing South African readers with true and comprehensive information.
Under Independent Media, Pretoria News published an article written by David Monyae, director of Africa-China Studies at the University of Johannesburg. In the article titled "Fear of China hampers fight against corona," Monyae wrote, "There's a need to build a united front in combating the spread of the disease and finding a cure."
Cape Times, also under Independent Media, published an article titled "Cape Town Mediclinic denies coronavirus death claim," which debunked rumors, introduced scientific information about the coronavirus and detailed public health institutions' efforts to curb the epidemic. 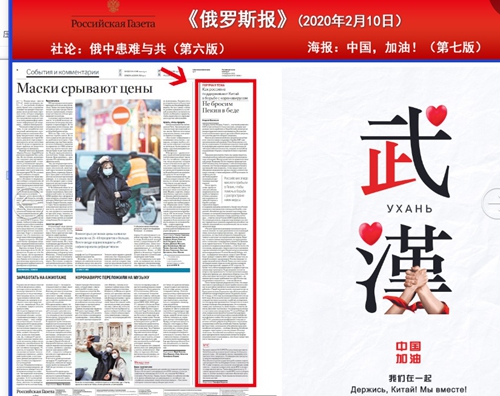 Russia's TASS and Rossiyskaya Gazeta ­reported on epidemic prevention and control progress and China's measures to combat the epidemic in a timely and accurate manner, updating readers with new information every day. TASS cited diplomatic sources that urged caution over false reports about the epidemic in Western media. Rossiyskaya Gazeta published an editorial in support of China and ran a full-page poster reading, "China, Add Oil! We stand with you!" It also said the coronavirus will not change the sustained growth trend of economic and trade cooperation between Russia and China. It is believed that both sides are capable of turning a crisis into an opportunity, and they can open up more new areas of cooperation.
The Emirates News Agency has been reporting extensively on the epidemic, and reposts relevant editorials in other leading newspapers in the United Arab Emirates. Among them, The National newspaper pointed out that China's efforts to contain the new epidemic deserved praise and that people should show sympathy toward the Chinese people and provide help. News agency alkhaleej.ae debunked rumors surrounding the epidemic and informed people of how to scientifically prevent its spread.
Pakistan's Jang Media Group published reports on China's fight against the epidemic in the country's largest Urdu language newspaper, as well as on its TV stations and websites. They also paid close attention to key information on the development of the epidemic in China, as well as Pakistan's assistance to China and feedback from the Chinese media and people.
The Ethiopian News Agency's Editor-in-Chief Dagnachew Melaku recently expressed his support of the Chinese people's fight against the epidemic to the secretariat of the BRNN via email. He said that he believed the co-­construction of the Belt and Road Initiative would lead to a ­better world, and that he and his colleagues would stick to reporting the truth about China for Ethiopian readers. The news agency has published a series of articles in English, Arabic and Amharic, with special reports on the importance of close cooperation between Ethiopia and China in the fight against the epidemic, as well as the fact that Ethiopian flights to and from the Chinese mainland have not been suspended.
Olusegun Adeniyi, chairman of the editorial board of Nigerian newspaper This Day, penned an article acknowledging the measures the Chinese government has taken to curb the spread of the epidemic and expressing his indignation at discriminatory remarks on social media.
On April 23, 2019, the BRNN First Council Meeting kicked off in Beijing. Initiated by the People's Daily, the BRNN thus far counts 205 media outlets from 98 countries as formal members.

Ambassadors' Voices
"Any discriminatory behavior in the operation to curb the epidemic is unacceptable. We are ready to share experiences and cooperate with China in the fight against the epidemic."
French Ambassador to China Laurent Bili
"The Italian government fully recognizes and supports the efforts of the Chinese government in curbing the spread of the epidemic as well as epidemic prevention and treatment plans. "
Italian Ambassador to China Luca Ferrari
"Pakistan is fully confident that China has the conviction, capacity and wherewithal to surmount this challenge with characteristic dignity and firm resolve."
Pakistani Ambassador to China Naghmana Alamgir Hashmi
"Chinese people have shown their strong and historic ability to overcome any difficulty by keeping their unity and sense of stewardship."
Iranian Ambassador to China Mohammad Keshavarzzadeh
"The outbreak will not affect whatsoever existing projects of bilateral cooperation between China and Greece."
Greek Ambassador to China Georgios Iliopoulos