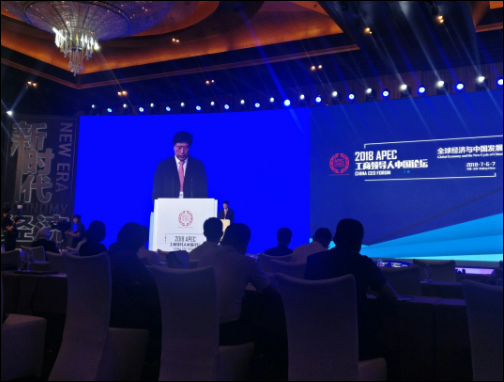 Business leaders at APEC China CEO Forum, which ends on Saturday in Beijing, remain optimistic about the future of globalization despite the trade tensions between Beijing and Washington.

Many said they believed China could continue its high-quality growth and that protectionist policies by US would not succeed.

Yu Jianlong, Secretary General of the China Chamber of International Commerce, said he's speaking on behalf of the commerce sector when vowing full support of the Chinese government's position.

"We are resolutely against trade protectionism, just as we resolutely root for multilateralism. When we look at today's volatile trade landscape, all of the commerce sector shares the same view, that we will continue to push for further globalization," Yu told the forum.

That sentiment was echoed by the attending business leaders.

Carsten Bretfeld, CEO and co-founder of Byton, told CGTN that the company, now based in Nanjing, continues to forecast strong growth in the industry as well as China generally.  "We are all for globalization. There might be implications between different trading parties but the big picture will stay to be pro-globalization," he said.

Daling Family, a company that partly deals in cross-border e-commerce, said it also doesn't expect to be significantly impacted by the trade frictions, as domestic consumption and production remains on track.

“We witness only very minor changes over the years whatever shifts in the economy have taken place. And we've seen constant growth in this sector," said Qi Yan, CEO of Daling Family.

Aside from robust consumption, she also said her industry has seen home-grown brands and products that are just as good and with lower costs. Those products could stand in for high-tariffed imported goods.

Attendees at the two-day forum will also discuss topics such as how the economic landscape will change with the ongoing Belt and Road initiative, China's expanding new-retailing market and She-powered economy.

They agreed that as China has been through great changes over the past five years, its path of high-quality, sustainable development, will not be undermined by outside forces.