Officials, scholars and entrepreneurs gathered at the Hamburg summit on Monday, eying more economic cooperation against the backdrop of rising protectionism. 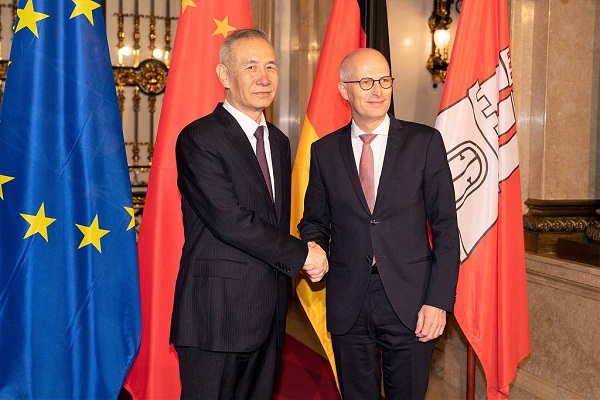 The China-proposed Belt and Road Initiative is well discussed at the two-day “Hamburg Summit: China meets Europe”, which opened on Monday.

In an opening speech, former German Chancellor Gerhard Schroeder said the opportunities created by the Belt and Road Initiative will bring people and businesses in Asia and Europe closer together.

“This initiative has been received with great interest all over the world — including Germany and Europe.

It is a strong signal that China wants closer, faster, better connections with its main trading partners,” Schroeder said.

He also called on closer Sino-Germany cooperation to strengthen multilateralism and fend off new threats.

Schroeder is the Honorary Chairman of the Hamburg Summit, which is initiated by the Hamburg Chamber of Commerce in 2004.

Proposed by China in 2013, the initiative refers to the Silk Road Economic Belt and the 21st Century Maritime Silk Road, aiming at building a trade and infrastructure network connecting Asia with Europe and Africa along the ancient Silk Road trade routes to seek common development and prosperity.

Helis said businessmen in Europe should not enclose themselves, adding the logistics infrastructure — connected by major rail, port and pipeline projects — has already paved the way for good business opportunities.

“There are already several railways linking China’s western cities and Germany’s Hamburg and Duisburg. So why not utilize it?” Helis said.

For Jens Meier, CEO of the Hamburg Port Authority, the Belt and Road initiative means more than just infrastructure building.

Meier said the young generation of the two countries shared experience of the digitalization and some IT solutions that greatly increase the efficiency in managing seaports.

Besides the business value of the initiative, Thomas P. Lamnidis, vice president of Greece’s KLC Law Firm, referred to it as a driving force promoting peace and stability.

Lamnidis said the new Silk Road covers the “hottest areas” of the world, and “it will yield several times of the value people invest” since it not only creates trade flows but generate prosperity, and terrorism and extremism will be averted.

“If you create good life... they don’t want to make attacks, they want to live a good life with their family together,” Lamnidis said.

Cover image: Liu He Deputy Chinese Prime Minister in conversation with Dr Peter Tschentscher with his back to the camera Portrait of Chinese Deputy Prime Minister as Chinese Guest of Honour at the eighth Hamburg Summit