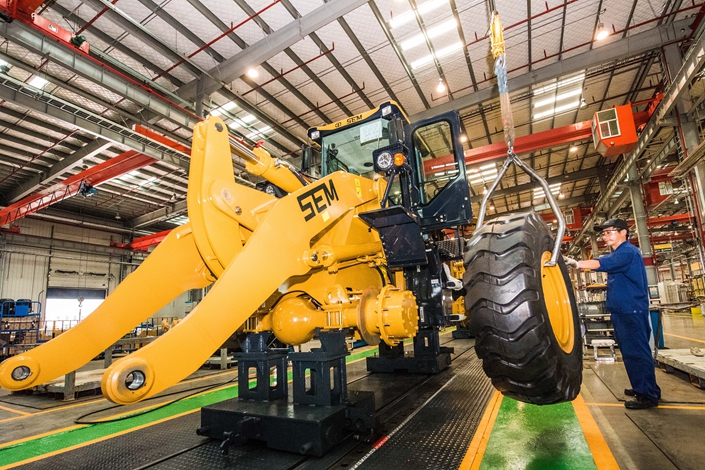 A worker assembles a loader in the assembly workshop of a machinery manufacturing enterprise in Qingzhou city, Shandong province, July 15, 2019. (Photo: VCG)

Resilient domestic growth is helping the world's second-largest economy surf through external headwinds, said economists, who called for more policies to advance stable growth in the face of any continuing downside pressure.

The Caixin/Markit manufacturing purchasing managers index for August was 50.4, up from 49.9 for July, marking the quickest expansion of the sector since March, according to a report released on Monday by media group Caixin and information provider IHS Markit.

A PMI reading above 50 reflects economic expansion, while one below 50 indicates contraction.

Supporting the higher PMI reading was the rapidest expansion of output over five months, which surveyed managers — purchasing executives in over 500 Chinese manufacturing companies — mostly attributed to signs of stronger demand, according to the report.

The survey showed improved domestic demand helped to offset slackened external demand, as total new orders received by Chinese manufacturers was broadly stable during August despite the quickest fall in exports since November.

The employment subindex was at a level only marginally lower than the 50-point mark last month, showing improvement in labor market conditions, the report said.

China's economic growth is expected to stabilize in the second half of the year, given domestic growth resilience and ample room for policy reaction, Cheng said.

Specifically, consumption may pick up as the country has stepped up policy efforts to redress the mismatch between consumption demand and supply, with full-year retail sales growth likely to reach 8.5 percent year-on-year, he said.

Zhong Zhengsheng, director of macroeconomic analysis at CEBM Group, a subsidiary of Caixin, said in the Caixin report there were signs of a short-term economic recovery, though downward pressure may remain a long-term challenge. Overall demand and business confidence didn't improve in August, and industrial prices trended down, Zhong said.

The State Council's Office of Financial Stability and Development Committee, the top body guiding financial regulation, met over the weekend and pledged stronger countercyclical macroeconomic policies. Authorities will step up efforts to smooth out the "transmission of monetary policy" in the economy and better coordinate fiscal policy with monetary and financial policy, meeting participants decided.

Hua Changchun, chief economist at Guotai Junan Securities, said the manufacturing PMI may not rise continuously in the short term as authorities aren't relying on strong stimulus but economic restructuring like promoting high-tech manufacturing and consumption to deal with downside pressure. But the likelihood of a notable drop in PMI readings is limited, as consumption resilience, infrastructure investment recovery and policy support will shield the economy from any major downturn, Hua said.

The official manufacturing PMI inched down from 49.7 in July to 49.5 in August, the fourth consecutive month of contraction, the National Bureau of Statistics said on Saturday.