PHNOM PENH - Cambodian Deputy Prime Minister and Foreign Minister Prak Sokhonn will pay a working visit to Laos on Sept 5-6, during which he will discuss border issue with his Lao counterpart Saleumxay Kommasith, said a foreign ministry's statement on Wednesday. 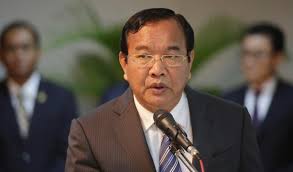 "This visit aims at strengthening and expanding the scope and depth of bilateral cooperation, including border issue as well as cooperation within regional and international fora of shared interest," the statement said.

Border dispute between Cambodia and Laos began in April, 2017 when Cambodia accused Laos of sending about 30 soldiers to occupy the areas of O Alay and O Ta Ngav in Stung Treng province bordering Laos' Attapeu province; however, all Lao soldiers pulled back from the areas three months later after a meeting between the two prime ministers.