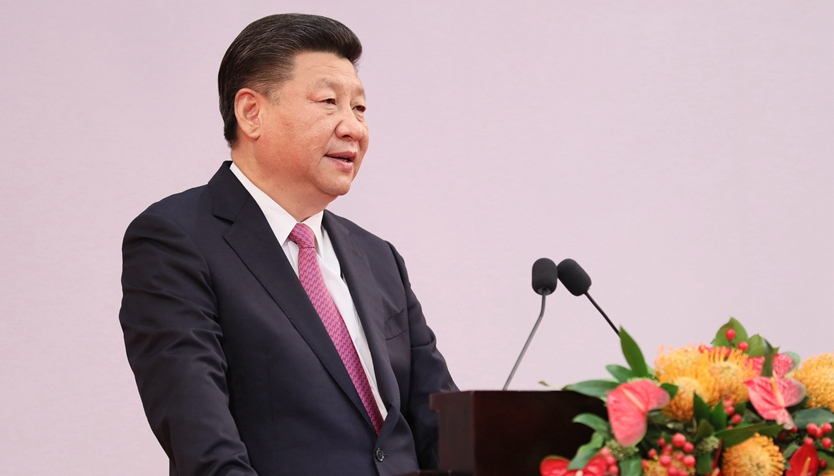 July 1 this year not only marks the 21st anniversary of the return of Hong Kong to China, but also Hong Kong Special Administrative Region's first female chief executive Carrie Lam Cheng Yuet-ngor's first year in office, during which she strived for closer Hong Kong-mainland ties.

In her inauguration speech delivered on July 1 last year, Lam promised to uphold the "One Country, Two Systems" principle and strengthen ties between Hong Kong and the Chinese mainland.

Lam's remarks were echoed by Chinese President Xi Jinping, who delivered a speech in Hong Kong on the same day, at the ceremony marking the 20th anniversary of Hong Kong's return to China.

Xi stressed that "any attempt to endanger national sovereignty and security, challenge the power of the central government and the authority of the Basic Law of the HKSAR or use Hong Kong to carry out infiltration and sabotage activities against the mainland is an act that crosses the red line, and is absolutely impermissible."

Speaking of the prospect of Hong Kong's future development, Xi confirmed that the SAR has been integrated into the "grand journey of the great rejuvenation of the Chinese nation" since its return to the motherland 20 years ago.

The president vowed to continue to support Hong Kong to play significant roles in key projects initiated by the central government.

With the strong support from the central government, projects that are crucial to Hong Kong's closer integration with the mainland have gained solid progress under the administration of Carrie Lam in the past year.

The idea of building a Greater Bay Area was put forward in China's 13th Five-Year Plan (2016-2020) and written into the government work report last year.

The area incorporates the Hong Kong SAR, the Macao SAR and nine cities in south China's Guangdong Province, with a total population of more than 66 million and an annual GDP of over 1.5 trillion US dollars.

Since then, Carrie Lam has been a staunch advocate of the plan.

At the Bo'ao Forum for Asia this April, Lam said the future of the Greater Bay Area will depend on its ability to innovate and connect with the outer world.

She stressed that Hong Kong could make great contributions in these aspects thanks to the "One Country, Two Systems" principle, as it has a free economy and a fine legal system, which could easily provide a business environment at par with international standards, and help facilitate international corporations and support mainland enterprises in their quest to go global.

On May 16, Lam visited two cities in the area— Guangzhou and Huizhou, exploring opportunities to cooperate with the mainland to boost innovation and technology, as well as to tap into the potential of  better using the vast land areas in Huizhou.

She emphasized that each region of the Greater Bay Area has its own advantages, hence the cooperation among them should be complementary.

The Hong Kong section of the XRL

Infrastructure is indispensable for the realization of the Greater Bay Area project.

The Hong Kong Section of the Guangzhou-Shenzhen-Hong Kong Express Rail Link (XRL) is slated for completion in the third quarter of 2018. Once finished, the rail line will connect Hong Kong to the country's national high-speed rail network, allowing passengers to travel directly between Hong Kong and 16 major mainland cities, while significantly reducing the travel time.

In order for passengers to conveniently exit or enter Hong Kong through the XRL, a joint checkpoint arrangement is going to be applied at the West Kowloon Terminus of the rail link.

The practice, more widely referred to as “co-location” of exit-entry control facilities, would enable passengers to undergo inspections for both mainland and Hong Kong in the same location.

While the launch of the Hong Kong section of the XRL was well received in Hong Kong, the joint checkpoint arrangement was not.

To address this concern, the HKSAR government under Carrie Lam's leadership agreed to implement the plan through a "three-step process" with the mainland.

On June 15, Hong Kong's Legislative Council passed the Guangzhou-Shenzhen-Hong Kong Express Rail Link co-location bill after months of deliberation, finishing the last step toward the final goal – commencing operations of the Hong Kong section of XRL in September this year.

Upon the passage of the bill, Lam, who visited the Hong Kong section of the XRL three times as chief executive, said this will help maximize the rail link's transport, economic and social benefits.

Adding to the above-mentioned infrastructure facilities is the 55-kilometer-long Hong Kong-Zhuhai-Macao Bridge, the longest cross-sea bridge in the world.

Construction of the bridge started in 2009 and was mainly completed at the end of 2017.

The bridge is seen as a core infrastructure project in the Guangdong-Hong Kong-Macao Greater Bay Area, with the main function of cutting down driving time between the three cities from the current three hours to a mere 30 minutes.

In April, Lam faced the enquiry of independent lawmaker Claudia Mo, who charged that the bridge of was a "political act". Lam refuted the accusation, arguing that the project is significant to Hong Kong SAR's integration into the national development, economy and livelihood. She said it would have been even better had the bridge been completed five or ten years earlier.

Earlier in March, Lam paid a trip to Zhuhai for the first time since taking office and visited the Hong Kong-Zhuhai-Macao Bridge, praising it as beneficial to people in the region.

At this year's reception to celebrate the 21st anniversary of Hong Kong's return to the motherland, Lam expressed optimism in Hong Kong SAR's tomorrow.

"After a year of leading the government to demonstrate a new style of governance, perform new roles and implement a new fiscal philosophy, I have even greater confidence in Hong Kong," Lam said.

She should be confident, as the past year has witnessed the steady advancement of key infrastructure projects linking Hong Kong and the Chinese mainland, under her efforts.

With a strong connectivity as a good start, Hong Kong, a world-class financial hub, will enjoy a unique geographic position in integrating into the mainland's strategic plans, like the Belt and Road Initiative and the Asian Infrastructure Investment Bank.