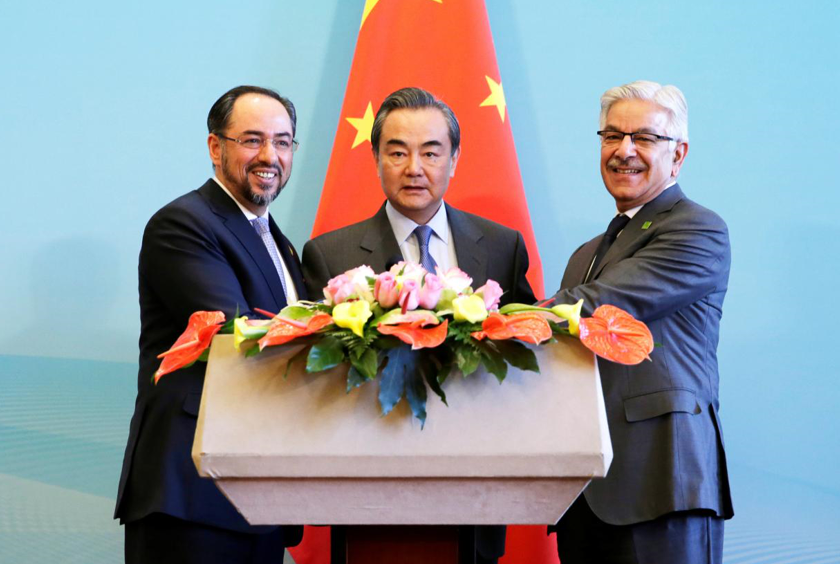 The first round of the China-Afghanistan-Pakistan trilateral Foreign Ministers' dialogue was held in Beijing on Tuesday, which displayed China's efforts in the peace process for Afghanistan and also the promoting of regional peace through sharing its own experience, experts said.At the invitation of China's Foreign Minister Wang Yi, Foreign Minister of Afghanistan Salahuddin Rabbani and Foreign Minister of Pakistan Khawaja Asif headed delegations to attend the dialogue on Tuesday, according to the Chinese Foreign Ministry. This was the first round of the China-Afghanistan-Pakistan trilateral Foreign Ministers' dialogue. The three countries will discuss in-depth three particular topics: mutual political trust and reconciliation, development cooperation and connectivity, and security cooperation and counter-terrorism. "China is playing an active role in pushing forward the peace process in Afghanistan by mediating disputes, especially in the wake of the US' new Afghanistan policy which has aggravated and alarmed Pakistan," said Zhao Gancheng, director of the Center for Asia-Pacific Studies at the Shanghai Institute for International Studies.Zhao said that in its new Afghanistan policy the US demands Pakistan to cut the provision of aid to Islamic militants and rein them in, failing to acknowledge Pakistan as a victim of the war and doing no good for promoting future peace-related  dialogue."China proposed the trilateral dialogue in an effort to launch a communication platform for Afghanistan and Pakistan and push practical cooperation… China would like to play a constructive role in helping enhance mutual trust and understanding between the two countries," Foreign Minister Wang Yi stated upon his meeting with Rabbani on Monday."China has maintained good relations with both Afghanistan and Pakistan and these trilateral dialogues will help ease tensions, especially as previous negotiating mechanisms have failed to work," said Fu Xiaoqiang, an expert on South Asian studies at the China Institutes of Contemporary International Relations.Fu said that the US' decision to introduce India into the previous communication mechanism along with China, the US, Afghanistan and Pakistan only complicated the regional situation."The anti-terrorism situation in Afghanistan became severe as Islamic State (IS) was defeated in the Middle-East, causing a scattering of terrorist groups across the region and in Afghanistan, where home-grown terrorist groups would not only threaten the country but also its neighbors, and thus a joint effort to deal with the situation is imperative," Fu said.Zhao added that China's Northwest regions, especially the Xinjiang Uyghur Autonomous Region would be affected if the anti-terrorism situation were to worsen in the region.Enhancing economic cooperation under the Belt and Road initiative was also high on the Tuesday meeting agenda, with China offering its development experience in an effort to help safeguard regional stability, experts said.Afghanistan can also play an active role in the construction of the China -Pakistan Economic Corridor, Fu said.