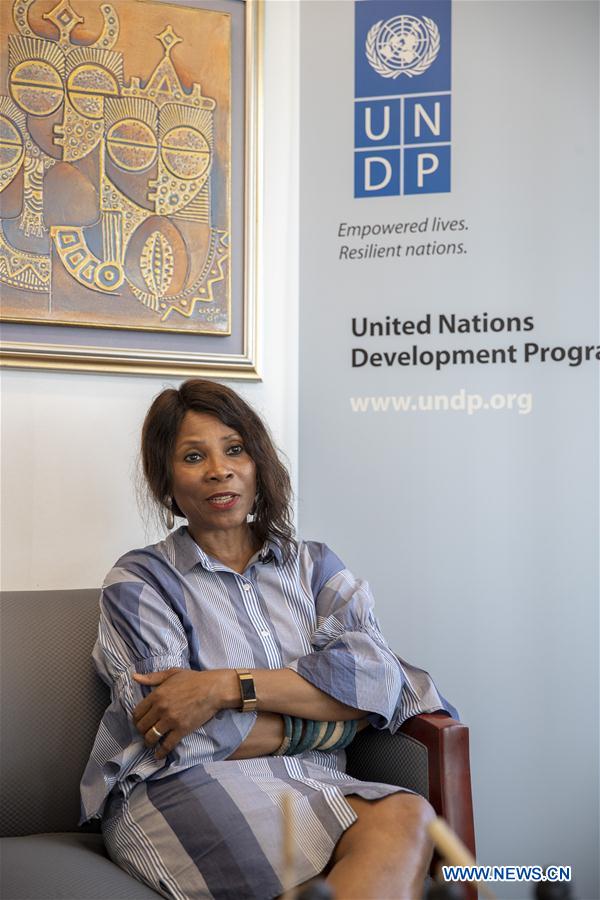 Ahunna Eziakonwa, Assistant Administrator and Director of the Regional Bureau for Africa, United Nations Development Programme (UNDP), speaks during an interview with China's Xinhua News Agency in New York, the United States, Aug. 28, 2018. The Belt and Road Initiative (BRI), if well managed, could significantly reduce costs of doing business for both China and Africa while strengthening ties at the same time, Ahunna Eziakonwa said. (Photo: Xinhua)

The win-win cooperations between African countries and China "will put Africa on a sustainable development pathway," Ahunna Eziakonwa, assistant administrator and director of the Regional Bureau for Africa at the United Nations Development Program, told Xinhua in an interview.

Eziakonwa will join the delegation led by UN Secretary-General Antonio Guterres to attend the Beijing Summit of the Forum on China-Africa Cooperation (FOCAC) on Sept. 3-4.

During the interview, she named the railway connecting landlocked Ethiopia with Djibouti, the Mombasa-Nairobi railway in Kenya, the hydropower plants in Uganda and some other major Chinese-assisted infrastructure projects in Africa, saying China-Africa cooperation has entered the fast lane.

China and Africa have a long history of cooperation, which has greatly intensified in the past decade, especially in the last five years, she said.

It is exciting to see Africa making incredible developments with China, she added.

Africa has received help from many countries, yet its relationship with China has unleashed explosive growth in the region, she said.

China's development experience is relevant to Africa, she said, adding that Chinese investments in Africa, especially those in infrastructure, have ignited hope for the region.

"Having been at a similar development point in history gives a lot of developing and emerging economies hope for transformation, accelerated human development and innovation," Eziakonwa said.

The 2015 FOCAC held in South Africa witnessed an agreement between China and Africa to carry out 10 major cooperation plans. These plans will help the region receive 9 million tons of clean water per day and offer 900,000 jobs, among other benefits.

Africa is rich in mineral, petroleum and human resources, and it could learn from China's plans for economic and social development, she said.

The Belt and Road Initiative aims to deepen connectivity in infrastructure and trade and among peoples across countries and regions, she said.

Under the initiative, Africa can cooperate with China "to leverage ... infrastructural development in such areas as roads, railways, water, telecommunications and energy in order to strengthen regional connectivity and integration," she said.

To make a win-win partnership, she suggested, the initiative should take into consideration the national development priorities of each African country.

This partnership, based on equality, mutual respect and mutual benefit, could help Africa meet the UN 2030 Agenda for Sustainable Development targets, she said.