BRI NEWS China, America can be great together

China, America can be great together 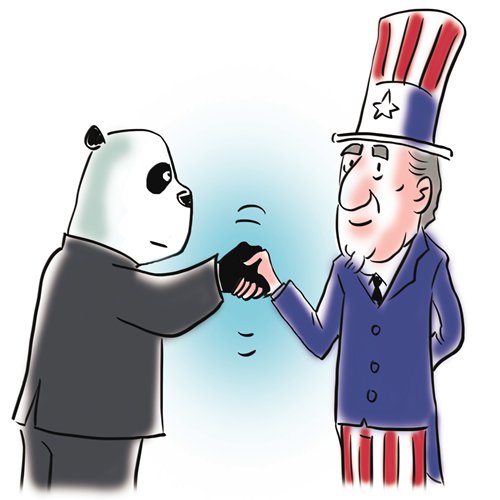 US President Donald Trump will start his official visit to China on November 8, just days after the Communist Party of China (CPC) concluded its 19th National Congress. In his report to the Congress, Xi Jinping announced that his government will build a "great modern socialist country" by the middle of the 21st century while Trump is making efforts to "Make America Great Again." At the moment, the relationship between China and the US needs to be redefined to make the two countries become great together.
Apparently, the whole world is witnessing a different US. With "America First" in his mind, Trump wants to dramatically adjust immigration and tax policies and has showed a tendency of withdrawing from global issues. Over the past few months, the US has withdrawn from the Trans-Pacific Partnership, Paris climate agreement and the UNESCO. Trump even threatened to trash the Iran nuclear deal.
Both Trump's inaugural speech and his address to the UN in September showed a propensity to counter globalization with economic nationalism. His performance was described as "bellicose isolationism" by reviewer Philip Stephens of the Financial Times.
Meanwhile, China is undergoing massive changes as well. The speed of China's economic development has slowed and there are major challenges in building an innovative economy, promoting financial reforms and dealing with an aging population. In politics, "CPC leadership" is being strengthened and the liberalization expected by the West will not happen in China in the foreseeable future. China has pushed forward military reforms to build a world-class army.
China has been more proactive in diplomacy. It has defended its territorial sovereignty and emphasized that it won't compromise its core interests. China has led international development and global governance to build a community of common destiny through initiating the Belt and Road initiative and the Asian Infrastructure Investment Bank. Xi reaffirmed these policies in his report at the opening of the 19th CPC National Congress.
Changes in the development of both countries led to a new transformation of Sino-US relations. In 2012, Xi proposed to build a new model of major-country relations between China and the US, which aims to avoid strategic confrontation between Beijing and Washington. But there are enormous challenges in the way. For instance, the US Chairman of the Joint Chiefs of Staff, Joseph Dunford, bluntly said in September that China will be the biggest threat to the US by 2025.
Managing the relationship of competitive coexistence between China and the US could be becoming more difficult, but bilateral relations have been more stable since Trump took office. Xi and Trump have maintained effective communications. The four high-level dialogue mechanisms established by them in April have functioned well. The leaders hope to avoid a trade war and prevent tensions on the Korean Peninsula from spiraling out of control.
However, for enduring peace the two sides need to expand cooperation. The rich middle-class in China wants to buy American products and services while the US can use Chinese companies to burnish its infrastructure. The two countries also have a prospective future in energy cooperation, including liquefied natural gas, clean coal and nuclear power.
The Belt and Road initiative can boost Sino-US relations and better Asia-Pacific infrastructure will generate more space for trade. Asia will need up to $26 trillion for infrastructure in the next 15 years - a lucrative market for US companies such as Bechtel Corporation, Halliburton and Caterpillar Inc..
General Electric has signed agreements with several Chinese companies to build power stations in Pakistan and Saudi Arabia. It has also signed deals with China's Silk Road Fund on financing in power grid, new energy and oil and gas sector development, which will create more jobs for US workers.
Besides, China and the US can strengthen cooperation on Afghanistan. In August, Trump announced a new strategy for the Afghanistan war. Afghanistan needs to build a sustainable economy to prevent young Afghans from becoming militants. China has given economic aid to Afghanistan and offered to train its population in agriculture, water conservation and healthcare.
Despite Trump's "America First," China and the US have sufficient scope for cooperation and their relationship can't just be defined by the North Korean issue. The future of the two countries is not like a seesaw. Both need to contemplate on sharing power with responsibility.
The author is a senior research fellow with The Charhar Institute and an adjunct fellow at the Chongyang Institute for Financial Studies at Renmin University of China.