BRI NEWS China and Arab states set to shine together

China and Arab states set to shine together 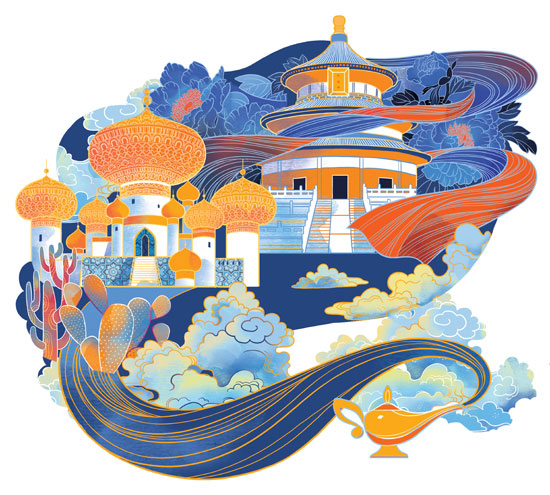 Editor's Note: The eighth Ministerial Meeting of the China-Arab States Cooperation Forum will be held in Beijing on Tuesday. How can China and the Arab states strengthen cooperation? Four experts share their views on the issue with China Daily's Liu Jianna. Excerpts follow:

Sino-Arab relations not only about oil

Li Weijian, a senior fellow at the Center for West Asian and African Studies and Institute for Foreign Policy Studies, Shanghai Institutes for International Studies

It's a misconception that Sino-Arab cooperation is only about oil. As a matter of fact, only a few, such as Saudi Arabia and Kuwait, of the 22 Arab countries and regions export oil to China. The importance of oil in Sino-Arab relations has relatively declined in recent years, because the global energy market has changed from a seller's market to a buyer's market and China has diversified its energy imports.

As a strategic partner of nine Arab states, China's cooperation with the Arab world extends to technology, finance, tourism and the aerospace industry. Looking ahead, the Belt and Road Initiative and various development plans proposed by the Arab states, for instance, Saudi Arabia's Vision 2030 and National Transformation Program 2020, would provide more space for cooperation.

Generally speaking, China and the US have followed two distinct paths in the Arab world. While Beijing has maintained friendly relations with the Arab states and adhered to the policy of non-interference in any country's internal affairs, Washington has always tried to impose on the Arab states its own set of values, even waged wars that have devastated many a Middle East country. In other words, the US' influence in the Arab world is waning and China's is rising because of their respective policies.

Potential to tap in the future

Yang Guang, a senior research fellow at and director-general of Institute of West-Asian and African Studies, Chinese Academy of Social Sciences

The potential for deeper Sino-Arab cooperation in four fields is immense. First, to improve energy security, the two sides should deepen cooperation in the field of energy. Yet Sino-Arab cooperation is focused on trade. To strengthen the bond in energy, the Arab states have to open up their upstream oil and gas operations to China so it can have access to rich oil and gas, and China should open up its downstream oil and gas operations to Arab investment to allow the Arab enterprises to increase their share in the Chinese market.

Second, deeper cooperation in production capacity can help the Arab states to expedite their industrialization. Some Arab states are in dire need of technology, in which China has a lot to offer. For example, China's labor-intensive technology can help the Arab states reduce the rising unemployment rate, and its high-tech support can boost economic development in the Arab world. In fact, the "1+2+3" cooperation mechanism which President Xi Jinping proposed in 2014 will deepen Sino-Arab cooperation in high-tech, including nuclear energy, aviation satellite and new energy.

Huang Minxing, a professor at the Institute of Middle Eastern Studies, Northwest University

Given that China is the largest manufacturing country and Arab states have rich energy reserves, trade between the two sides is bound to increase. China's quality manufactured goods with attractive prices have helped the Arab states to stabilize commodity prices, control inflation and improve local people's livelihoods, while oil and gas from the Arab world have facilitated China's economic development.

Some have forecast a remarkable increase in China's influence in the Arab world as the US retreats from the world stage. Yet, despite its waning influence in the Arab world, the US still enjoys many advantages compared with China. Some Arab countries, including the members of the Gulf Cooperation Council and Jordan, have had special ties with the US for decades, while countries such as Saudi Arabia rely on the US for their national security, and this fact is not likely to change any time soon. So it is impossible for China to replace the US in the Arab world regardless of its obvious lack of motivation to do so.

The Belt and Road Initiative is set to provide an exceptional platform for Sino-Arab cooperation. But three issues require particular attention.

First, security ought to be made the top priority as certain Arab states are embroiled in conflicts, even civil wars, which make investment risky. Over the past eight years, China has had to evacuate its nationals from Libya, Yemen, Egypt and Syria due to security concerns and Chinese investment and projects there have suffered severe losses.

Third, some Arab states' militaries exercise too much control over enterprises, making rent-seeking a threat. This reality must be considered to avoid unnecessary troubles for future investment in the Arab world.