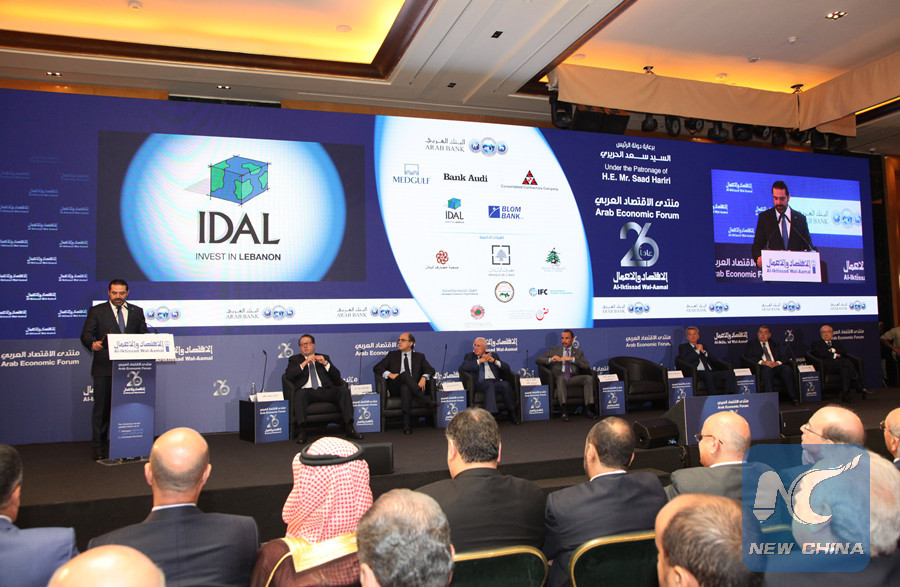 Arab analysts hailed the cooperation between China and the Arab world, and expected more projects and investments under the China-proposed Belt and Road Initiative.

On the sidelines of the 26th Arab Economic Forum held on July 12-13 in Lebanon's capital Beirut, the participating officials and economists spoke highly of the achievement by China and its fruitful and peaceful Belt and Road Initiative that aims for shared benefits for the entire world.

"We are very interested in promoting economic cooperation between China and Arab countries, and there is large room for integration in this regard at the level of financing important investments like in infrastructure," former Lebanese Prime Minister Fouad Siniora told Xinhua.

He believed more opportunities are presented for China-Arab cooperation amid the ongoing chaotic conditions in the Arab world, saying the disorder in the region over the past years "is enough."

"Instead of unilateralism and hegemony, China provides the Arab states and the world cooperation platforms, just like the forum on China-Arab cooperation two days ago, for mutual respect and benefit with no precondition," Siniora said.

"This shows real friendliness and means a lot," the former prime minister added.

The eighth ministerial conference of the China-Arab States Cooperation Forum (CASCF), held on Tuesday in Beijing, capital of China, approved the Beijing Declaration, a Declaration of Action on Sino-Arab Belt and Road Cooperation, and an action plan guiding the development of the CASCF from 2018 to 2020.

Nael Raja Al-Kabariti, chairman of the General Union of Arab Chambers of Commerce, Industry and Agriculture, said the CASCF has proposed profound and serious projects for both sides.

"China's role is vital in implementation of the projects agreed during the forum and under the Belt and Road Initiative," he said, hailing the initiative "a distinctive idea" which "has begun work in the Arab world through real projects that reflect the seriousness of the Chinese government."

He also lauded the "privileged" China-Arab relations, especially in trade, and hoped the relations would go beyond trade and create more exchanges in science and technology.

Proposed by China in 2013, the Belt and Road Initiative refers to the Silk Road Economic Belt and the 21st Century Maritime Silk Road, which aim at building a trade and infrastructure network connecting Asia with Europe and Africa along the ancient trade routes of the Silk Road.

"Many areas are in need of more cooperation between China and the Arab world," said Rauf Abu Zaki, CEO of Al-Iktissad Wal-Aamal Group, which sponsors the Arab Economic Forum, as these fields "are still in their infancy."

"Relations will grow and exchanges will increase in the next phase at a rapid pace in the field of trade and investment," he predicted.

Zaki called for the organization of more specialized China-Arab forums to bring together firms from both sides and help them establish partnerships.

Noting the outcome of the CASCF meeting, he stressed the importance of activating the plans and projects approved at the levels of government and the private sector to overcome challenges in the way of strengthening cooperation.

According to Zaki, the private sector has a great responsibility and potential in boosting economic relations between the Chinese and Arab sides.

"It is true that bilateral communication has advanced a lot, but access from place to place is an essential step in the process of transporting goods, facilitating people-to-people understanding and building relations, including economic and cultural ones," the former Lebanese prime minister explained.