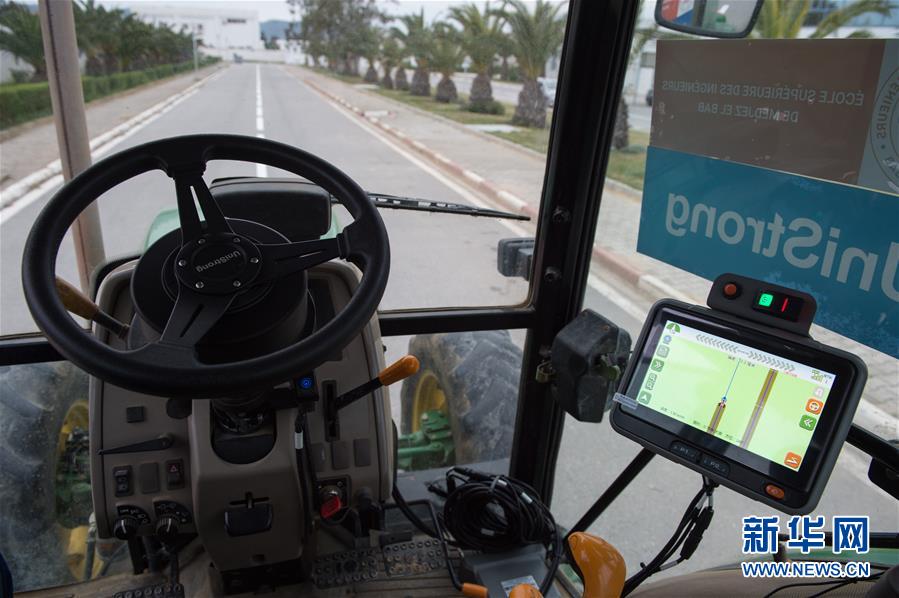 The photo shows a self-driving tractor equipped with the BDS driving on the street. (Photo: Xinhua)

Speaking at the second China-Arab States BDS Cooperation Forum held in the Tunisian capital Tunis, the officials and experts agreed that increased application of the BDS in the region could elevate the China-Arab strategic cooperation to a higher level to benefit both sides.

"The BDS cooperation is the best example for the strategic cooperation between China and Arab states, as satellite navigation integrates many hi-tech areas, including telecommunication and space technologies," Slim Khalbous, Tunisian minister of higher education and scientific research, told the audience at the forum.

"This is an important opportunity for Tunisia, while the BDS cooperation also means the further upgrade of the China-Arab relations," the minister said, noting that Tunisia strongly supports its cooperation with China on the BDS application.

He hailed Tunisia's cooperation with China, suggesting that the two sides conduct more exchanges between universities and enterprises, and implement more projects on the BDS application to boost the bilateral ties.

Mohamed Ben Amor, secretary-general of Arab Information and Communication Technologies Organization (AICTO), said that the establishment of the China-Arab States BDS/GNNS Center in Tunis in 2018 was an important step in deepening the mutually beneficial China-Arab cooperation.

He pledged to boost the China-Arab cooperation on the application of satellite navigation technology, which has been widely used in land surveying, environmental monitoring, precision agriculture, disaster-reduction, and maritime transportation.

"Satellite navigation has provided many conveniences and benefits for us, and we are determined to push forward with our cooperation," Amor said in his speech at the opening ceremony.

Kamal Hassen Ali, assistant secretary general of the Arab League (AL) in charge of economic affairs, lauded China, which made important contribution to building the ancient Silk Road, for establishing an excellent mechanism for cooperation and exchanges with Arab states.

Under the theme of "Cooperation, Application and Service," this year's forum focused on increasing BDS application in the Middle East region.

"The size of our cooperation will grow bigger, as the China-Tunisia cooperation has borne many fruits, and it will achieve greater progress in other countries in the region too," Ali said.

He noted that the BDS has been already applied in many Middle Eastern countries, including Tunisia, Algeria, Kuwait and Sudan in areas such as precision agriculture, telecommunication, maritime monitoring and disaster relief.

Li Chengwen, the Chinese ambassador for China-Arab States Cooperation Forum Affairs, said that a "Space Silk Road" is taking shape as the BDS becomes a new engine for pushing forward the fruitful China-Arab cooperation, especially in the hi-tech area.

At the forum which was attended by more than 200 officials, experts and business people from China and Tunisia, several agreements were inked on furthering cooperation on the BDS application.

Many of the attendees also watched the demonstration of the application of BDS for precision agriculture at the China-Arab States BDS/GNSS Center, during which a self-driving tractor equipped with the BDS smartly averted obstacles and drove along the planned routes through the remote control.

The center, the first overseas BDS center, was set up in Tunis in 2018 by China and the AICTO to showcase the BDS technology and promote international exchanges and cooperation on the field.

The BDS, which went into trial operation in 2011 and started global service in later 2018, is a navigation satellite system independently developed by China.

It is compatible with other similar positioning systems, including the American GPS, Russian GLONASS and European Galileo systems, but it also boasts its unique advantages such as providing messaging service, which can be especially useful in making emergency calls at time of disaster or loss of direction in remote places.