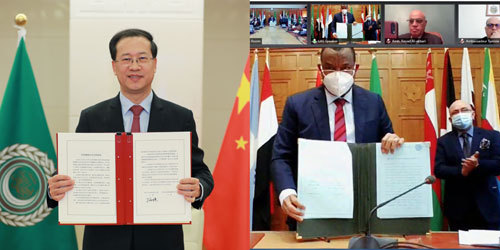 China and the League of Arab States have upgraded their collaboration against rising cyberspace risks and challenges by signing and releasing their landmark proposal, Initiative on China-Arab Data Security Cooperation.

The document, meant to keep data and production chains afloat in the digital economy era, was inked at a videoconference on Monday held by Vice-Foreign Minister Ma Zhaoxu and Assistant Secretary-General of the League of Arab States Hossam Zaki.

Officials said the latest data security policy brainchild builds on the two sides' increasing collaboration in cutting-edge technologies such as 5G and artificial intelligence and teamwork regarding internet security responses in recent years.

Data security collaboration is highlighted at a time the oil-rich region's internet infrastructure has fallen victim to rampant cyberattacks in recent years.

Meanwhile, Chinese firms' growing involvement in the region's digital economy is contributing to its recovery amid the COVID-19 pandemic.

In 2018, China, Egypt, Saudi Arabia and the United Arab Emirates became founding members of "The Belt and Road" Digital Economy International Cooperation Initiative, which focuses on promoting the digital economy.

Also, in September, China issued its Global Initiative on Data Security as a Chinese solution to major issues concerning data and cybersecurity.

The China-Arab initiative signed on Monday "injects global digital governance with the wisdom and strength of developing countries", and Arab countries became the first part of the world to produce the joint release of a data security initiative with China, Foreign Ministry spokeswoman Hua Chunying said on Tuesday.

Unanimous support for this initiative among Arab states "adequately illustrates that this initiative echoes the times' trends and lives up to the common aspiration of international community", she said.

Ma Zhaoxu, the vice-foreign minister, said the initiative's signing and joint release on Monday "marks a new level" of China-Arab digital cooperation as well as "a new phase" in the digital sectors' strategic mutual trust and pragmatic cooperation.

This proposal serves as "a shared, key contribution of China and Arab states to global digital governance", as it advocates for balancing security and development, upholding equity and justice, Ma said.

In recent years, governments of Arab countries have rolled out consecutive visions and measures to create a secure digital environment, incorporating data security as a pillar of their national security strategies.

At the conference on Monday, the Arab League underlined the need for various countries to develop uniform international rules, jointly respond to cybersecurity threats, maintain the security of data and supply chains and create favorable circumstances for smooth operation of societies and economies.

The China-Arab initiative is in line with the consensus reached at the United Nations in the field of internet security, reflects the common call of the international community to maintain network and data security and helps to fix loopholes in international rules, the Arab League added.

The initiative drew expansive support from Arab states before and during State Councilor and Foreign Minister Wang Yi's six-nation Middle East trip from March 24 to Tuesday.

Wang said the initiative's signing "sent out a unanimous voice on the issue of digital economy governance".

At a meeting on Monday with his Omani counterpart, Sayyid Badr Hamad al-Busaidi, Wang called for joint efforts from the two nations to translate the data security initiative into reality and help "boost the say of developing countries" in formulating the rules governing the global digital economy.

The Omani foreign minister said Oman has opened all its sectors to China and welcomes Chinese investment in industries including tourism, energy, science and technology and information technology.

Omani Minister of the Royal Office Sultan bin Mohammed al-Nuamani told Wang in a separate meeting that his country is ready to bolster collaboration with China in areas including information technology.

Similarly, Jordanian Deputy Prime Minister and Minister of Foreign Affairs Ayman Safadi told Wang in a phone call on March 13 that Jordan stands ready to strengthen cooperation with China in areas such as data security and counterterrorism.

Chinese e-commerce portals are accessible to around 80 percent of internet users in all the six Gulf region countries, People's Daily said on Tuesday.