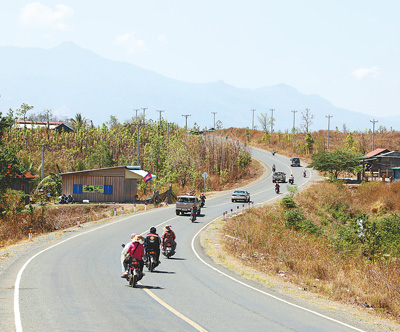 China has helped Cambodia build more than 3,000 km of highways and several grand bridges, and supported it in terms of medical care, irrigation, education and human resources, according to Cambodian Prime Minister Samdech Hun Sen.

Connecting three provinces in the west of Cambodia, the two highways will facilitate the trade and transportation of the local agricultural products, injecting impetus into the economy in the west, said Sun Chanthol, Cambodian Minister for Public Works and Transport.

The third ring road project under construction near Phnom Penh, the capital city of Cambodia, is being built based on a contract between the local government and the Shanghai Construction Group (SCG). Once complete, the project will lay down a highway route that is 48 km in length.

About one year has passed since the project started and Chinese and Cambodian constructors have already completed 33.4 percent of the work.

The project team is equipping the machinery with hand sanitizer, requiring the workers to wear masks and also locally publicizing knowledge pertaining to prevention as well as control of the novel coronavirus all to ensure both the smooth construction as well as the security of the employees amid the epidemic.

Although the industrial parks in the southwest suburb of Phnom Penh pose great pressure on logistics and transportation, the project will connect roads around the periphery of the city while also relieving regional traffic and driving economic growth, said the Cambodian head of the construction team.

While assisting Cambodia with transportation infrastructure, China also provides training for at least 30 Cambodian officials in public works and transport each year so that they could better outline the road network in Cambodia, according to Sun Chanthol.