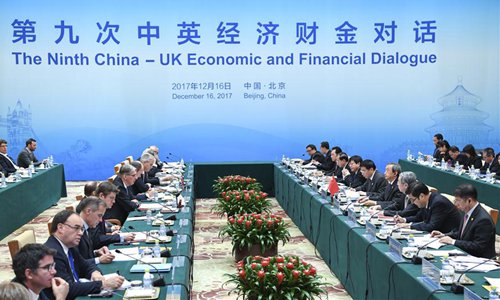 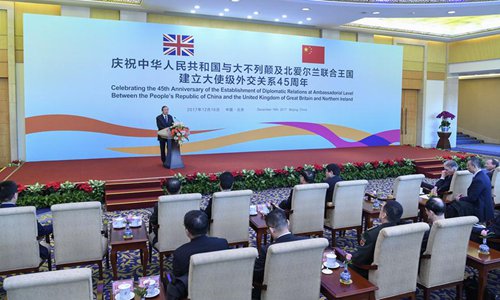 Chinese Vice Premier Ma Kai addresses the reception celebrating the 45th anniversary of the establishment of diplomatic relations at ambassadorial level between China and the UK in Beijing, Dec. 16, 2017. Photo:Xinhua

China is ready to work with Britain to provide new impetus to the development of "Golden Era" of Sino-British relations, said Vice Premier Ma Kai on Saturday.

Ma made the remarks when co-chairing the ninth China-UK Economic and Financial Dialogue (EFD) with British Chancellor of the Exchequer Philip Hammond in Beijing.Seventy-two policy outcomes were reached after the two sides held fruitful discussions on macro-economy, trade and investment, industrial strategies, financial reforms and development, as well as cooperation within the framework of the Belt and Road construction.This year marks the 45th anniversary of the establishment of diplomatic relations between China and Britain, which ushers in new opportunities for deepening China-Britain pragmatic cooperation, said Ma.This dialogue is the first China-UK EFD held after the 19th National Congress of the Communist Party of China (CPC), which shoulders the important task of fulfilling the consensus reached by both leaders and expanding economic and financial cooperation between the two countries, he said.Ma suggested both sides seize the strategic opportunity and continuously deepen cooperation in areas such as energy, infrastructure, trade and investment.He expressed the hope that the two countries could expand industrial and innovative cooperation, promote the alignment of "Made in China 2025" strategy and UK's industrial strategy, and strengthen cooperation within the framework of Belt and Road construction.The vice premier also called on both sides to steadily push forward cooperation in financial service and RMB internalization, beef up coordination in international affairs and jointly promote the recovery of world economy.Hammond said the 19th CPC National Congress has set a grand plan for the future development of China.He said Britain supports the Belt and Road Initiative and hopes to work with China to deepen all-round pragmatic cooperation, so as to boost the development of "Golden Era" of Britain-China relations.After the dialogue, Ma and Hammond met with the press together.