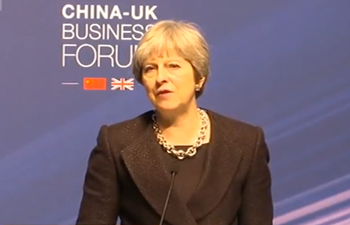 Chinese President Xi Jinping and British Prime Minister Theresa May agreed on Thursday to further promote the "Golden Era" of bilateral ties between the two sides.

In a telephone conversation, Xi pointed out that during May's visit to China earlier this year, a significant consensus was reached to further boost the "Golden Era" for China-Britain ties.

The two sides agreed on pushing the bilateral relations to a more strategic, practical, globalized and inclusive level, and making joint efforts to constantly lead the relationship between the two countries to move forward.

Xi said that China is willing to work with Britain to strengthen communication and coordination on macro policy, maintain high-level exchanges and institutional communication, promote practical cooperation under the framework of the Belt and Road Initiative, and provide more opportunities to upgrade and accelerate the "Golden Era" of bilateral ties.

Xi further expressed the hope that the British side would fill more positive energy into the development of China-Britain relations.

He noted that as permanent members of the United Nations Security Council, the two countries should continue to deepen international cooperation and make greater contributions to building a new type of international relations featuring mutual respect, fairness, justice and win-win cooperation.

The British prime minister said she was delighted that the two sides reconfirmed to further deepen the "Golden Era" of bilateral ties, and welcomed the forthcoming London-Shanghai stock connect program, which would allow investors on one bourse to invest in the other.

May also hailed the pledges made by Xi to further open up China's economy in a keynote speech at the Boao Forum for Asia Annual Conference 2018 held in China's southern island province of Hainan.

She added that the British side is willing to join hands with China to maintain intensive high-level exchanges and expand cooperation in various fields, continue to explore the Belt and Road construction, and actively promote the "Golden Era" of bilateral ties between the two countries.

The two leaders also exchanged views on the situation in Syria and global trade, with Xi emphasizing that China has been greatly concerned over Syria's situation, and has always disapproved of the use of force in international relations.

Instead, Beijing insists that the sovereign independence and territorial integrity should be respected and actions should be taken on the basis of the accepted rules of the international community, Xi added.

He told May that the alleged chemical attack in Syria needs a comprehensive, just and objective investigation, whose results should withstand the test of history, so as to solve the Syrian crisis through political means as soon as possible.

Xi further noted that both China and Britain are the beneficiaries and supporters of economic globalization, and expressed China's willingness to make concerted efforts with Britain as well as all parties concerned to continue to support free trade and build an open world economy.

May said the British side also supports free trade and an open economy, and would like to maintain communication with China on relevant international and regional issues.