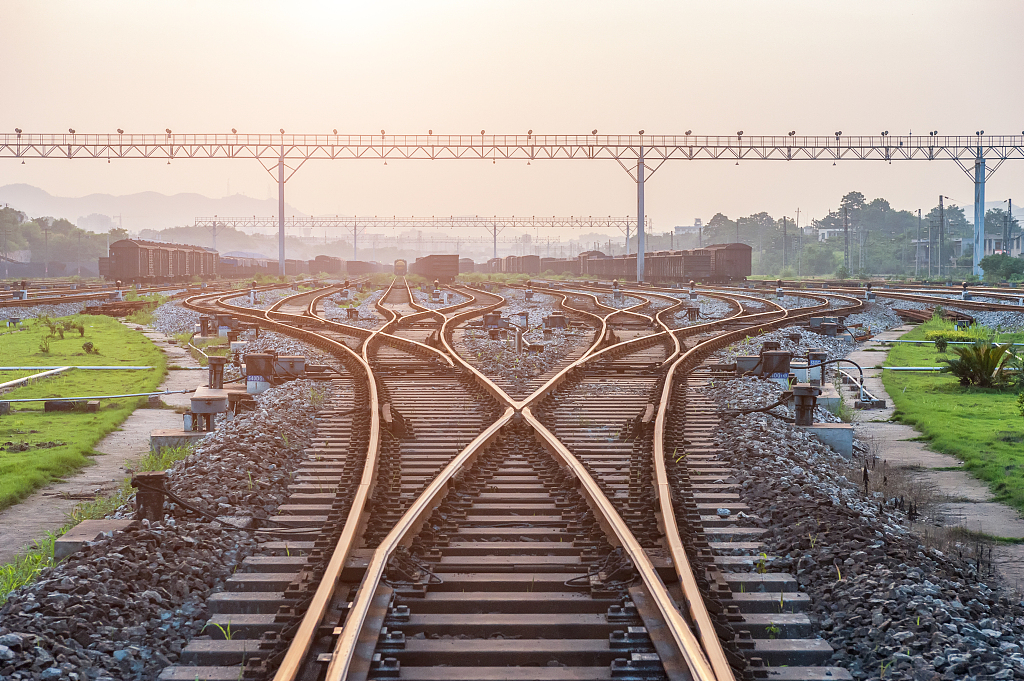 NAIROBI, Sept. 11 (Xinhua) -- Anthony Kimeu developed grit and resilience at a tender age having grown up in the semi-arid plains of Kenya's south eastern county of Makueni that are defined by climatic shocks, hunger and poverty.

The 33-year old father of two was among the few numbers of youth in his native village who managed to pursue education up to tertiary level thanks to financial and moral support from local benefactors.

Kimeu, who is currently an electrician, is grateful to the Chinese contractor of Standard Gauge Railway (SGR) phase 2A, for giving him a job that has enabled him to earn decent wages and hone skills in a coveted craft.

"It has been an exciting experience since I joined the SGR phase 2A in March last year and I am grateful to the contractor for providing me a platform to earn a living while learning new dynamics in power transmission," said Kimeu.

He was in jubilant mood on Tuesday morning as balmy weather enveloped Suswa station which is the destination stop of the 120 kilometers SGR phase 2A that links Kenya's capital Nairobi to the resort town of Naivasha.

The modern railway line, which is part of the proposed Nairobi-Malaba SGR project, is expected to stimulate trade and investments in the Kenyan hinterlands upon its launch this year.

Kimeu is among hundreds of Kenyan youth who have been hired by China Communications Constructions (CCC) that has been implementing the extended railway project since October 2016.

The father of two was in 2014 recruited by the Chinese contractor of the 480 kilometers initial phase of SGR linking Nairobi to the port city of Mombasa, where he honed his skills in wiring.

"So far the experience, money and skills that I have acquired courtesy of working as a technician in the SGR project has been transformative," Kimeu told Xinhua at the Nairobi-Naivasha SGR's Suswa station.

"My family members are proud of this achievement and have nudged me to train and mentor the next generation of artisans in my ancestral rural village," he added.

The construction of SGR phase 2A project that has entered the final phase has been a boon to local youth thanks to gainful employment and skills transfer.

Kishao Ishmael Tuta, a 28-year-old business and ICT major who is a human resources practitioner at CCC, said that more than 500 local youth have secured well-paying jobs since implementation of the modern railway project commenced.

"The localization of second phase of the SGR project has greatly benefitted unemployed youth in the Maasai pastoralist community," said Tuta.

Besides earning reasonable wages, these youth are now able to invest back in their ancestral villages and help uplift the living standards of households," he added.

Tuta joined CCC in 2016 and has witnessed transformation of the vast semi-arid hinterland where the modern railway line snakes through before reaching its destination stop in Suswa where an industrial park will be established.

"Economic gains have been immense since the construction of SGR phase 2A commenced. The business in otherwise small towns has been booming," said Tuta.

He said that localization of Kenya's modern railway project that is an essential component of Belt and Road Initiative, has boosted government's efforts to bridge skills gap and create jobs for the burgeoning youthful population.

Francis Ondari, a 34-year old father of three belongs to the growing ranks of Kenyan youth who are grateful to the contractor of SGR phase 2A for giving them an opportunity to earn a living and polish their skills.

Ondari joined Nairobi-Mombasa SGR project in 2015 to work as a mason and has been retained at its second phase where he is relishing the opportunity to expand revenue streams.

"The SGR project has enabled me to educate my children and learn emerging trends in masonry. My colleagues are also happy to work for SGR," said Ondari.

He said that working at different sections of SGR phase 2A project has been a rewarding experience that he hopes will impact positively on his future career pursuits.

Boniface Kyalo, a 29-year old electrician at Suswa station of SGR phase 2A, said that working for the project since March last year has been a game changer in his professional and personal life.

"This job has enabled me to start a thriving business besides providing basic needs for my children," said Kyalo, a father of one.