China and Cameroon have vowed to deepen pragmatic cooperation under the framework of the Belt and Road Initiative (BRI) and implement the proposals agreed at last year's Forum on China-Africa Cooperation (FOCAC). 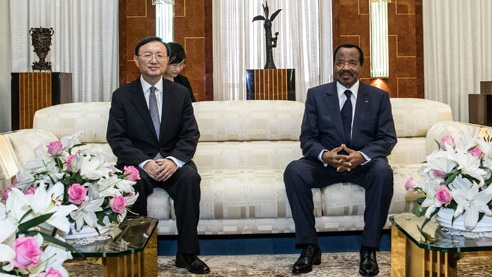 Yang Jiechi, Chinese President Xi Jinping's special representative, made the remarks on Friday during a meeting with Cameroon's President Paul Biya in Yaounde. Yang is also a member of the Political Bureau of the Central Committee of the Communist Party of China (CPC) and director of the Office of the Foreign Affairs Commission of the CPC Central Committee.

He said the two nations should jointly boost cooperation under the BRI and enhance friendly exchanges at all levels. China is willing to continue to support economic development and to improve people's livelihoods in Cameroon, he continued.

Biya said that Cameroon attaches great importance to its friendship with China and appreciates its partner's long-term support and assistance.

He stressed that Cameroon is determined to jointly implement the fruitful outcome of FOCAC, and strengthen communication and cooperation with China in multilateral affairs.