China committed to advancing smart technology cooperation with the world 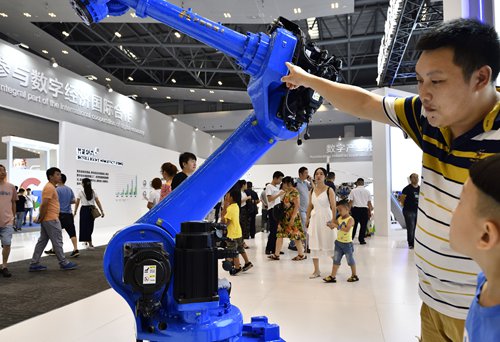 International cooperation in smart technologies will continue as no country can do it alone despite the rising trend of trade protectionism around the world, said attendees at the ongoing 2019 Smart China Expo (SCE).
Chinese President Xi Jinping said in his congratulation letter to the event that China is willing to work with the international community to create the age of intelligence and share intelligent achievements. The 2019 SCE kicked off in Southwest China's Chongqing Municipality on Monday.
The message by the Chinese President was welcomed by foreign attendees.
Erran Persley, commissioner with the Kentucky Cabinet for Economic Development, said that China and the US definitely have to collaborate at some point to better serve not only both countries but also customers around the world.
There are certain issues between the two countries that need to be addressed first, including the idea of forced technology transfer and intellectual property rights, said Persley.
"At the sub-national level, it is our hope that all these things work out over time at the national level. While we wait for those issues to be ironed out, the state of Kentucky will continue to work with cities such as Chongqing to move forward the prospects of cooperation," Persley told the Global Times on Tuesday.
Persley pointed to smart agriculture as an area with huge potential for bilateral cooperation as smart technologies could boost the state's agricultural exports to China more efficiently and effectively.
Danial Shaikh, a deputy director with the British Consulate-General in Guangzhou, South China's Guangdong Province, told the Global Times on Tuesday that cooperation between China and the UK in smart technologies continues to grow.
"The UK has more companies attending the SCE in 2019 than in 2018. We have more business deals and more business outcomes. Over half a dozen memoranda of understanding signings took place this time," Shaikh said.
Shaikh said that infrastructure and education technologies stand out as highlights for the year, although smart technologies cooperation can be found across a wide array of sectors.
Sixty-six projects with a total investment of 211.6 billion yuan ($30.92 billion) were signed at this year's SCE. Among foreign countries, the UK, Germany and Singapore led international cooperation. In 2018, the total contract volume was 107.6 billion yuan.
Executives attending the SCE that said no one country can do all the things in the coming smart age.
Pony Ma Huateng, chairman of Chinese internet giant Tencent, said at the SCE on Monday that no country has all the resources, technologies and capabilities required by the new global technology revolution.
Besides the trend for international cooperation, smart technologies have seen deeper penetration in Chinese society.
For instance, Tencent is pushing its Xiaochengxu (Little Program), which allows WeChat users to find a variety of services and be connected to miscellaneous public services provided by local governments. The drive announced in June has connected 46 state departments and 32 regional governments in China, giving users a universal gateway to access government public services.