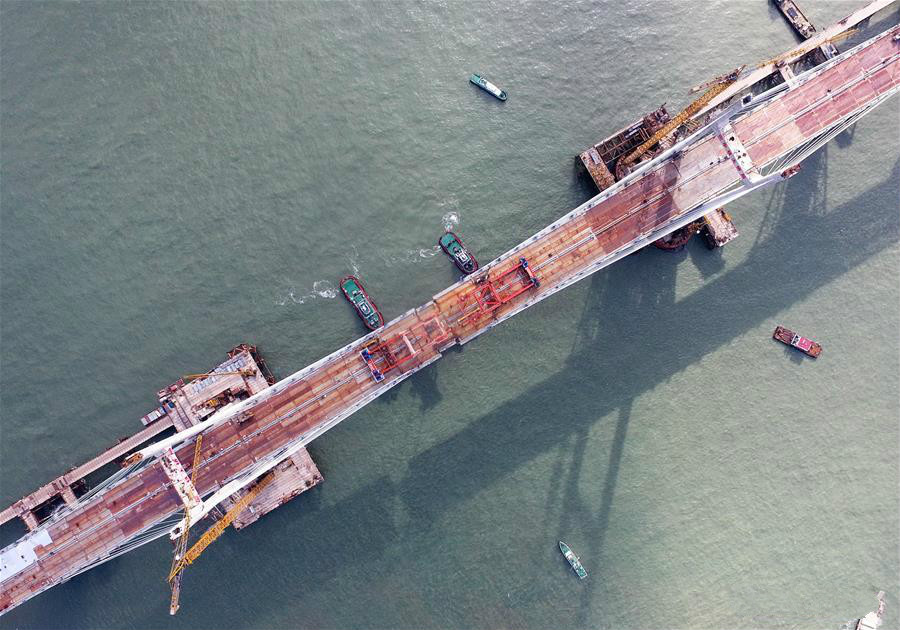 Aerial photo taken on Sept. 21, 2019 shows a steel girder being lifted by a crane at the construction site of the Pingtan Strait Road-rail Bridge in southeast China's Fujian Province. China on Wednesday completed the main structure of the world's longest cross-sea road-rail bridge in Fujian. The last steel girder, weighing 473 tonnes, was bolted on the Pingtan Strait Road-rail Bridge, another mega project in China, on Wednesday morning. With a staggering span of 16.34 km, the bridge connects Pingtan Island and four nearby islets to the mainland of Fujian Province.

FUZHOU, Sept. 25 (Xinhua) -- China on Wednesday completed the main structure of the world's longest cross-sea road-rail bridge in its southeastern province of Fujian.

The last steel truss girder, weighing 473 tonnes, was bolted on the Pingtan Strait Road-rail Bridge, another mega project in China, on Wednesday morning.

Hundreds of bridge builders clad in orange overalls, as well as government officials, hailed the completion on the bridge deck, with several rounds of fireworks being set off to celebrate the moment.

With a staggering span of 16.34 km, the bridge connects Pingtan Island and four nearby islets to the mainland of Fujian Province.

The bridge, which is expected to open to traffic next year, can help shorten travel time from two hours to half an hour between Fuzhou, capital city of Fujian Province and Pingtan, a pilot zone set up to facilitate trade and cultural exchanges across the Taiwan Strait.

"Of all the bridges being built across the world, this is no doubt the most challenging," said Wang Donghui, chief engineer of the project, adding that it is China's first and the world's longest cross-sea road-rail bridge.

The project has attracted worldwide attention from the start of construction in 2013 as it spans an area off the coast of southeast China long seen as a "no-go zone" for bridge-building.

The region has strong gales and high waves for most of the year and is known as one of the world's three most perilous seas along with Bermuda and the Cape of Good Hope.

Workers had to battle the notoriously strong winds, choppy waters and rugged seabed in the region to drill 1,895 piles into the ocean.

The road-rail bridge has a six-lane highway on the top and a high-speed railway at the bottom, which is designed to support bullet trains traveling as fast as 200 km per hour. It is a part of the 88-km Fuzhou-Pingtan railway.

In the past, Pingtan was a backwater island of humble fisheries. It did not even have a bridge connecting it to the mainland until 2010 when the Strait Bridge began operating for cars only.

In 2010, China established the Pingtan Comprehensive Pilot Zone to facilitate cross-Strait exchange and cooperation, ramping up its efforts to improve the island's infrastructure.

Today, skyscrapers are popping up all along the shoreline, with the glow of construction work filling the night sky. Meanwhile, thousands of Taiwan residents swarm into the booming island to live and start businesses.

The island has accommodated more than 1,000 shops and companies set up by Taiwan residents, according to government statistics.

Chen Chien-hsiang, a 29-year-old man who moved from Taiwan to Pingtan two years ago, believes that the new bridge will help attract more businesses to the island and further boost its economic development.

"The new bridge means more than a mere mega project," Chen said. "It also promises a brighter future for people from Taiwan who chose to live and work here."

Huang Zhiwei, 22, found himself making history by lifting the last piece of the bridge girder from a ship about 80 meters below the bridge deck, an undertaking that he had never expected when he joined the project a year ago as an intern.

His parents, unhappy about their son's career choice, felt relieved after several video chats during which their son showed them his working and living conditions at the construction site.

"With so many advanced technologies and safety measures, I am convinced that we will accomplish the mission, and I am very proud of my contribution," said the young operator.

More than 1.24 million tonnes of steel have been used for the bridge, enough to build 190 Eiffel Towers, and 2.97 million cubic meters of cement, nine times the amount of cement used to build the Burj Khalifa towers in Dubai, the world's tallest skyscraper.

"We could not possibly have realized the construction 15 years ago for lack of advanced construction technologies and equipment such as the drilling machine and ship cranes we have developed today," said Xiao Shibo, an engineer of the China Railway Major Bridge Engineering Group Co., Ltd. The bridge has made history in many aspects, Xiao added.

China is dubbed as an "infrastructure maniac" for countless dazzling megaprojects, with the Chinese builders breaking their own world records.

From 2015 to 2020, China's transportation investment is expected to exceed 15 trillion yuan (2.1 trillion U.S. dollars), with a substantial portion reserved for bridge construction.