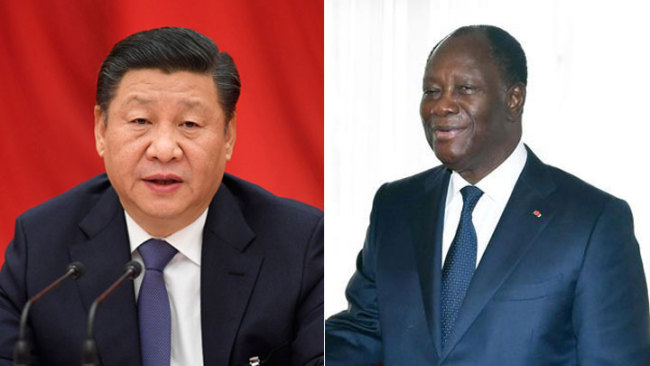 Ouattara, on a state visit to China, is to attend the upcoming 2018 Beijing Summit of the Forum on China-Africa Cooperation (FOCAC).

Xi welcomed Ouattara to the FOCAC summit and said it will contribute to the building of an even stronger community with a shared future of China and Africa, push forward the development of their comprehensive strategic cooperative partnership, as well as unity and cooperation among developing countries.

Since the establishment of their diplomatic relations 35 years ago, China and Cote d'Ivoire have witnessed increasingly wider cooperation with fruitful results, Xi said, stressing that China appreciates Cote d'Ivoire's abidance of the one-China principle, supports Cote d'Ivoire in safeguarding its sovereignty, security and development rights, and in choosing a development path in line with its national conditions.

The Chinese president called on both sides to firmly support each other on issues concerning their core interests and major concerns.

Xi urged both countries to combat security challenges, play a constructive role in promoting peace and security in Western Africa and the whole African continent, and strengthen coordination in the United Nations (UN) Security Council so as to safeguard rights and benefits of developing countries.

For Ouattara's part, he called China a great friend of Cote d'Ivoire, saying the people of his country value their traditional friendship with the Chinese people.

Ouattara expressed his admiration of China's reform and opening-up achievements as well as his solid support for the Belt and Road Initiative proposed by Xi, adding that Cote d'Ivoire will press ahead with the West African Economic and Monetary Union's cooperation with China within the framework of the initiative.