Located in the downtown, the center, which covers nearly 2,500 square meters, has an exhibition hall, a library, a multi-functional theater and classrooms for language teaching, painting, music, dance and so on. 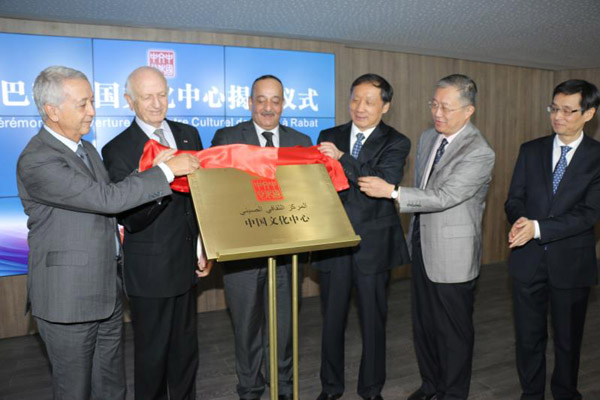 "It is of great significance for China and Morocco to further strengthen exchanges and cooperation in culture and tourism," said Li Jinzao on the ceremony.

"It is hoped that the China Cultural Center in Rabat will play a major role in promoting the communication between the two peoples under the Belt and Road Initiative," Li added.

Mohamed El Aaraj said that Morocco attaches great importance to the cultural exchanges and interactions with China, believing that the China Cultural Center in Rabat will play an important role in promoting mutual understanding and friendship between the two sides.

The guests visited a photo exhibition featuring the accomplishment over the five years since the Belt and Road Initiative was proposed by China in 2013, a show of chinese intangible cultural heritage such as tea art, brocade embroidery and lacquerware as well as traditional music performances from both countries.

China International Publishing Group (CIPG) donated more than 300 books to the cultural center which were enriched into the center's library. Moroccans will access to the books that introduce China in Chinese, Arabic, French and English in the library for free.

Chen Dongyun, cultural counselor of the Chinese Embassy in Morocco, said that after more than two years of efforts, the 36th China cultural center of its kind was officially launched in Rabat.

The cultural center will organize various cultural events such as exhibitions, film screenings, lectures, trainings and cultural performances for the Moroccan people to know more about China, she added.

The China Cultural Center in Rabat is jointly operated by the Chinese Ministry of Culture and Tourism and the Chengdu Municipal Government.

China has started to establish cultural centers oversea since the 1980s in order to enhance cultural exchange for China and other countries.