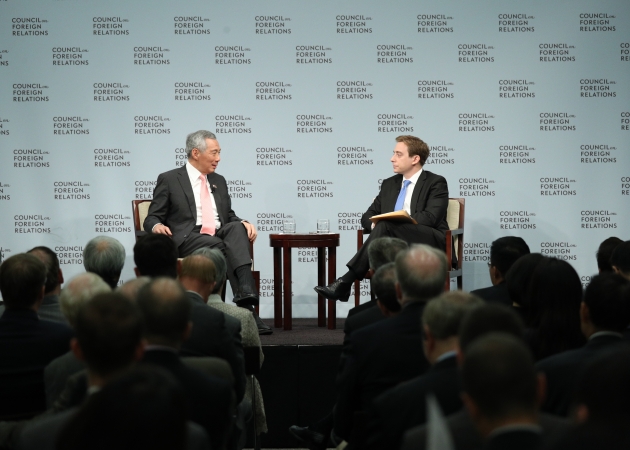 Washington- "The key thing is the presidency is still sitting in the driver's seat, setting the direction." Singapore Prime Minister Lee Hsien Loong talked about the latest National Congress of CPC at a dialogue at the Council on Foreign Relations (CFR) in Washington.

Addressing the role China plays in Asia, the Prime Minister said, "It's got a Belt and Road Initiative, which is a grand strategic plan to enable it to participate in the prosperity of the region and to prosper its neighbors while it grows its influence. And it's a scheme which many of its neighbors would like to participate in. And it's got an AIIB, Asia Infrastructure Investment Bank, which will be providing financing and urgently-needed infrastructure for lots of countries, developing and more developed.”

Prime Minister Lee Hsien Loong's visit comes as President Trump prepares for a trip to Asia next month. Asked about his expectation of China-US relationship, the Prime Minister said, he hopes the two sides can “establish a shared frame of reference, a mutual understanding".

Singapore has maintained a close economic link with China for decades. Answering Osnos' question about China's current economy, the Prime Minister remarked "there is a lot of energy and vibrancy". He noted that Zhongguancun, a digital center in Beijing, and Shenzhen, have already become innovation hubs. "The quality of the people and the quality of the companies which are being generated, the technology, are equal to any in the world.”