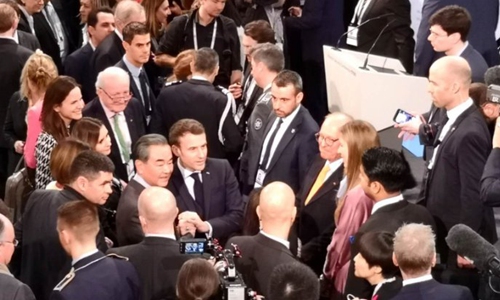 (Photo: Courtesy of Ministry of Foreign Affairs of the People's Republic of China)

At the 2020 Munich Security Conference over the weekend, US Secretary of State Mike Pompeo, Secretary of Defense Mark Esper and House Speaker Nancy Pelosi launched a joint war of rhetoric against China. They labeled China the top potential adversary of the US and spared no efforts hyping the "China threat," denting existing international relations and the current international dynamics.
The annual Munich Security Conference was originally a platform to discuss transatlantic relations between the US and its European allies. Later its agendas extended to global security issues and the organization also invited non-European countries including China to attend.
The theme of this year's conference was special. Organizers coined a new term: "Westlessness." The US, meanwhile, sent three heavyweights, in a bid to reshape the US-led Western camp.
In the past when US politicians talked about the "China threat," they tended to emphasize this affected the continuation of US global leadership. But nowadays, they have expanded their rhetoric to the sphere of Western civilization and a matter of the existence of the US-led world order. By exploiting China's progress in 5G technology, they have labeled China as a threat to Western civilization. They have also threatened their allies that reliance on Chinese 5G vendors could render their critical systems "vulnerable to disruption, manipulation and espionage."
Regardless of the theme or the American antics, this year's Munich conference is a manifestation of Washington's anxieties in wooing Europe. For a long time, the US has suppressed its European allies beyond the anticipation of Europeans. But at the same time, the US needs European support so as to consolidate its hegemonic position in the Western camp.
US interests to a large extent depend on the US as the main force of an alliance system while its allies enjoy the stability and opportunities brought about by that system.
Today's global political and economic pattern is changing drastically. Unilateral US interests have clashed with the multilateral interests of the Western camp.
The contradictions between unilateralism and multilateralism hidden in the alliance system are becoming sharper and irreconcilable. This cannot be solved by establishing a common enemy. The interests of Europe converge with many developing countries including China. The European continent needs cooperation with these countries. US demonization of the Chinese system cannot sustain Western unity.
The US cannot accept China's success and has attempted to decouple from China in various fields including economy, trade and technology, which reflects its ideological prejudice and shows that it has not yet been able to take a fair view of the multipolar world. This is precisely the problem which leads to the country's poor development in certain technology domains as well as its continuous political dilemmas.
Identifying China as a target has deadly loopholes. China's progress and achievements, including in 5G technology, have been made through reform and opening-up, which has shown the country's inherent development capability and the Chinese system's vitality.
This is the reason why the question raised by China's former vice foreign minister Fu Ying for Pelosi at the conference drew applause from the audience: "How come if Huawei's technology with the 5G is introduced to the Western countries then it will threaten the political system? Do you really think that the democratic system is so fragile that it could be threatened by this single high-tech company?"
This scene in Munich shows us that some elites in Washington are not only imposing their purpose - defining China as an enemy - on Europe and the world, but also destroying the existing international system. They have cast a deep shadow on global peace and development in the 21st century.
But no force in the world can stop China's development. China needs a peaceful and stable external environment, and it needs to strengthen cooperation with all countries in the world, including European countries. China-EU cooperation is even more important especially when a major world power abandons international cooperation and pursues unilateralism.