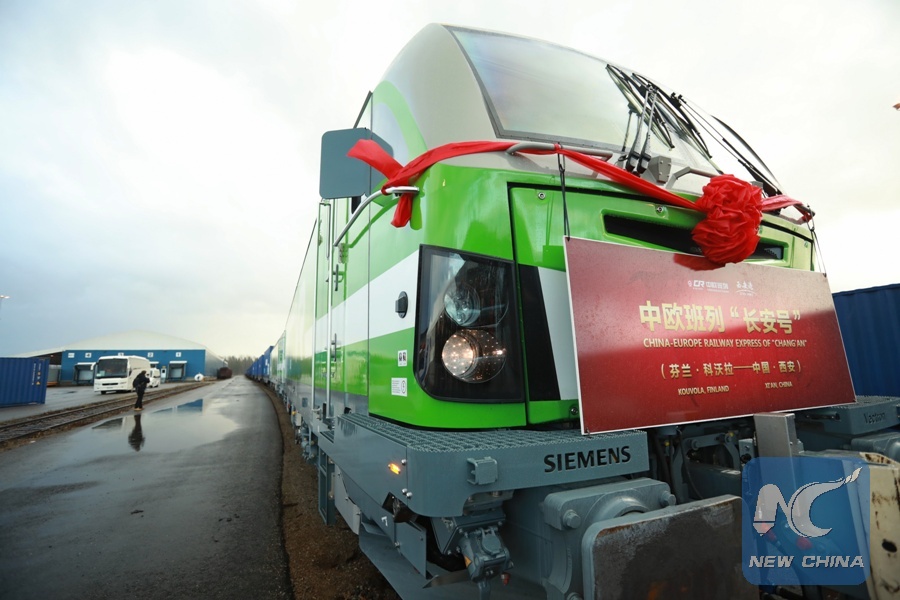 China and Europe, each located at one end of the Silk Road, are natural partners in the Belt and Road Initiative, according to Zhang Ming, head of Mission of the People's Republic of China to the European Union.

With joint efforts, the initiative and Europe's development strategies are creating synergy, he added.

In an article published on the Euractiv website on Thursday, Zhang recalled his first Chinese Spring Festival celebration in Brussels last month.

"It was unforgettable to see Chinese lanterns illuminating the Grand Place, the world's most beautiful square as described by French writer Victor Hugo. It was exciting to see the Galeries Royales Saint-Hubert decorated with Chinese red lanterns, bringing a moment of happiness to my European friends. Again, I was fascinated by the perfect fusion of Chinese and European cultures," he said in the article.

More than 700 years ago, The Travels of Marco Polo invoked Europeans' curiosity of the East. Numerous trailblazers made strenuous efforts to connect Europe with Asia, and finally, opened up the ancient Silk Road.

"Today, China and Europe are bound together by faster transportation, closer commercial ties and more diverse cultural exchanges. Despite its long history, the spirit of the ancient Silk Road, namely the respect for diversity and the pursuit of common prosperity, is still alive and relevant," said Zhang.

Since it was launched over four years ago, the Belt and Road Initiative (BRI) has received wide support from more than 100 countries and international organizations, more than 80 of which have signed agreements with China. The first Belt and Road Forum for International Cooperation held last year in Beijing produced fruitful results, and contributed to a global consensus on Belt and Road cooperation.

"Governments of 11 EU member states have signed BRI cooperation documents with the Chinese government," said Zhang, noting that the EU's foreign trade will increase by 6 percent because of the Initiative, according to the Brussels-based economic think tank Bruegel.

"The China-Europe express freight trains are busy traveling across the Eurasian continent. In 2017, a total of 3,673 trips were made, up by 116 percent from 2016 and exceeding the total number combined during the past six years. The train services reach 36 European cities in 13 countries and make the access of European goods to the Chinese market much easier," said Zhang.

"In addition, a great number of projects are well underway, such as infrastructure, logistics, ports, e-commerce and finance. For instance, in Serbia, a Chinese enterprise bought a troubled steel mill and turned it around in less than a year. In Greece, the Port of Piraeus regained its position as one of the largest ports in Europe. In the United Kingdom, China is partnering with France to build a nuclear power plant, a stellar example of tripartite cooperation under the Initiative," said the ambassador.

However, according to Zhang, the potential of the Belt and Road Initiative will be brought to the full only when all players come to realize its importance and take part in it.

To that end, he reasserted three basic facts.

Firstly, the Initiative is definitely not a unilateral strategy or China's "Marshall Plan," as some have called it. On the contrary, it is designed to promote cooperation that is open to all.

"The Initiative aims to promote economic cooperation through infrastructure connectivity, and to bring about common development by leveraging the comparative strengths of all participants. As a global public good, the Initiative follows the golden rule of extensive consultation, joint contribution and shared benefits. All parties get involved and gain benefits on an equal footing," said Zhang.

Secondly, the initiative is not a one-way street allowing only China to export its resources, market opportunities, technologies, projects and manpower. Rather, it is based on wide consultation and communication.

"All Belt and Road projects have to go through well-informed feasibility studies conducted by interested parties, and must follow market principles and international rules. All projects must be results-oriented, high-standard and sustainable. Our goal is not only to strengthen the physical connectivity of infrastructure, but also to improve the institutional connectivity of rules and standards," said Zhang.

Thirdly, the BRI aims to establish a regional economic cooperation platform that is inclusive, balanced and beneficial to all. It is not meant to reinvent the wheel, rather, it seeks to complement the existing bilateral and regional cooperation mechanisms.

"Rome wasn't built in a day. The Initiative is such a great undertaking that it has to involve many participants, including those from Europe. While each participant comes from different backgrounds and has different needs, we respect such diversity and value flexibility in our cooperation instead of insisting on uniformity," said Zhang.

"In our world today, protectionism and isolationism are still taking a toll. China, with its 40 years of reform and opening-up, has made its stance clear: openness brings progress, while self-seclusion leaves one behind."

"We remain committed to partnering with our European friends in an open spirit. Let's consult, contribute and share together to make a success of the Belt and Road Initiative," he concluded.

The Belt and Road Initiative aims to build trade and infrastructure networks connecting Asia with Europe and Africa along the ancient Silk Road routes. It comprises the Silk Road Economic Belt and the 21st Century Maritime Silk Road.