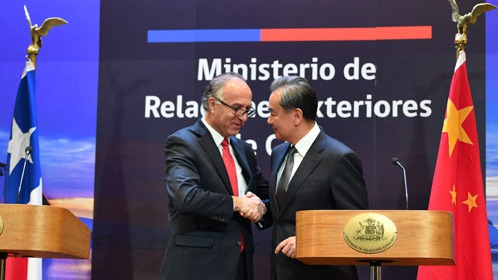 China firmly supports Chile's participation in the China-proposed Belt and Road Initiative (BRI) and is ready to cooperate closely with Chile on trade and investment, Chinese State Councilor and Foreign Minister Wang Yi said on Sunday during his visit to Chile.

China is willing to work with Chile to foster new economic growth driver, such as scientific and technological innovation and the digital economy and make Chile an important hub of BRI, said Wang in a joint press conference with his Chilean counterpart Teodoro Rivera, following a meeting of BRICS foreign ministers in Brazil.

China is an important member of APEC and a staunch advocate, supporter and promoter of Asia-Pacific economic cooperation, Wang said in an interview with Chile's El Mercurio newspaper.

China expects the upcoming APEC Economic Leaders' Meeting in Santiago to promote regional economic integration, advance the building of the Free Trade Area of the Asia-Pacific, and encourage APEC to send a positive signal of promoting free and open trade and investment, supporting the multilateral trading system, and opposing protectionism, said Wang in the interview.