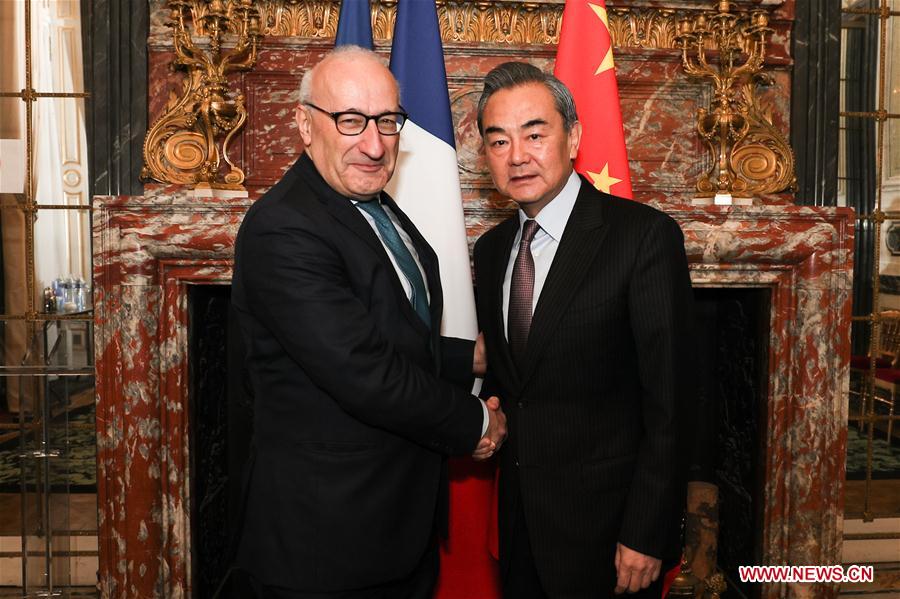 Wang made the remarks while meeting with French president's diplomatic advisor Philippe Etienne for the 18th consultation of the coordinators for the China-France Strategic Dialogue.

As this year marks the 55th anniversary of the establishment of diplomatic relations, Wang noted China and France look forward to taking it as an opportunity to deepen bilateral ties.

The Chinese top diplomat said both sides should give full play to the China-France Strategic Dialogue, strive to accelerate the upgrade of Sino-French pragmatic cooperation, and insist on seeking more common interests under the principles of fairness, open, mutual benefits and win-win results.

Two-way trade and investment should be boosted between China and France, Wang said, adding that China welcomes France could continue taking part in the China International Import Expo actively and is ready to import more quality French products according to market needs.

China is willing to strengthen the alignment of respective policies and development strategies with France, and improve cooperation in exploring the third-party market, Wang said.

China is also willing to align the Belt and Road Initiative with the European Union's Euro-Asian connectivity strategy, and conduct cooperation with the EU based on the spirit of openness, inclusiveness and transparency, Wang said.

He also stressed China's readiness to strengthen communication with France within the framework of the UN, G20 and the World Trade Organization (WTO) to safeguard multilateralism and multilateral trading system together for the development of globalization in a more balanced and inclusive way.

On his part, Etienne said he has had fruitful talks with Wang during the 18th consultation of the coordinators for the China-France Strategic Dialogue.

France is willing to make joint efforts with China to boost bilateral comprehensive strategic partnership through the mechanism like the strategic dialogue, said Etienne.

The official highlighted that France is ready to beef up the cooperation with China on trade and investment, as well as in the important fields like nuclear energy, aviation and aerospace.

He noted that France is ready to strengthen cooperation with China on the fight against unilateralism, G20 agenda, realizing the Paris agreement on climate change and others, and to join hands with China to safeguard the multilateral trading system which puts the WTO at its heart.