China-Germany ties at a glance

This is Merkel’s first visit to China after her re-election and the 11th as chancellor.

As bilateral ties have developed well in recent years, let’s take a look at some highlights of high-level exchanges, pragmatic cooperation and people-to-people exchanges.

The diplomatic relations between China and Germany were established in October 1972, and the ties have been enhanced by frequent exchanges of high-level visits. 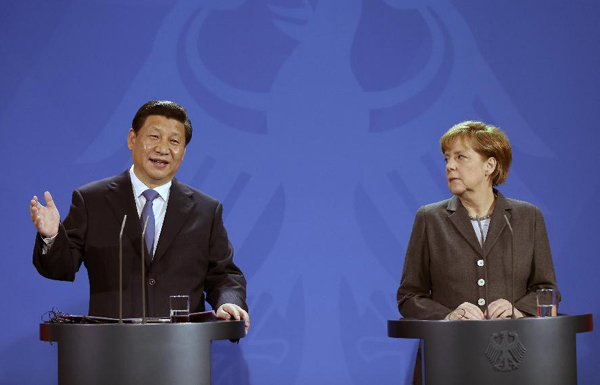 During President Xi Jinping’s first visit to Germany from March 28 to 30 in 2014, he and Merkel agreed on a comprehensive strategic partnership, pointing the direction for the development of bilateral ties in a new era. The two sides have established inter-governmental consultation as well as more than 70 other dialogue and cooperation mechanisms at various levels. 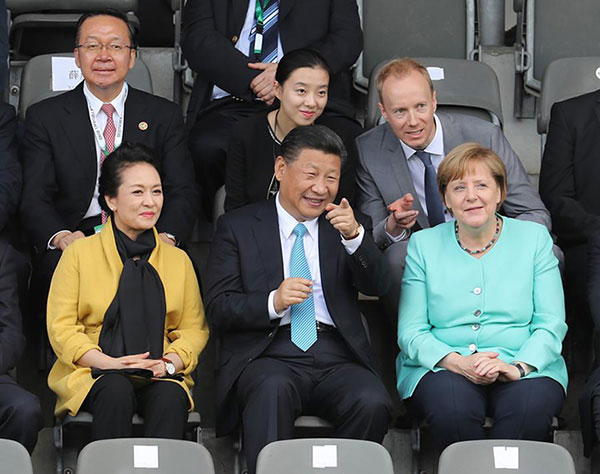 From July 4 to 8 in 2017, President Xi Jinping paid his second state visit to Germany and attended the annual summit of the Group of Twenty major economies in Hamburg, sending a strong message to the world that both sides are committed to enhancing political trust and facilitating free trade and economic globalization. 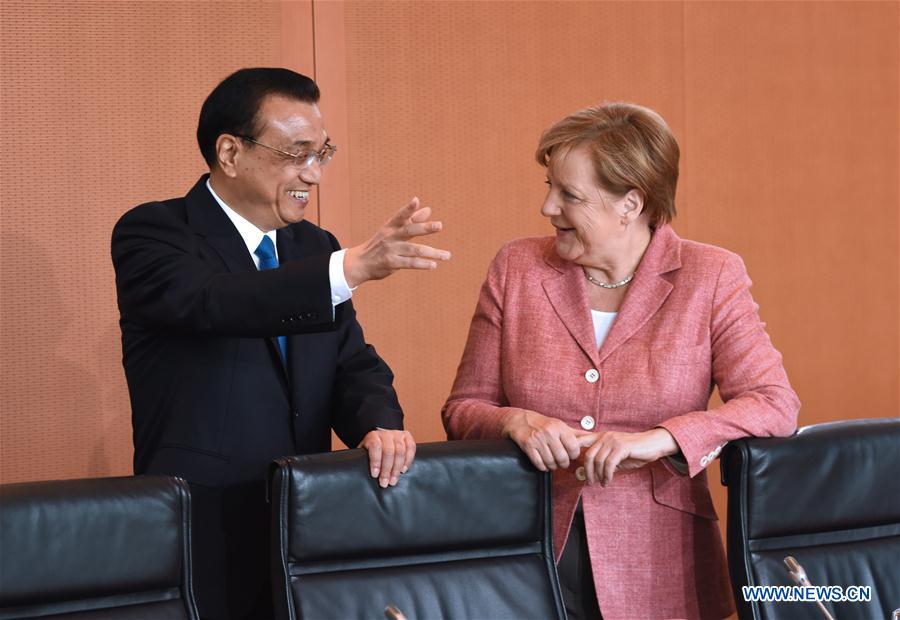 Chinese Premier Li Keqiang holds talks with German Chancellor Angela Merkel during an annual meeting between the heads of the two countries' governments in Berlin, May 31, 2017. [Photo/Xinhua]

Premier Li Keqiang has paid three official visits to Germany as the two countries have agreed on regular political dialogue and intergovernmental consultations since 2004.

Li, in his third visit to Germany as premier, said Beijing and Berlin should further promote liberalization and facilitation of trade, and deepen cooperation in areas such as manufacturing, energy, aviation and innovation to better synergize Made in China 2025 plan with the German Industry 4.0 initiative during the annual meeting of heads of the Chinese and German governments on May 31, 2017. 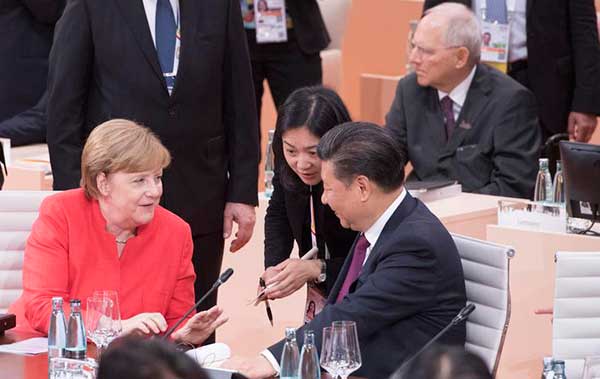 President Xi Jinping talks with German Chancellor Angela Merkel before the 12th Summit of the Group of 20 major economies in Hamburg, July 7, 2017. [Photo/Xinhua]

Coordination and cooperation between the two countries in international and regional affairs have become closer. 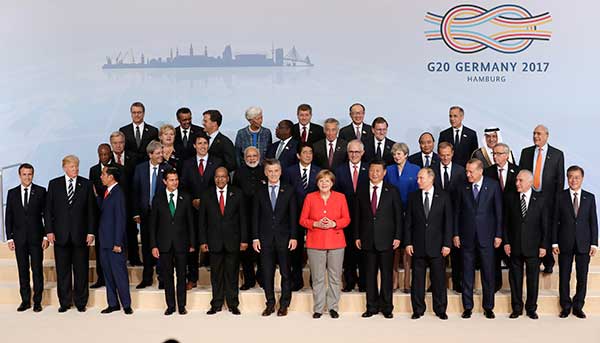 The G20 Summit participants pose for a group photo on the first day of the summit in Hamburg, on July 7, 2017. [Photo/Agencies]

German Chancellor Angela Merkel has said that Germany wants to strengthen multilateralism with China and she is looking forward to her visit to China in a podcast published on May 19.

Ties between the two countries have weathered global upheavals with joint efforts to handle differences through equal dialogue and friendly consultation, and create mutual support on major global issues such as economic globalization and multilateralism, opposition to protectionism. 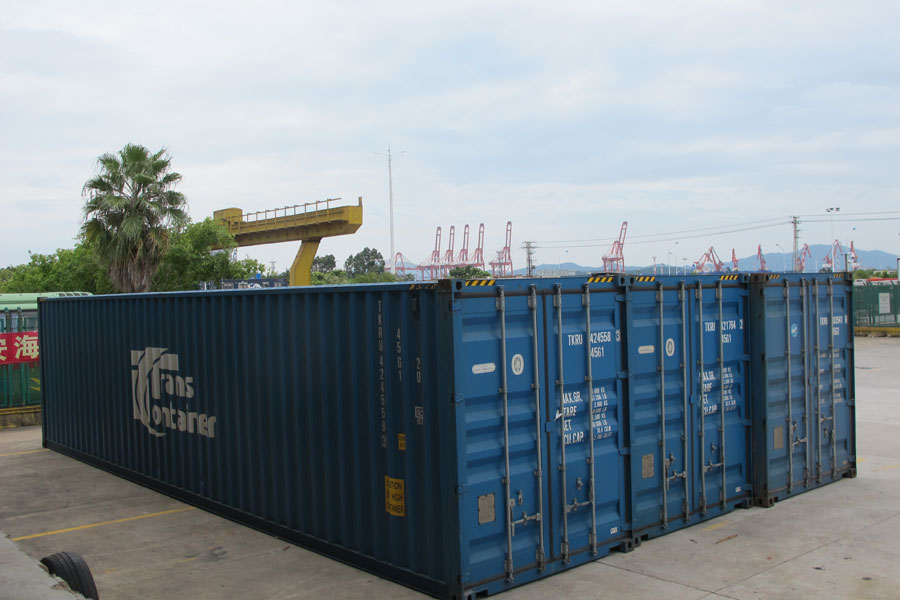 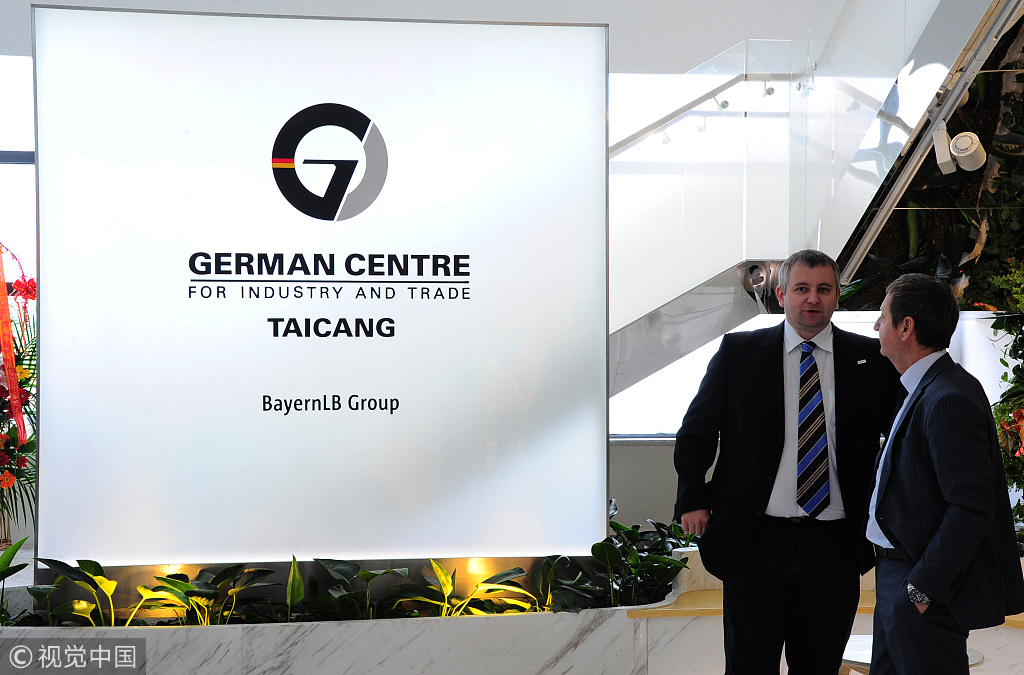 Guests from China and Germany visit the German Center for Industry and Trade in Taicang, Jiangsu province of China, June 2, 2016. [Photo/VCG]

Germany is Europe’s biggest investor in China. By the end of 2017, Germany directly invested in 9,781 projects in China, and the German side invested $29.72 billion in areas such as automobile, chemical industry, power generation equipment, transportation, steel, communication, etc.

According to China’s Ministry of Commerce, China has invested over $10.12 billion in Germany’s non-financial projects by the end of 2017. In 2017, China’s non-financial direct investment to Germany rose $2.28 billion.

Cooperation under the Belt and Road Initiative 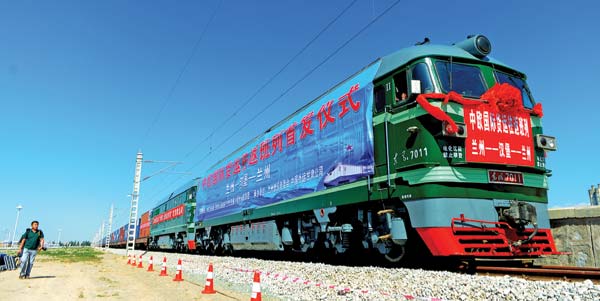 China welcomes Germany to participate in the Belt and Road Initiative to help boost the relations between the two countries, as President Xi Jinping published a signed article titled “To Make the World a Better Place” on mainstream German media ahead of the annual summit of the Group of Twenty major economies in 2017, in Northern German city Hamburg. Two technicians inspect an engine on the C919, China's first domestically produced single-aisle passenger jet, after a taxiing test on May 3, 2017. [Photo by Yin Liqin/China Daily]

Germany ranks the top among European countries in terms of technology transfer to China.

Premier Li Keqiang stresses deeper technological cooperation with Germany in his congratulatory message to the 5th innovation conference between China and Germany on Feb 27, 2018.

He said he hopes both China and Germany will better cooperate through tapping the potential of both countries and deepen technological innovation to promote a healthy development of both societies.

The premier called on Germany to help China-built large passenger plane C919 get an air worthiness certificate from the European Union. Airworthiness is the measure of an aircraft's suitability for safe flight. 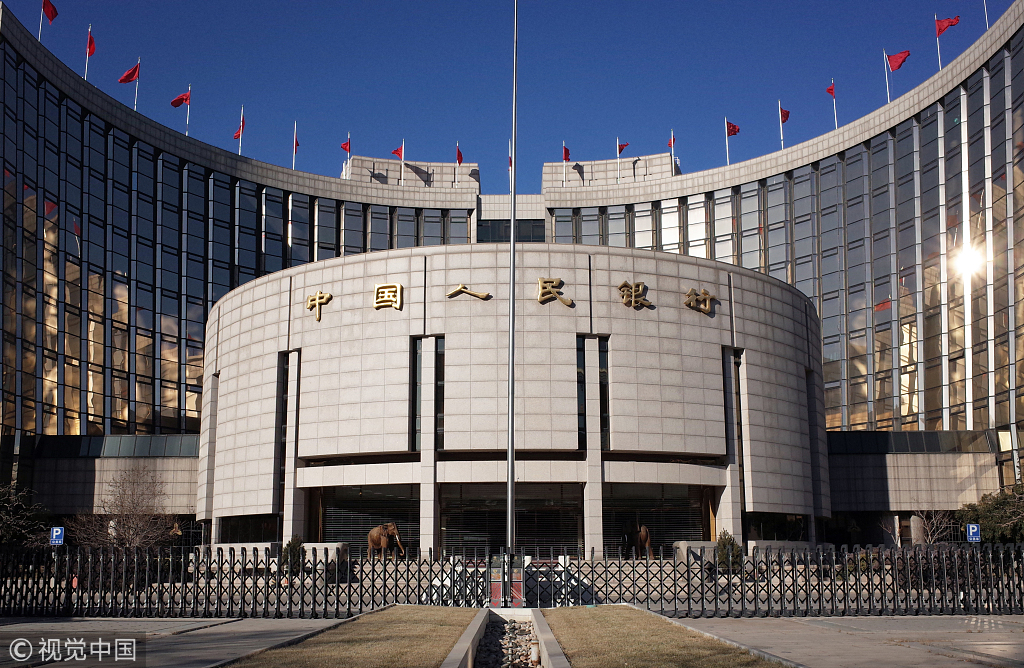 File photo of the headquarters of People’s Bank of China in Beijing. [Photo/VCG]

China decided to grant Germany an annual quota of 80 billion yuan ($12.6 billion) to invest on the Chinese mainland along with the status of Renminbi Qualified Foreign Institutional Investor (RQFII) during Merkel’s visit to China in July 2014.

The China-Germany high-level people-to-people exchange dialogue mechanism was officially launched in May 2017. The mechanism is to deepen cooperation in education, science, technology, culture, youth, political parties, think tanks, media, and promote personnel exchanges between both countries and cooperation in tourism. 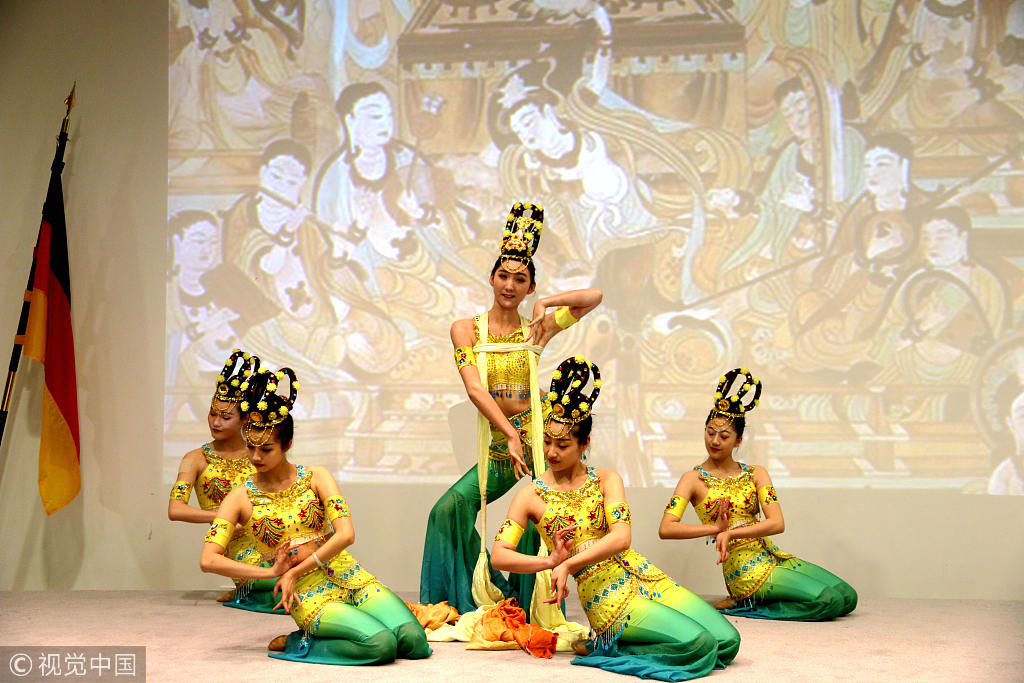 Performers from Hubei province dance at the opening ceremony of the 2018 Germany-China Hubei Cultural Festival in Berlin, on April 13, 2018. [Photo/VCG]

The two countries signed the Agreement on Cultural Exchange in 1979. Since then, frequent activities have been conducted in cultural contacts, artistic expositions and commercial performances.

For example, the Chinese Culture Center opened in Berlin in 2008 providing a window for exchanges and mutual understanding; Activities were held in more than 40 cities in Germany during the 2012-2013 Chinese Culture Year; China and Germany held many activities for the Language Year in 2013; and the year 2016 was called the China-German Youth Exchange Year.

In February this year, two books from China, The Art of Gardening and the Tea Canon, were named “The Most Beautiful Books in the World 2018” by the Stiftung Buchkunst at Leipzig, Germany.
This is the third consecutive year that China has two winning entries in the competition. 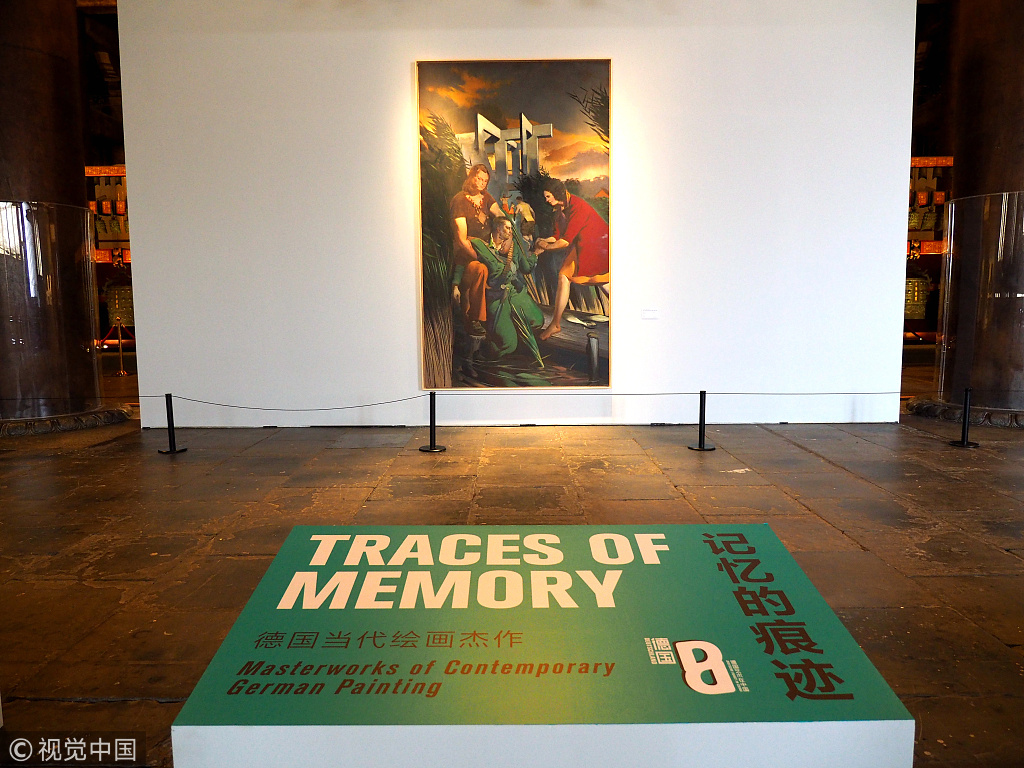 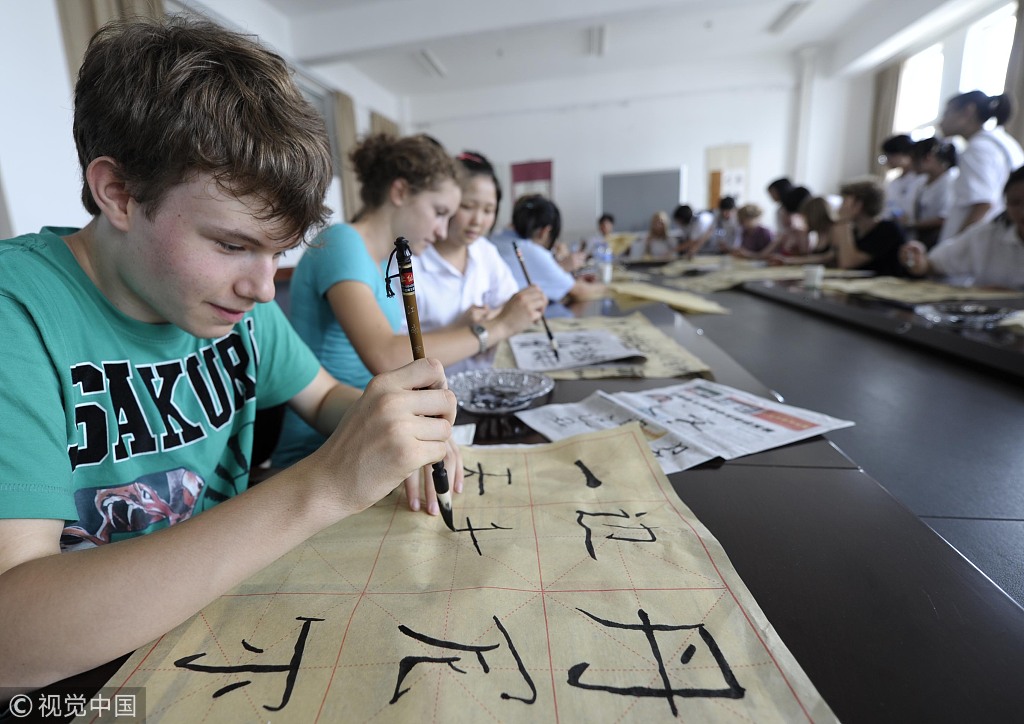 China started to send students to Germany in 1974.

The Goethe-Institute is Germany’s worldwide cultural institute. Established in 1988, its Beijing branch was the earliest overseas cultural organization in China.

The two countries signed a mutual recognition agreement on higher education qualifications in April, 2002, the first of its kind signed by China and a developed western country.

By the end of March 2018, there were 19 Confucius Institutes and six Confucius Classrooms in Germany. 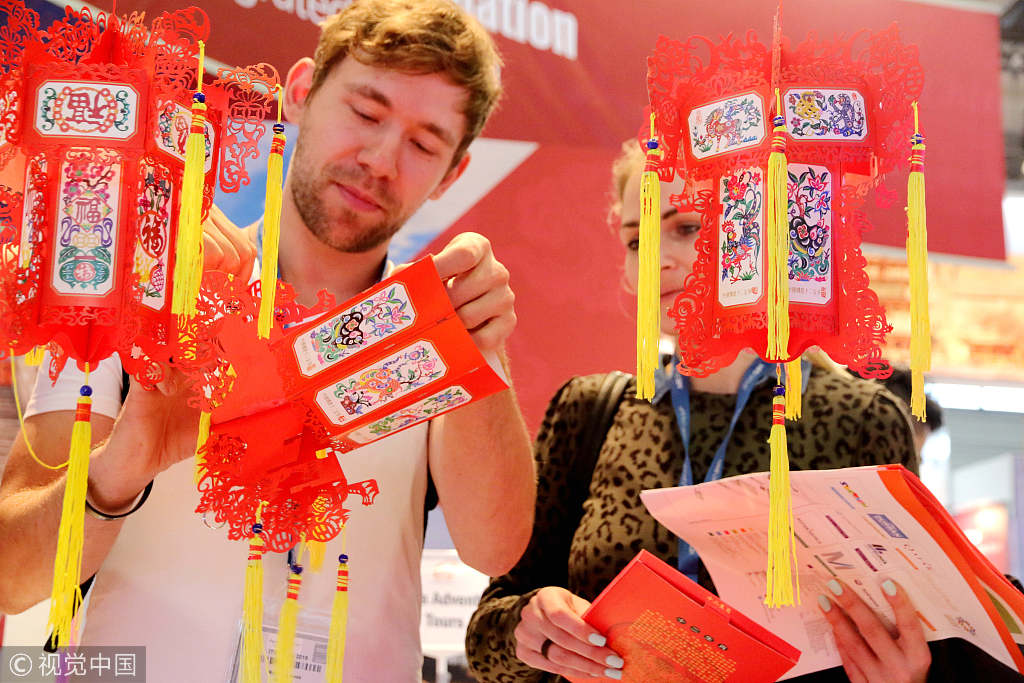 A visitor learns to make Chinese lantern at the opening ceremony of the 52th ITB Berlin in Berlin, on March 7, 2018. [Photo/VCG]

First Chinese tour groups set off for Germany in February 2003.

In 2017, 635,500 Germans visited China, up 1 percent compared to the year before. Germany is China’s largest source of travelers from Europe. 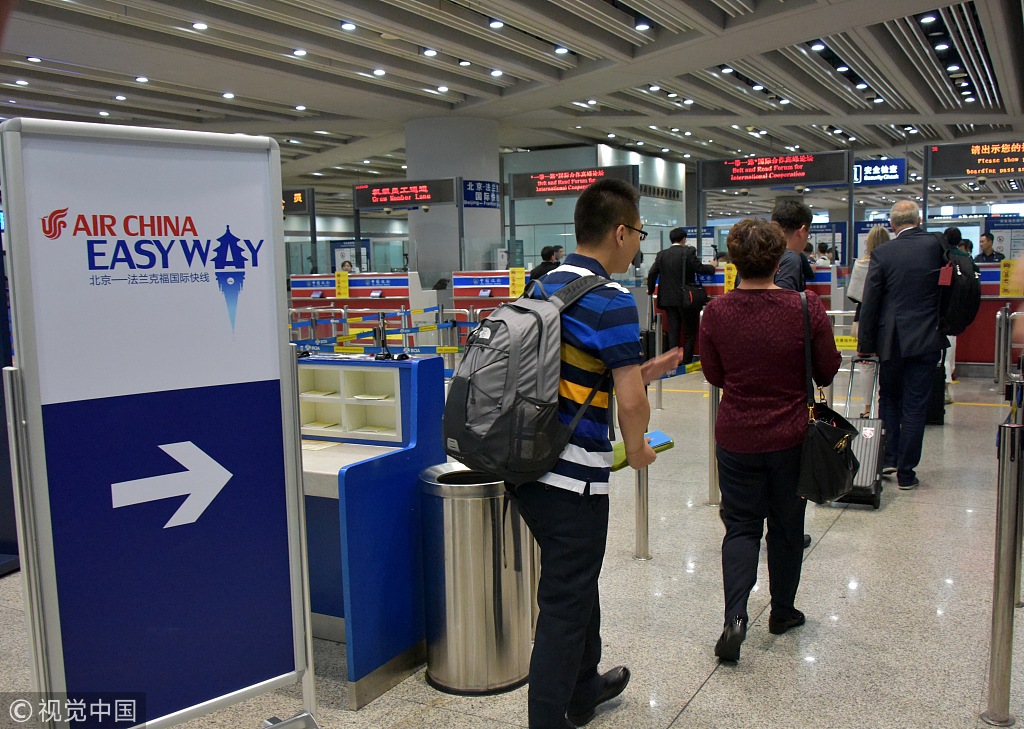