The Tissapura Junior School in Hambantota in Sri Lanka’s southern province was a picture of joy on Oct. 18. Led by Principal A. H. Weerakeerthi, the kids were singing and dancing happily. 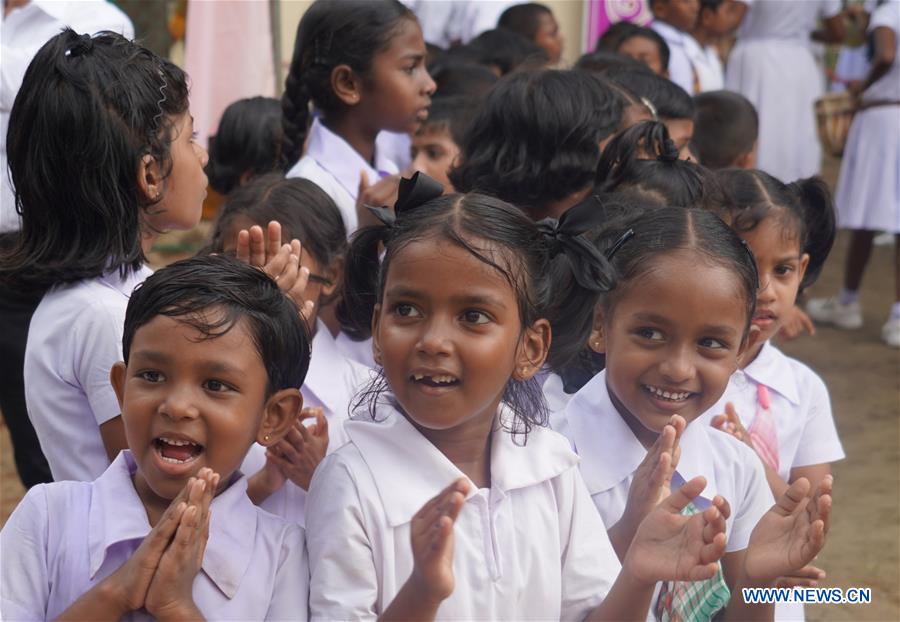 Students welcome guests attending the inauguration of a new school building at the Tissapura Junior School in Hambantota of Sri Lanka on Oct. 18, 2019. The Tissapura Junior School in Hambantota in Sri Lanka's southern province witnessed the inauguration of a two-storyed new school building built by the China Merchants Charity Foundation on a free of charge basis. (Photo: Xinhua)

The occasion was the inauguration of a two-storyed new school building that was built by the China Merchants Charity Foundation, on a free of charge basis.

The inaugural ceremony was attended by Sri Lankan and Chinese dignitaries like Cheng Xueyuan, China’s Ambassador to Sri Lanka, Y. Wickramasiri, Secretary of the Southern Province Education Ministry, and Ray Ren, CEO of the Hambantota International Port Group. Principals of other schools and residents of other villages in the vicinity were also present.

Young Nethma Dinethri who spoke on behalf of the students at the inaugural function was effusive in her remarks. “Today is our happiest day,” she declared with pride.

“We have a brand new building which is also equipped with a computer room and a music room, and a brand new library. In such a teaching environment, our studies will be more productive. I appreciate the Chinese company and the Chinese Embassy for lending a helping hand to create such a wonderful learning environment," Nethma said.

Principal Weerakeerthi recalled the origin of the school building project. A few years ago he had met Ray Ren, who was then the CEO of the Colombo International Container Terminal. Weerakeerthi told Ray Ren that he was originally a music teacher with 30 years experience but in 2017, he volunteered to be principal of a school in a remote and poverty stricken area to be of service to the people there. This landed him in the Tissapura Junior School in the Hambantota district.

The Tissapura Junior School is one of three government schools in the Weerawila area, 20 km from the port of Hambantota. The school was founded in 1986. Currently it has about 300 students and 24 teachers. The school had been in disrepair for a long time. Some classrooms had been eroded by termites, wooden roofs had collapsed, and students of different grades had to share the same classroom.

Improving the conditions in the school became Principal Weerakeerthi's main goal. Help came from the China Merchants Group involved in the running of the Hambantota port.

“The Chinese company agreed to help us build a two-story teaching building with facilities to improve the educational environment,” Weerakeerthi said.

But the principal was suddenly stricken by cancer and his condition deteriorated rapidly. In order to ensure the progress of the project, Weerakerthi had to come back to work quickly. He modified his medical treatment to suit the task he had undertaken.

"I could not opt out of the project as the teachers and students of the whole school were looking forward to the teaching building as much as I myself did,” Weerakeerthi said.

After about a month of medical treatment, he returned to the school to supervise the construction.

"I promised my Chinese friends that I will definitely return to complete the project. I was determined to bring benefits to the children of the school and also the villagers of the area. It is this spirit that helped me overcome the disease," Weerakeerthi said.

Looking at the newly completed school building, the principal announced his new wish, which was to upgrade the Junior School to a High School.

“If local students can get to a High School within the village itself, they need not travel to distant places every day and be a source of worry to their parents,” Weerakeerthi said.

“But a high school must have teachers of the appropriate kind and also the necessary equipment. The new teaching building and office facilities that the Chinese company has given us will help upgrade the school. Next we need to raise the level of the teachers and the quality of teaching," he added.

The Secretary of the Southern Province of Sri Lanka Education Bureau, Y. Wickramasiri, responded positively to the Principal’s proposal.

Cheng Xueyuan, Chinese Ambassador to Sri Lanka, said that the spirit of Principal Weerakeerthi will ensure a bright future for the school.

“China will continue to strengthen and broaden cooperation with Sri Lanka in the field of culture and education. The Chinese Embassy will continue to promote campus construction projects to enable children to have a better learning environment and make them enjoy their studies,” Cheng said.