"China highly appreciates President Putin's positive comments on the Belt and Road Initiative (BRI) and the Russian side's active support and participation in the initiative. Russia is an important partner for China to promote international cooperation on the BRI," said Lu Kang, the spokesperson of China's Ministry of Foreign Affairs (MFA). 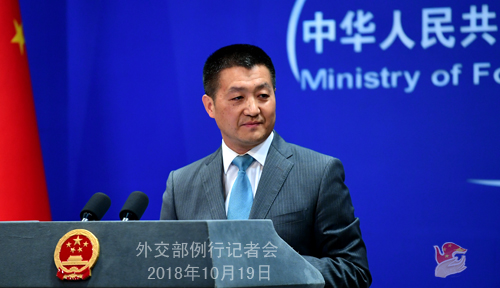 "In 2015, Chinese President Xi Jinping and Russian President Putin jointly signed and issued the Joint Statement on Cooperation of Connection Between the Silk Road Economic Belt and Eurasian Economic Union (EEU), starting the integration and cooperation process between the construction of the BRI and the EEU. At present, the cooperation goes on steadily.

"In May this year, the Chinese side and the EEU side signed the Trade and Economic Cooperation Agreement between the People's Republic of China and the Eurasian Economic Union, promoting early results of integration and cooperation. Under this framework, the integration of China and Russia's development strategy has deepened. The two countries have developed rapidly in pragmatic cooperation in the fields of economy, trade, investment, science and technology. The two sides have also achieved a number of major achievements in the interconnection of infrastructure such as energy management networks.

"China is willing to work with Russia to build the BRI and focus on the five cooperation priorities (policy coordination, facilities connectivity, unimpeded trade, financial integration and people-to-people bonds). We will continue to deepen the integration of policies and systems, enrich the content of pragmatic cooperation, expand the new direction of sea channel construction, and jointly build the BRI as an important channel for promoting global economic growth and international economic cooperation," Lu said at a regular press conference on Friday.