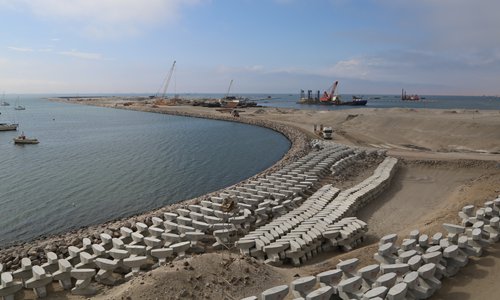 The handover ceremony of the Walvis Bay new container terminal project in Namibia, which was built by China Harbour and is the largest single infrastructure project since the founding of the Republic of Namibia in 1990, was held on August 2.

With the new container terminal completed, loading efficiency will see a leap, which will boost economic development in Namibia, Feng Yuanfei, the project manager of the Walvis Bay project from China Harbour, told the Global Times.

Hage Geingob, president of Namibia, attended the ceremony and said Walvis Bay will be transformed from a major fishing port into a logistics hub for the international market, the Xinhua News Agency reported on August 3.

The Chinese government signed memoranda of understanding on the Belt and Road Initiative with the Namibian government in September 2018, according to China News Service.

Feng said that the successful completion of the project will surely further deepen economic and trade cooperation between China and Namibia, especially under the Belt and Road Initiative.

The project has created more than 2,000 local jobs and trained more than 600 skilled workers, according to China Harbour. 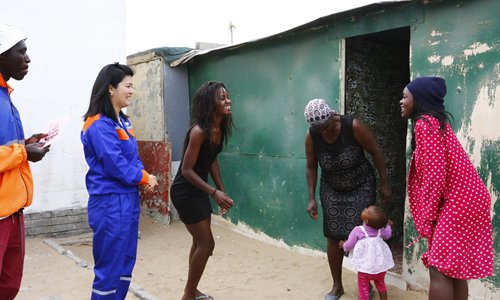 Chinese staff from China Harbour visit the families of local workers on Christmas.

The new container terminal and oil storage project began construction in 2014 and 2015 respectively.

The main challenge of the project was the uneven settlement caused by the deep diatomite geology in Walvis Bay, Lan Fengping, deputy construction manager, told the Global Times.

"I was losing sleep at that time, because it's a rare problem anywhere in the world. We consulted many engineering experts but no one had experience in dealing with uneven settlement caused by diatomite geology," Lan said.

Diatomite is a soil of high compressibility and low density. Once the applied stress exceeds its previous consolidation stress, the structure will undergo drastic changes, and the compressibility of the soil will suddenly increase, resulting in a large settlement.

The buried depth and thickness of the deep diatom layer in the storage area are uneven, which will lead to uneven settlement under the loading of superstructures and containers, Lan explained.

Research into the engineering properties of diatomite is still lacking both in China and abroad.

After going through all the information, Lan found that only a few parts of the world, such as Mexico City and Japan's Osaka Kansai Airport, have encountered the problem of diatomite layers during construction.

Lan told the Global Times, "the company never runs away from problems, but we try our best to solve them."

"Even building the preloading areas for the experiment took around two months. Six surveyors were continuously measuring and recording the settlement, porosity and inclination, etc., from which we wanted to discover the settlement law," Lan explained.

Technical experts from nearly 30 different countries participated in discussions and research, and after four months were finally able to solve the problem.

In August, the new container terminal project was handed over to the Namibian Port Authority.

This solution not only enabled China Harbour to complete a project according to the contract, but also led to a successful technological breakthrough for Namibia and even the world, Lan said. 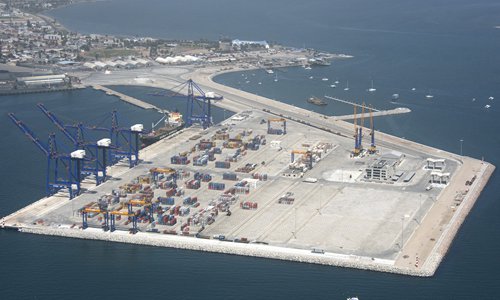 The new container terminal of the Walvis Bay project by China Harbour.

In 1998, Namibia became the first country in the world to include environmental protection in its constitution, according to the Economic and Commercial Counselor's Office of the Chinese embassy in Namibia.

There are many tourism resources in Walvis Bay, and oyster breeding farms and seal islands are also located nearby.

The project department hired professional organizations to carry out 24-hour inspections of water quality and noise, and worked with local organizations to study the impact of the operation's activities on dolphins, according to China Harbour.

The new container terminal includes two container terminals with a 600-meter-long quay wall, with berthing structure designed to accommodate vessels of up to 8,000 TEU, a 400,000 square-meter stacking yard, a floating breakwater for docking yachts, and corresponding railway, power supply and other supporting facilities, as well as four advanced ship to shore cranes (STS) manufactured by China.

Feng told the Global Times that China is renowned worldwide for its infrastructure technical ability, and its international business ability has improved a lot in recent years, especially under the Belt and Road Initiative. He added that focusing on health, safety and environment management also helps to further develop its soft power building.

"To undertake overseas projects, we must first overcome the differences in language and cultural habits. China Harbour respects local culture very much, and localization is the highlight of our project management," Feng said.

At the beginning of the project in September 2014, 70 local workers held an illegal strike after they found out they would not be rehired when their three-month contracts expired.

According to local laws, the labor union had to first submit an application to the ministry of labor, stating the demands and the time and mode of the planned strike. Only after the ministry of labor issues a certificate of investigation can the strike be deemed legal, Afrisay explained to China Harbour.

However, the workers did not follow this procedure, Feng said.

"The strike made project staff nervous and worried, as we didn't know the facts and were unfamiliar with the local labor law," Feng recalled.

Finally, China Harbour received an apology and decided not to fire the workers but gave them a one-year warning.

Most overseas enterprises will give up in the face of strikes. However, the project department adhered to the local laws this time and handled the strike successfully by being rational and moderate, which won the respect of local workers, media and government, Feng said.

Zelda Garoes, a secretary from Namibia who started her journey at China Harbour in April 2017, told the Global Times that the project department hired a lot of Namibians, which was really helpful in lowering the unemployment rate.

Selma Joseph, a cleaner from Namibia who worked for the project from May 2015, said that she is proud and excited to work with Chinese who are intelligent and talented.

"They treat people as equals," Selma said, adding, "To tell the truth, Chinese build this port with love."

As a Namibian, Selma says she is grateful that China Harbour built such a great port on Walvis Bay, which has elevated her country to a higher level in the world.

The Walvis Bay port is not only a core logistics hub for Namibia, but also an important port in southwest Africa, serving landlocked countries such as Botswana, Zambia and Zimbabwe.

Through the construction of the project, the annual throughput of the container terminal at the port will be increased from 300,000 TEU to 750,000 TEU, and the handling efficiency will be improved qualitatively, according to China Harbour.

The oil storage facilities will also be the first national strategic reserve facility owned by the Namibian government, with the reserve period increasing from 15 days to 30 days.

Feng said that in the context of economic globalization, governments of various countries are also paying more attention to the development of their small and medium-sized enterprises. Localization and internationalization are the general trend, or we will be eliminated by the market, he added.

Especially under the Belt and Road Initiative, it is inevitable that Chinese enterprises will follow the trend of sustainable development, allocate resources that are more conducive to overseas operation and project management, help African countries solve economic development problems, fulfill corporate responsibilities, and position themselves as local enterprises, he said.