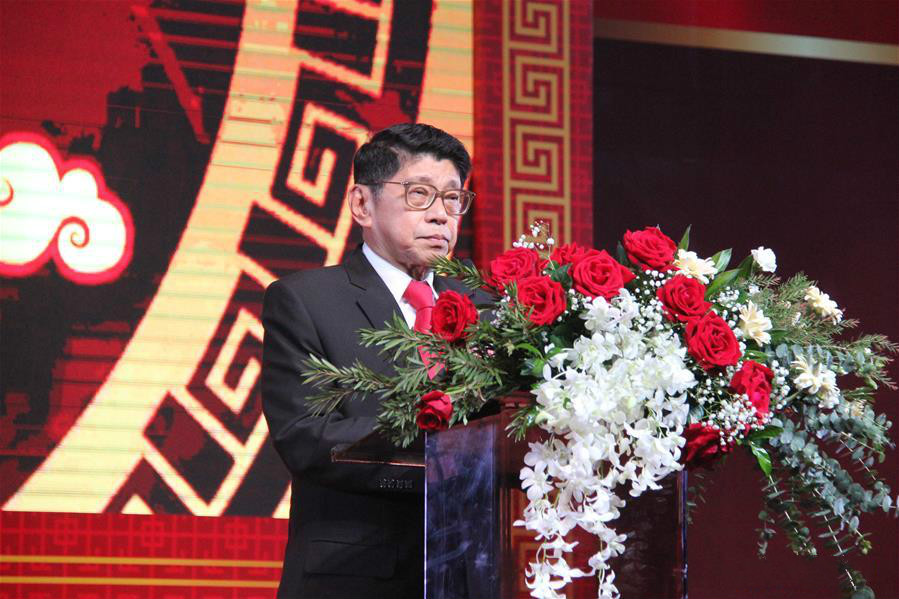 HAT YAI, Thailand, Sept. 27 (Xinhua) -- China has made great progress in the past 70 years since the founding of the People's Republic of China (PRC) and stands as a good example for many countries to follow, said Thai Deputy Prime Minister Wissanu Krea-ngam.

In a speech delivered at an event marking the 70th anniversary of the PRC held last Friday in Thailand's southern Songkhla Province, Wissanu spoke highly of China's development over the past 70 years and the China-proposed Belt and Road Initiative (BRI), and expressed his wish for a long-lasting Thailand-China friendship.

"I want to congratulate the Chinese government and Chinese people for developing from an impoverished country to now, a good example for many countries around the world in terms of political, economic and social development," Wissanu told Chinese media after the event.

"I was born in Songkhla province," he said, adding that he is of Chinese origin and that the grandparents of many Thais are from China.

He said that as a descendant of Chinese, he feels happy about China's achievements over the past seven decades.

Regarding Thailand-China relations, Wissanu said the two countries are related by blood, and are true "brothers and sisters."

The path China has taken is not a smooth one. Yet the country has made great accomplishments in such fields as science and technology, arts and culture, education, medicine and social welfare, he said.

Wissanu said he first visited China about 40 years ago and found something new every time he travelled to the country afterwards.

"The most obvious changes were new roads, (and) newly-built buildings in cities," he said, adding that the service sector has also boomed.

The deputy prime minister said the Chinese way of development is worth detailed study.

He attributed China's rapid growth to the vision of China's leaders and the policy continuity they have maintained, saying that the Chinese government, by implementing a series of policies, has kept the vast country unified and prosperous, which is not easy to achieve.

Commenting on the BRI, he said Thailand could benefit from the initiative as it boosts business, investment and cultural exchanges between the two countries.