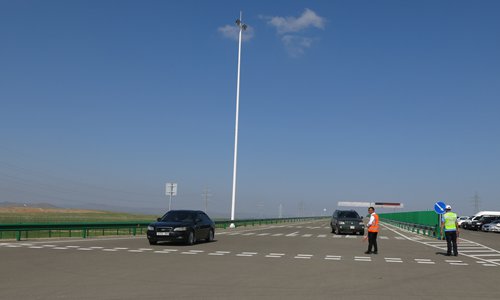 On July 7, police direct cars on the first ever expressway in Ulan Bator, Mongolia, which is built by China Tiesiju Civil Engineering Group. (Photo: Global Times)

"The airport expressway shows that 'Chinese standards' and 'Chinese technology' can be successfully exported from the country," Chinese Ambassador to Mongolia Xing Haiming, told the Global Times on July 5 at the ceremony.
"This is a symbolic project between China and Mongolia as part of China's Belt and Road Initiative, and also a 'friendship project' between China and Mongolia on the 70th anniversary of the establishment of diplomatic ties between the two countries," Xing said.
He noted the airport expressway is beneficial for Mongolia's national image and will improve its logistics capability and passenger traffic.
It is notable that the airport expressway adopts the Chinese standard, which controls road roughness to 0.8 centimeters and lower. Yang explained that parts of the expressway even exceed this standard. By comparison, the roughness index of good roads in Mongolia is 2 centimeters, according to Yang.

He quoted a Mongolian official from the transport department to demonstrate the flatness of the road, saying, "The official told me he was sleeping all the way back to the city center as the road was so flat and smooth."

Since June 2016, roughly 50 workers from China Tiesiju Civil Engineering Group have come to Ulan Bator. The project also boosted local employment, hiring about 120 Mongolian workers.
Nyamdorj, a Mongolian measurement engineer from Badrakh-Oil LLC, a cooperative partner of the China-led project, was grateful for the expressway, saying that he learnt many things from the Chinese engineers and workers.
"I feel so pleased and honored to participate in this airport expressway project based on Chinese standards. The road built by the Chinese company is of high quality and I have learnt many new road-building techniques that I never knew before in my country," Nyamdorj told the Global Times on July 5.
The state-owned China Tiesiju Civil Engineering Group previously helped Mongolia build a road in 2005 and a development center for disabled children in early 2019.
Since China proposed the BRI, Mongolia has responded actively and supported it. The country took the initiative to make changes in its development plan and proposed the alignment of its Development Road Program with the BRI, Xing told the Global Times in an exclusive interview.
Mongolia has also established a BRI fast-pass channel at the Chinggis Khaan International Airport, as well as some ports and stations. People participating in the BRI projects with approved certificates can pass through the BRI channel.
In addition, Mongolia is giving important suggestions in order to support and implement the BRI projects, which also shows its positive attitude, according to Xing.