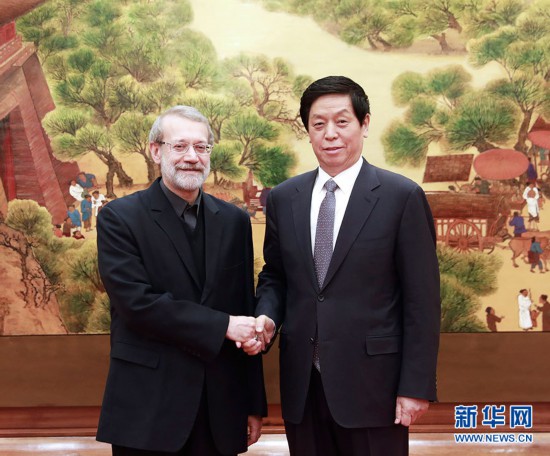 China's top legislator Li Zhanshu met with Iranian Parliament Speaker Ali Larijani in Beijing on Tuesday, and the two sides agreed to strengthen cooperation under the framework of the Belt and Road Initiative.

Li, chairman of the National People's Congress Standing Committee, said that China's position on maintaining the Joint Comprehensive Plan of Action has not changed, and the determination to develop China-Iran relations remains unchanged too.

Larijani echoed that Iran attaches great importance to and actively participates in the Belt and Road construction.

Wang said China expects Iran to play a more constructive role in regional affairs, adding that the two sides should work together to inject new impetus into developing a China-Iran comprehensive strategic partnership.

"The situation in the Middle East and the world is undergoing major changes, and relations between China and Iran are also facing a new situation."

"Both China and Iran are countries with thousands of years of civilization and tradition. In the face of the periodical changes consisting of certain individual events, the two countries can maintain strategic strength, while safeguarding and promoting ties with a long-term perspective, in efforts to continuously inject new content into bilateral ties," Wang added.

Iran greatly values its relationship with China and its participation in the Belt and Road Initiative, Zarif noted.

He said Iran invites China to play a more important role in issues like the reconstruction of Syria and Iraq, the Afghan peace process, and the Iran nuclear deal.

Zarif hoped the two sides can strengthen communication and coordination to protect the legitimate rights and implement the nuclear deal to safeguard multilateralism.

The two sides also exchanged views on the Joint Comprehensive Plan of Action, an international agreement on Iran's nuclear program reached in 2015, stating that they would continue to strengthen communication and coordination and make active efforts to safeguard legitimate rights and interests, implement the agreement and defend multilateral rules.