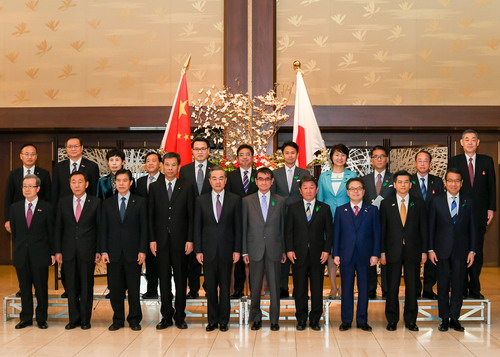 Wang said that the dialogue was restarted after an eight-year hiatus amid improvement in bilateral relationship.

Currently bilateral economic cooperation is at a new starting point, facing new historical conditions and macro environment, and the two sides should deepen communication from both strategic and pragmatic perspectives so as to boost mutual understanding, accumulate mutual trust, promote coordination and enhance cooperation, Wang said.

Wang pointed out that as this year marks the 40th anniversary of China's reform and opening-up, under the new circumstances, China is to launch a new journey of reform and opening-up in the new era and will seek development with higher quality, continue to expand opening up and improve business environment, and speed up the Belt and Road development.

He said that while economic and trade cooperation between China and Japan is faced with new historical opportunities, the two sides should cherish the momentum of improvement in bilateral ties which did not come by easily, safeguard the political foundation of bilateral relationship, stick to mutually beneficial and win-win results and joint development, and be dedicated to improving quality of and upgrading bilateral economic cooperation, particularly cooperation in areas such as energy-conservation and environment-protection, science and technology innovation, high-end manufacturing, finance and banking, sharing economy, medical care and elderly care industries.

The two sides should jointly push for outcomes of cooperation under the framework of the Belt and Road Initiative, and make them new highlights of bilateral cooperation; jointly promote the economic integration of East Asia, speed up negotiations on China-Japan-South Korea free trade agreement and the Regional Comprehensive Economic Partnership, and make continued efforts towards the goal of the Free Trade Area of the Asia-Pacific at an early date; jointly oppose trade protectionism, safeguard multilateral trade system, and promote development of an open world economy.

Kono said that economic cooperation is an important foundation and driving force for Japan-China relations.

He said that as this year marks the 40th anniversary of the signing of the Treaty of Peace and Friendship between Japan and China, bilateral relationship is faced with opportunities for improvement in all areas and stable development.

Facing new changes in economic situation of the two countries and the world, Japan is willing to work with China to plan and expand economic and trade cooperation from a new perspective, he said.

Japan attaches high importance to the important messages sent by Chinese President Xi Jinping at the opening ceremony of the Boao Forum for Asia Annual Conference 2018, and in face of rising protectionism, the free trade system centered on the World Trade Organization (WTO) should be safeguarded and trade issues should be handled based on WTO rules, he added.

During the dialogue, senior officials of foreign affairs, economic and finance ministries of both countries exchanged views and achieved a series of consensus on issues such as macroeconomic policies, bilateral economic cooperation and exchanges, cooperation with third parties, economic integration of East Asia, and multilateral cooperation.