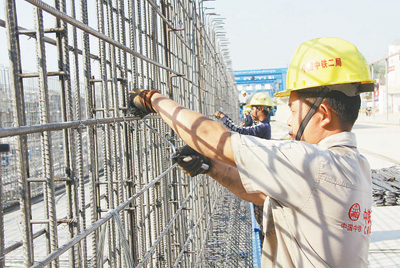 The China-Laos railway, which is expected to be completed in 2021, will turn Laos from a “land-locked” country to a “land-linked” one, and make it a land transportation hub within the Indochina Peninsula, Li Bingxuan, general manager of the Laos-China Railway Co., Ltd. (LCRC), told People’s Daily on Feb. 13.

Li said that 90 percent of the contracted projects will be finished this year.

Starting from the Mohan-Boten border gate, the China-Laos railway runs 40 kilometers south to Vientiane, the capital of Laos, a country of mountains and forests. Almost 63 percent of the route is comprised of bridges and tunnels.

The China-Laos railway has been China’s first overseas railway project to provide a direct link to China’s internal rail network since the Belt and Road Initiative was proposed. The 414-kilometer line is being built with Chinese technology and equipment to meet Chinese standards, with a design speed of 160 kilometers per hour. It’s scheduled to open in 2021.

The project has provided job opportunities for more than 32,000 local workers, according to current statistics. Over 4,300 members of the project team are from Laos.

In addition, the China-Laos railway will directly drive the development of building materials supply, power, logistics and other sectors in Laos after its completion.

Lao President Bounnhang Vorachit said that the railway project indicates the fruitful results of cooperation between Laos and China, and will upgrade the infrastructure in Laos and further promote the people-to-people connectivity between the two countries.

Local residents along the railway have started opening restaurants and hotels, while some investors came and planned to build factories here, according to a village head.

The China-Laos economic corridor, which is based on the China-Laos railway, has far-reaching significance for the economic and social development of Laos and the construction of a community with a shared future, said the Director of the Research Center on China at the National University of Laos.