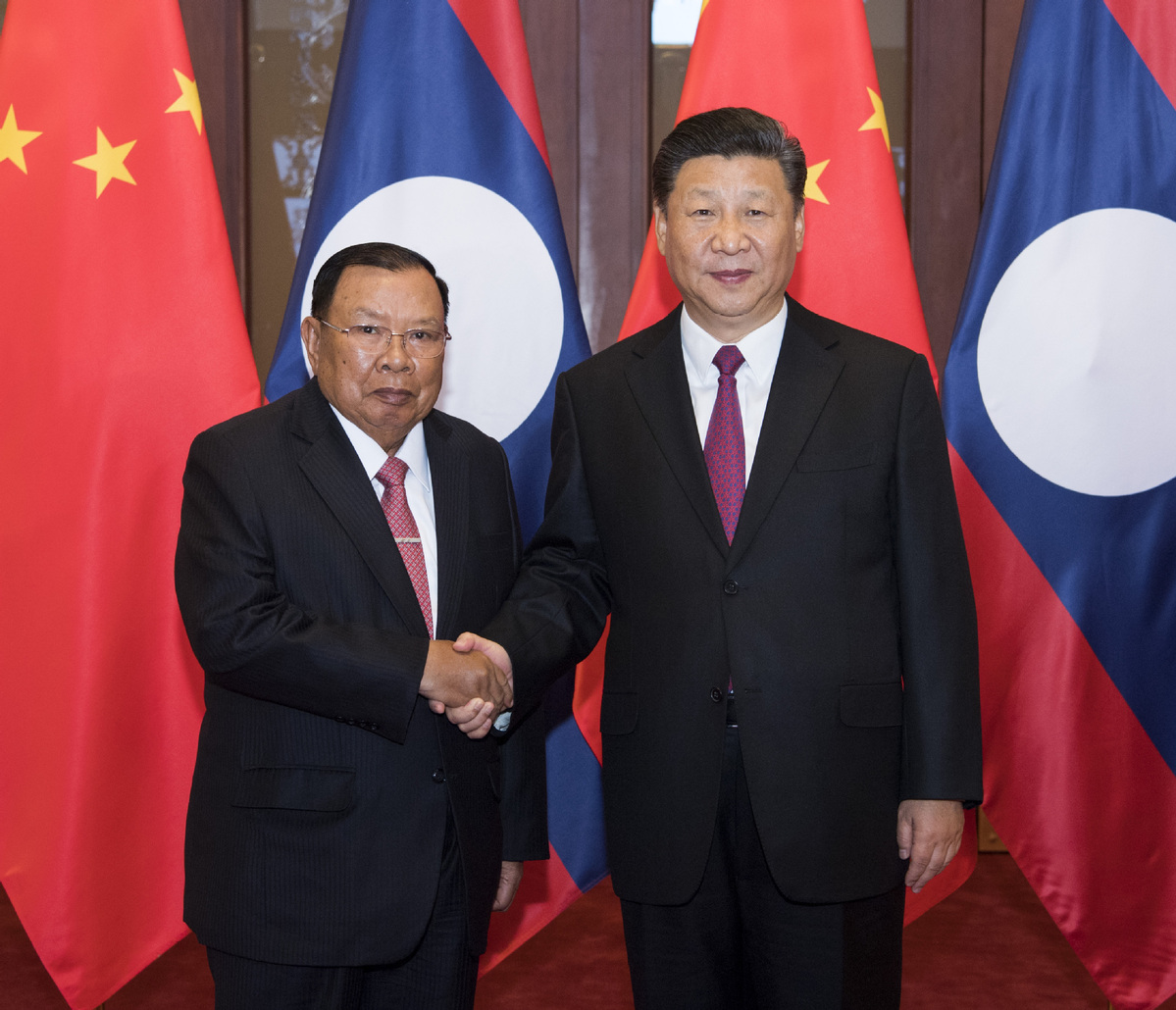 China and Laos on Wednesday agreed to advance the building of a community of shared future to achieve new outcomes.

Xi recalled his meetings with Bounnhang in the past few years, saying that many consensuses reached between the two sides are being implemented actively and effectively, bringing tangible benefits to both peoples.

Xi said the two sides have reached important consensus on building a community of shared future with strategic importance, which has played a leading role in the development of relations between the two parties and two countries.

Noting that bilateral relations are at their historical best and stepping into new development stage, Xi urged both sides to concentrate on the building of China-Laos community of shared future and promote its transformation from concept to action, from vision to reality.

He suggested that both sides strengthen strategic communication and consolidate the political foundation of China-Laos community of shared future.

The two sides should carry out comprehensive, multi-level and institutional dialogues and exchanges and raise the level of mutual trust, Xi said.

He called on both sides to deepen pragmatic cooperation and tighten the bonds of China-Laos community of shared future.

The two sides should make great efforts to promote cooperation in major projects under the framework of the Belt and Road Initiative, improve people's livelihood and strengthen cooperation in poverty alleviation, and work together to form a new pattern of China-Laos cooperation, Xi added.

The two sides should strengthen coordination and cooperation in multilateral mechanisms such as the United Nations, East Asian cooperation and the Lancang-Mekong cooperation, and effectively safeguard the common interests of both countries, he said.

He hoped that the two sides can actively engage in cultural and people-to-people exchanges to consolidate the public foundation of China-Laos community of shared future.

The two sides should strengthen exchanges and mutual learning in ecological and environmental protection and explore new ways to build a green community, he said.

Calling Xi "a reliable and close friend of the LPRP, the Lao government and the people," Bounnhang said that the various consensuses reached during Xi's visit to Laos last year are being implemented comprehensively, which has guided bilateral ties to a new height.

"I completely agree with Xi's idea on advancing the building of Laos-China community of shared future," Bounnhang said,  pledging to maintain regular high-level exchanges between the two parties, and strengthen exchanges of experience in party building and state governance.

He also vowed to beef up pragmatic cooperation between the governments in all areas, speed up big-project cooperation under the framework of the Belt and Road Initiative, and strengthen coordination in international and regional affairs, so as to build an unbreakable socialist community of shared future and benefit the two countries and people in the region.

Xi expressed his congratulations to Bounnhang on the new achievements made by the Lao people under the leadership of the LPRP and introduced to him the achievements and experiences of China's reform and opening-up, stressing that China will take more active actions to promote a higher level of opening-up to the outside world and make greater contributions to the prosperity and development of Asia and the world.

China has been continuously scoring new achievements in economic development, social harmony, reform and opening-up as well as building a moderately prosperous society in all respects, under the guidance of the Communist Party of China Central Committee with Comrade Xi Jinping at the core, Bounnhang said.

Hailing China's important role in international and regional affairs, and prominent contribution to peace and development of Northeast Asia and the world, Bounnhang expressed gratitude to Xi for China's long-standing support and help to Laos.

After the talks, the two heads of state attended the signing ceremony of a number of cooperation documents.