SHANGHAI, July 2 (Xinhua) -- Chinese mobile operators are leading the world in the deployment of transformative Internet of Things (IoT) solutions, according to the Global System for Mobile Communications Alliance (GSMA).

The GSMA said China is the world's largest IoT market with some 960 million devices connected via cellular networks, accounting for 64 percent of global cellular connections.

"Backed by the government, China is now at the forefront of the development and deployment of IoT solutions based on mobile IoT technology," said Alex Sinclair, chief technology officer of GSMA.

China is realizing the value of the IoT and transforming the society through the deployment of smart home, smart industry and smart city solutions. Some Chinese companies have showcased a wide variety of different examples of large-scale deployment of IoT at the just-concluded Mobile World Congress 2019 in Shanghai. 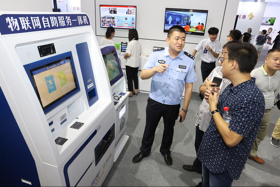 Sunsea AIoT has partnered China Telecom to install over 500,000 NarrowBand-IoT sensors in the Jing'an District in Shanghai, turning the area into a truly smart community. The devices are used to monitor from manhole covers, gas and smoke detectors to other environmental monitors.

China Mobile has also set up more than 100,000 NarrowBand-IoT intelligent fire alarm systems including fire alarms, temperature sensors, smoke and gas detectors across the country. The solution can monitor the temperature, smoke and flammable gas, and state of the equipment such as battery life and malfunctions, to ensure the safety of consumers in case of a fire. The fire protection platform is used to manage the deployment of equipment and firefighters, track their locations and send the information to relevant personnel in real time.

Working together with China Mobile, Ericsson Nanjing Panda Smart Factory has developed several use cases including a wireless Andon system. The system provides immediate communication directly to the appropriate engineer from the factory line, reducing lead times for problem-solving.

Pets can benefit from IoT technologies. Pet trackers developed by Oviphone Technology allow owners to check the locations of their dogs or cats anywhere and anytime, sending alerts when the animals leave a pre-set area.

"These new technologies are being implemented in different vertical fields and will fundamentally change the way we live and work. By delivering real-time information, they are making our cities smarter and our lives more convenient and efficient," said Alex Sinclair.