Mahathir Mohamad, who was elected Prime Minister of Malaysia at the age of 92, has ended his first trip to China after taking office again. Since he led the opposition coalition to election victory, many foreign media outlets have suggested Mahathir's new Malaysian government would make major changes on its policies concerning China, with some directly defining his policy direction as "anti-China." Unexpectedly to some, Mahathir had chosen to pay a visit to China not long after his inauguration, showing that he knows it would be an absolutely unwise move to break with China. 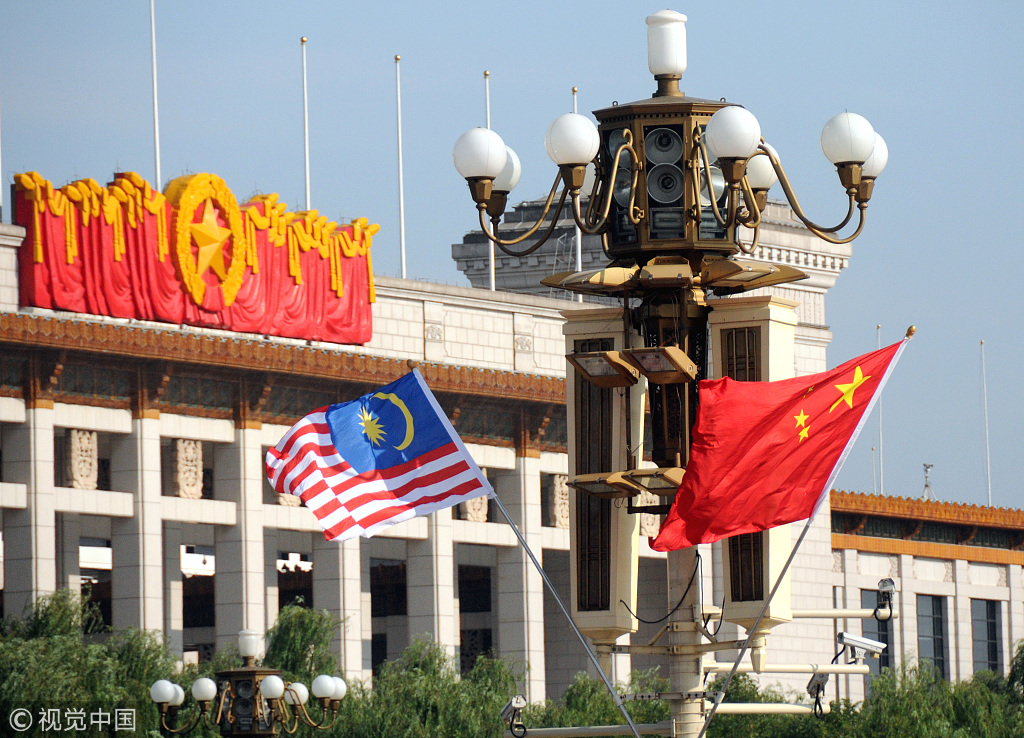 Chinese and Malaysian national flags flutter on a lamppost in front of the Tian'anmen Rostrum during the visit of Malaysian Prime Minister Mahathir bin Mohamad in Beijing on August 19, 2018. (Photo: VCG)

When meeting with Mahathir Mohamad, Chinese President Xi Jinping expressed appreciation that the new Malaysian government and Mahathir personally attach importance to bilateral  relations and that Mahathir repeatedly said he regards China as an opportunity for development and supports the "Belt and Road Initiative." Xi Jinping added that Mahathir has made an important contribution to promoting regional cooperation in Asia. This shows Beijing thinks highly of Mahathir, who is a known promoter of the Sino-Malaysian relationship and an experienced statesman.

Mahathir is on record saying his visit to China was meant to show the Chinese government and the Chinese people that Malaysia's policy of friendship with China will not change. He says Malaysia admires China's miraculous independent development and praises China's great achievements in industry and commerce. The Malaysian prime minister has suggested Malaysia's Look East policy will learn from the successful experience of China's development, and says his government welcomes Chinese companies to invest in Malaysia. He also says Malaysia supports and is willing to actively participate in the construction of "Belt and Road," which he says will be conducive to regional development and prosperity.

A recent report by Nomura Securities of Japan shows that Malaysia is one of four Asian economies that have benefited the most from "Belt and Road" construction, attracting more than 34.2 billion US dollars in investment, which is equivalent to about 10 percent of the country's GDP. It's been suggested that under the framework of the "Belt and Road," China-Malaysia pragmatic cooperation is now on a new journey, with challenges and opportunities coexisting.

At present, the biggest challenge for the new Malaysian government is that it faces enormous financial pressure. After the new government took office, it was verified that the national debt has reached 251 billion US dollars, equivalent to 80.3 percent of its national GDP. The country's foreign exchange reserves did not return to over 100 billion US dollars until July 31st this year.  Since Malaysia's foreign exchange reserves are the lowest in Asia and its debt is high, if Malaysia sees large-scale capital outflows or a plummet in its exchange rate, this could easily trigger a financial crisis. International credit rating agency Moody's suggests Malaysia needs to maintain about 120 billion US dollars in foreign exchange reserves to effectively resist systemic risk. Therefore, it is reasonable for the Mahathir government to cancel a number of expensive projects to reduce its external debts.

Despite the challenges, China and Malaysia are facing more opportunities to promote pragmatic cooperation in the new era. The biggest opportunity is that the new Malaysian government has a positive attitude and a willingness to participate in the Belt and Road Initiative. China has been Malaysia's largest trading partner for nine consecutive years, and Malaysia is China's largest source of imports from the ASEAN region. For the second year in a row, China has become the largest source of investment in Malaysia's manufacturing industry. Chinese companies have invested in more than 380 projects in Malaysia, creating more than 60,000 jobs in the country. In addition, China has been one of the largest sources of foreign tourists in Malaysia for six consecutive years. There are a large number of ethnic Chinese in Malaysia, playing an important role in both political and business circles. Chinese culture and Chinese education are preserved intact the most in Malaysia as compared to other Southeast Asian countries. This puts Malaysia in a unique advantage when it comes to cooperation with China.

The Mahathir government is calling on foreign companies to invest directly in Malaysia to build factories, bring new technology and jobs to Malaysia, and make Malaysia a manufacturing powerhouse like China, instead of merely becoming a consumer market. This is evident from what his schedule entailed in China.

In Hangzhou, the first stop on his trip to China, Mahathir visited the headquarters of Alibaba.  He said Alibaba knows the power of technology very well and knows how to use technology. Mahathir added that the company has applied technology to many fields and solved many problems and a lot of pain points faced by human beings. He said this is especially great and thought Malaysia could also benefit from it. At the Geely Group, Mahathir personally test-drove a new Geely car and investigated how Geely and Malaysian car brand "Proton" are cooperating in the field of new energy. He also visited Chinese drone manufacturer Da Jiang Innovations (DJI).

All this suggests that areas such as e-commerce, new energy vehicles and drones have become the focus of the leader's intention to reshape the Malaysian economy. Undoubtedly, this will include pragmatic cooperation under the framework of "Belt and Road Initiative" when it comes to China-Malaysia cooperation. Under the personal guidance of the leaders of the two countries, China and Malaysia will certainly be able to cultivate new cooperation, as well as continue to increase their mutually beneficial ties for long-term results.