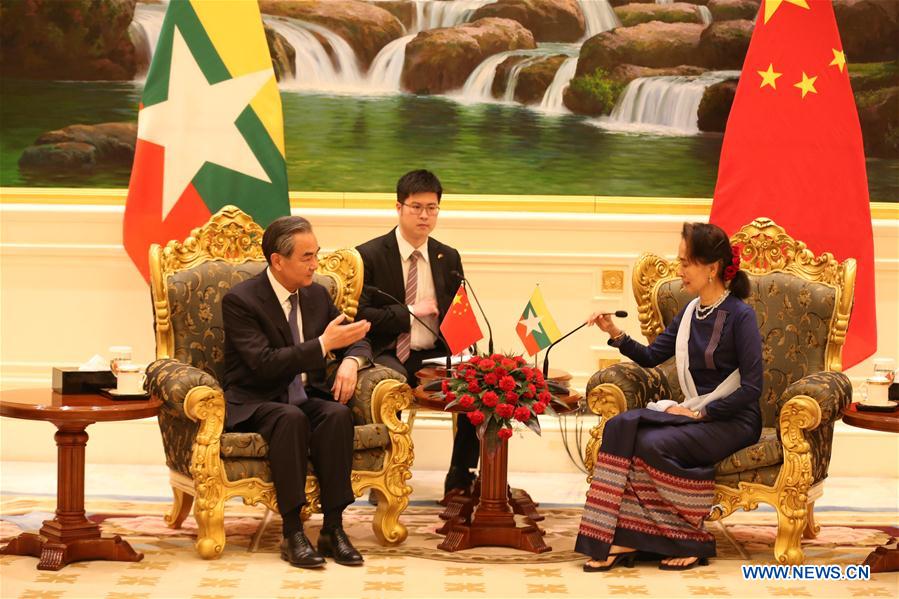 Wang said in light of the 70th anniversary of the establishment of their diplomatic relations next year, China and Myanmar should hold a series of celebrations, plan and prepare for high-level exchanges, comprehensively push forward cooperation in areas including economy, trade, people-to-people and cultural exchanges.

Wang said China is willing to promote China-Myanmar Economic Corridor from concept and plan into substantial implementation and build it into a flagship program of joint construction of the Belt and Road between the two countries.

Wang said China's development will bring opportunities to the world, especially neighboring countries and China will stand firm with people of Myanmar during the future development process of the country.

Suu Kyi appreciated support extended by China on safeguarding national sovereignty, opposing foreign interference, promoting social and economic development of Myanmar, adding that Myanmar is willing to strengthen communication with China on international and regional issues and jointly uphold the purpose and principles of the UN Charter.

She said the two sides will seize the 70th anniversary of the establishment of their diplomatic relations as an opportunity to strengthen high-level exchanges, jointly build the Belt and Road as well as China-Myanmar Economic Corridor.

Wang also met with U Kyaw Tint Swe, minister of the State Counsellor's Office, U Thuang Tun, minister of Investment and Foreign Economic Relations, U Han Zaw, minister for Construction, U Kyaw Tin, minister for International Cooperation, and attended the signing ceremony of a cooperation agreement on the same day.