China never impose on others or attach any unacceptable conditions in BRI cooperation: FM spokesperson

China never impose on others or attach any unacceptable conditions in pursuing cooperation under the Belt and Road Initiative, Chinese Foreign Ministry spokesperson Hua Chunying said on Tuesday. 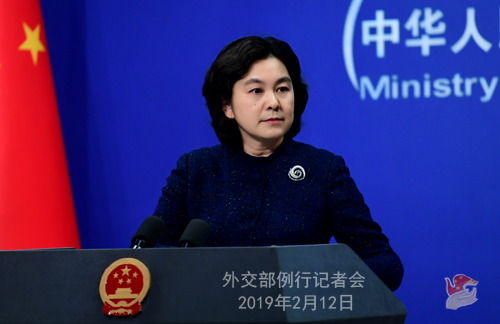 The Hindustan Times, in an article published on 4 February 2019, claimed that it accessed a report by the Ministry of External Affairs which pointed out that Pakistan withdrew from the Diamer-Bhasha dam project because of unacceptable conditions of ownership and finance that were imposed by China, adding that projects in Nepal and Bangladesh were also facing stiff opposition.

Hua Chunying rejected the report, claiming that the details of the particular projects cited in the report were "far from the fact."

She explained that for example, the dam project was not included in the list of China-Pakistan Economic Corridor (CPEC) projects and the hydropower project in Nepal was still in the negotiation stage. As for the blacklisting of China Harbour Company by the Bangladeshi government was concerned, it was also not true, she added.

Hua mentioned that more than 150 countries and international organisations have signed Belt and Road cooperation documents with China.

"We never impose on others or attach any unacceptable conditions. Each and every project is the result of equal consultations. A particular project or two might encounter difficulties or problems, but that does not change the fact that Belt and Road cooperation has contributed to participating countries' economic and social development and has won wide support," Hua Chunying added.