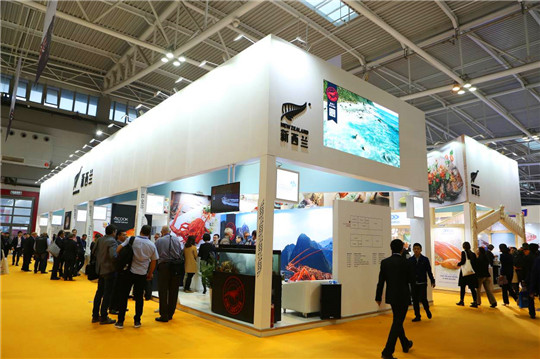 New Zealand's pure and high-quality seafood products are showcased at the 22nd China Fisheries and Seafood Expo (CFSE) held in the eastern coastal city of Qingdao from Nov 1 to 3, 2017. [Photo provided to chinadaily.com.cn]

Wang called for both sides to advance negotiations on an upgraded bilateral free trade agreement to fully realize potential in trade cooperation during a meeting with Winston Peters, deputy prime minister and foreign minister of New Zealand.

Bilateral cooperation between the two countries has created many "firsts" among relations of China and Western developed countries and plays an exemplary role, Wang said.

New Zealand was the first Western developed country to recognize China's full market economy status and to sign a bilateral free trade agreement with China in 2008.

China and New Zealand signed a cooperation agreement on the Belt and Road Initiative during Premier Li Keqiang's visit to the country last year, making it the first developed country to sign such an agreement with China.

He also noted that both countries should expand exchanges and cooperation in education, science and technology, culture, tourism, and judicial enforcement.

Peters said that relations with China are always the priority of New Zealand diplomacy and it would like to enhance exchanges and expand bilateral cooperation.

New Zealand will participate in the first China International Import Expo to be held November in Shanghai, he said.

According to the website of the Foreign Ministry, the value of bilateral trade between China and New Zealand reached $14.48 billion last year. China is New Zealand's largest trading partner, export destination and source of imports.