MANILA, Nov. 21 (Xinhua) -- China and the Philippines issued a joint statement Wednesday, stipulating cooperation on the Belt and Road construction and agreeing to discuss maritime cooperation during President Xi Jinping's state visit to the country. 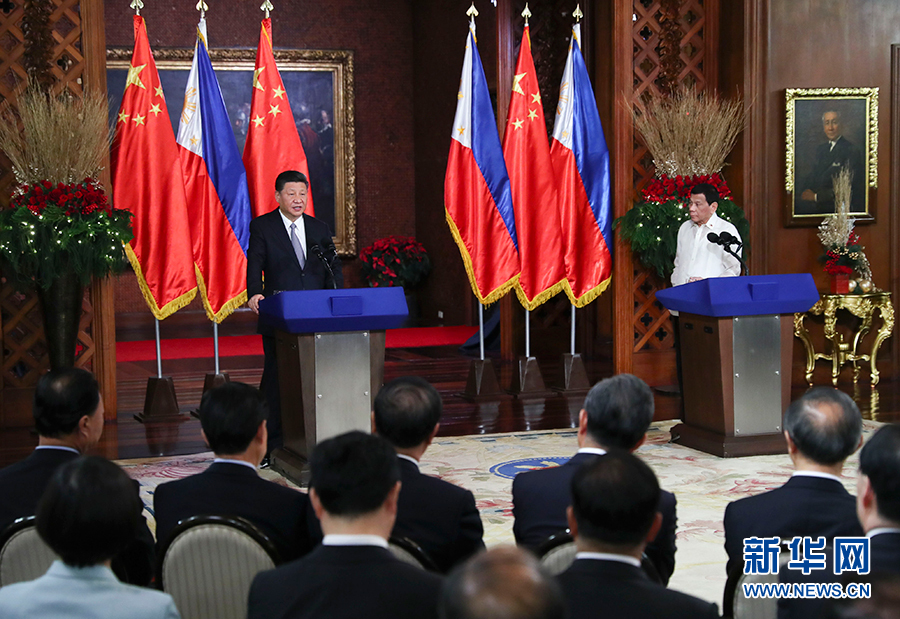 During their meeting, Xi and his Philippine counterpart, Rodrigo Duterte, charted the course for the future of China-Philippines bilateral relations, had in-depth exchange of views on regional and international issues of common interest, and reached important consensus, according to the statement.

China and the Philippines, according to the document, recognized that the bilateral relations have achieved a positive turnaround and a sound momentum of development through the joint efforts and mutual trust of both sides.

The two presidents decided to establish the relationship of comprehensive strategic cooperation on the basis of mutual respect, sincerity, equality, mutual benefit and win-win cooperation.

The two leaders recognized that the elevation of China-Philippines relations to higher levels is in line with the fundamental interests and shared aspiration of the two countries and peoples, the statement said.

They agreed to maintain close high-level communication so as to strengthen the planning of bilateral relations, institute timely communication on major regional and international issues, and promote the sharing of experience in state governance.

The Chinese and Philippine sides welcomed the signing of the Memorandum of Understanding (MoU) on Cooperation on the Belt and Road Initiative, according to the document.

Both sides hailed the progress in bilateral trade and economic cooperation and recognized that infrastructure cooperation has been a highlight of China-Philippines bilateral cooperation.

China expressed its commitment to import more high-quality agricultural products including tropical fruits from the Philippines through expeditious completion of the accreditation process to enhance two-way trade balance.

The two sides will speed up the implementation of the China-Philippines Industrial Park Development Program, which was signed during this visit, and will continue to provide an enabling environment for their enterprises to invest in each other's country.

China reiterated its firm support to the Philippine government's efforts in fighting against illicit drugs and drug-related crimes, and expressed willingness to strengthen cooperation in areas including combating the smuggling of illegal drugs and their precursor chemicals, intelligence sharing, joint investigation and operation as well as drug rehabilitation, according to the statement.

The document also stipulated cooperation between China and the Philippines in other areas including defense, health, counter-terrorism, science and technology, tourism and education.

According to the document, China and the Philippines welcomed the signing of the MoU on Cooperation on Oil and Gas Development between the two governments, and agreed to discuss maritime cooperation including maritime oil and gas exploration, sustainable use of mineral, energy and other marine resources.

They also agreed to strengthen existing cooperation mechanisms in other maritime-related areas, the document added.

Besides, the document reads, both sides exchanged views on issues regarding the South China Sea, noting that the situation has become generally more stable as a result of joint cooperative efforts between China, the Philippines, and other Association of Southeast Asian Nations (ASEAN) member states.

Both sides, together with ASEAN member states, will work for the full and effective implementation of the Declaration on the Conduct of Parties in the South China Sea (DOC) in its entirety.

Both sides agreed to maintain the positive momentum of the negotiations on the Single Draft Code of Conduct (COC) Negotiating Text, with a view towards the early adoption of an effective COC, based on consensus.

Meanwhile, China supports the Philippines as the Country Coordinator of the China-ASEAN Dialogue Relations and the coordinator for cooperation between China and Brunei Darussalam-Indonesia-Malaysia-Philippines East ASEAN Growth Area (BIMP-EAGA).

The two sides agreed that the milestone visit of President Xi has contributed to the advancement of friendship and cooperation between China and the Philippines.

Xi extended an invitation to Duterte to attend the second Belt and Road Forum for International Cooperation to be held in Beijing, China in April 2019. Duterte accepted the invitation with pleasure, according to the statement.

Xi's two-day visit ending Wednesday has been the first one by a Chinese head of state to the Philippines in 13 years.