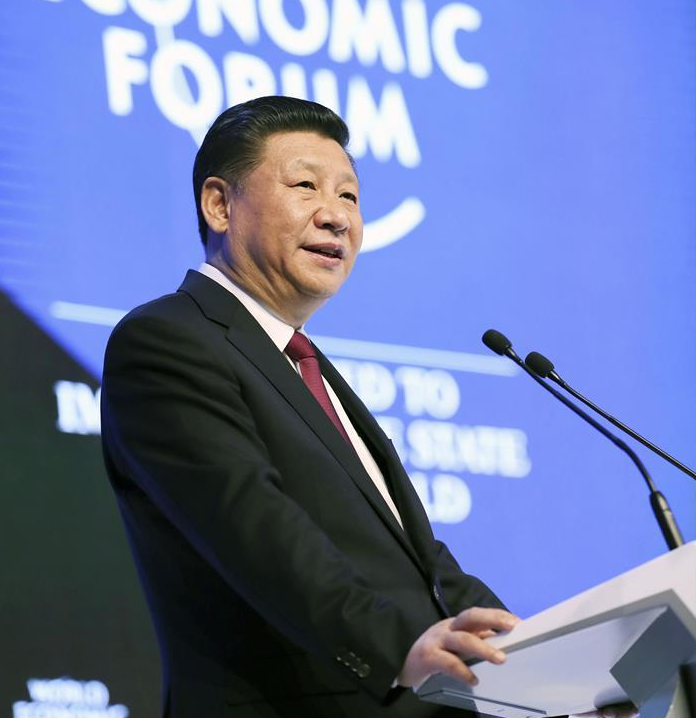 Chinese President Xi Jinping delivers a keynote speech at the opening of the 2017 annual meeting of the World Economic Forum (WEF) in Davos, Switzerland, Jan. 17, 2017. Since Chinese President Xi Jinping made landmark speeches at the WEF in Davos and at the UN Office at Geneva a year ago, the idea "to build a community with shared future for mankind" has gained wider international recognition for offering China's solutions to cope with global challenges. File Photo: Xinhua

As President Xi Jinping's concept of "building a community with a shared future for humanity" gains ground internationally, China will attach more importance to the five-year-old notion, with a view to finding an ultimate way to world peace.

At the beginning of March, China is entering its annual political high season. As the country's top legislature and advisory body gear up for their annual sessions to set the national agenda for the year and beyond, analysts expect the "shared future" concept to be a major theme during this year's meetings.

Analysts have suggested that building a community with a shared future for humanity could potentially be proposed to be added to the Constitution, at the two sessions.

A NOTION THAT MATTERS

Building a community with a shared future for humanity was first proposed to the world by Chinese President Xi Jinping in March 2013 during his visit to Moscow. In the following years, Xi continuously refined his vision of global governance.

A community with a shared future pursues an open, inclusive, clean, and beautiful world that enjoys lasting peace, universal security, and common prosperity.

According to the idea, countries should respect one another, discuss issues as equals, and resolutely reject the Cold War mentality and power politics. Countries should take a new approach to developing international relations with communication, rather than confrontation, and partnerships, rather than alliances.

"The notion has enriched the theoretical system of international relations and provided a new perspective -- a Chinese perspective -- on how countries get along with one another," said Ruan Zongze, executive vice president of the China Institute of International Studies.

In his report made at the 19th National Congress of the Communist Party of China (CPC) last October, Xi reiterated the concept and laid out a roadmap for China's foreign policy that connects the country's future to that of the whole world. The notion was thereafter written into the Party's Constitution as an integral aspect of Xi Jinping Thought on Socialism with Chinese Characteristics for a New Era.

"Building a new type of international relations" and building a community with a shared future for humanity are the overall goals of China's diplomacy, according to Wang Yi, Chinese foreign minister.

"The goals originate from 5,000 years of tradition that the Chinese nation sees the world as equally shared by all, from China's diplomatic values with peace at the core, and from the CPC world view that well-being of people from all countries is intertwined," Wang said.

This echoes the observation of late British historian Arnold Toynbee, who believed that the cosmopolitanism that the Chinese nation had cultivated in its long history was a "historic asset."

In January this year, the CPC Central Committee at a plenary session stressed that, "Following the path of peaceful development, pursuing a mutually beneficial strategy of opening up, and promoting the building of a community with a shared future for mankind are of great significance to the cause of peaceful development for humanity."

Key to this "shared future" is translating the vision into action.

During the past five years, China has been pursuing win-win cooperation with the world while following its own path of peaceful development.

The Belt and Road Initiative, as the epitome of the concept, has become a huge cooperation platform for countries concerned -- big or small, near or far -- to realize their common development.

Also proposed by Xi in 2013, the initiative comprises the Silk Road Economic Belt and the 21st-Century Maritime Silk Road and aims to build a trade, investment and infrastructure network connecting Asia with Europe and Africa along and beyond ancient Silk Road trade routes.

"The Belt and Road Initiative promotes the formation of a new global and economic order," said Wang Yiwei, director of the Institute of International Affairs at Renmin University, adding that the new global order was a community of shared future which embodies "China's view of power, stressing equality and fairness."

As a supporter of the Belt and Road Initiative, the China-initiated Asian Infrastructure Investment Bank has now expanded its membership to 84, representing a vote of confidence in the bank by the international community.

By hosting or participating in such international events as the G20, BRICS, APEC, and Boao Forum for Asia meetings as well as the World Economic Forum in Davos, China demonstrates a strong preference for an open world economy.

At the WEF meeting in 2017, Xi's vision of building a community with a shared future for humanity gained resonance worldwide. His speech garnered huge appreciation as he vehemently championed a world of free trade, an open economy and globalization, revealing China's multilateralist approach to invigorating global growth. The speech was still warmly discussed at this year's meeting.

"Our friends in Southeast Asia say that the lotus flowers grow taller as the water rises. Our friends in Africa say that if you want to go fast, walk alone; and if you want to go far, walk together. Our friends in Europe say that a single tree cannot block the chilly wind. And Chinese people say that when big rivers have water, the small ones are filled; and when small rivers have water, the big ones are filled," Xi said when addressing a forum three years ago. "All these sayings speak to one same truth, that is, only through win-win cooperation can we make big and sustainable achievements that are beneficial to all."

Over the past five years, from multilateral conferences to bilateral meetings with foreign leaders, from high-profile speeches to congratulatory letters, Xi has frequently emphasized his notion, which has augmented its visibility and influence at home and abroad.

Building a community with a shared future for humanity is, in essence, a way to connect the prospects and destinies of every nation and country closely together, share weal and woe, and turn planet Earth into a harmonious family.

In the past five years, Xi's visits to 57 countries and major international and regional organizations have covered five continents. With friendly cooperation between China and other countries continuously expanding, the idea is indeed gaining support and endorsement from an increasing number of people worldwide.

It has been not only incorporated into a UN resolution at the 55th UN Commission for Social Development, but also enshrined by the UN Security Council, the Human Rights Council and the First Committee of the UN General Assembly.

When delivering a speech focused on building a community with a shared future at the general debate of the 70th session of the UN General Assembly in New York in 2015, Xi received a remarkable 15 rounds of applause in just 20 minutes.

No matter what stage of development it reaches, China will never seek hegemony or engage in expansion. The country will neither import foreign models of development nor export the Chinese model, according to him.

As this year's "two sessions" are about to start, at which the country's development and diplomatic policies will be better elaborated, China will define its role on the world stage more clearly.