China on Monday released a grand plan for the development of the Guangdong-Hong Kong-Macao Greater Bay Area, aiming to build a global economic and technological powerhouse in the country's south region that could be on par with bay areas in New York and San Francisco. 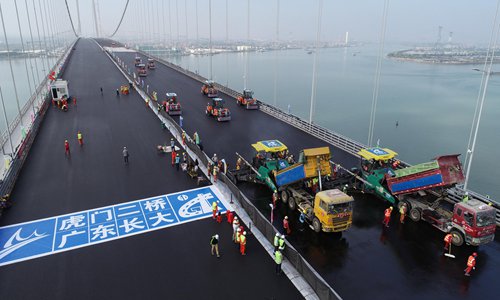 Construction workers work on the Humen Bridge II on January 30. The bridge would connect Guangdong, Hong Kong and Macao once completed. Photo: VCG

The Greater Bay Area, which spans nine cities in South China's Guangdong Province as well as Hong Kong and Macao, the two special administrative regions, with a total GDP of $1.5 trillion in 2017, will become a new frontier for China's fresh round of reform and opening-up, experts said.

Chen Xinxin, a research fellow at the Institute of Law of the Chinese Academy of Social Sciences, told the Global Times on Monday that the development timetable for the area as shown in the guideline, an important outline document guiding the current and future cooperation and development of the Greater Bay Area, is in line with the nation's economic and technological development.

"It is not merely for the Pearl River Delta Area but also integrated with China's overall development plan," said Chen.

The guideline covers the period from now to 2022 in the near term and extends to 2035 in the long term. By 2022, a first-class international bay area with urban clusters should be basically established, featuring outstanding innovation ability and beautiful environments. By 2035, high-level interconnectivity in the markets in the Greater Bay Area should be realized with synergized regional development.

The grand plan calls for measures to strengthen cooperation in innovation and technology, enhance the building of basic innovation capacity, improved the in-depth integration of industries, academia and research, and deepen reform of innovation systems and mechanisms in the region, as well as step up the protection and exploitation of intellectual property rights.

Chen said the Greater Bay Area will play a significant role in the country's further reform and opening-up under the "one country, two systems" principle.

"The principle should be continuously upheld as it is important to maintain (each region's own advantages)," said Chen.

According to the guideline, such new-generation high technologies in information, biology, advanced manufacturing and new materials will grow into core industries in the area. Several key projects in fifth-generation (5G) networks, genetic testing, intelligent robotics, 3D printing and the BeiDou navigation system will be cultivated.

Whether the Greater Bay Area can become an international technology and innovation hub is the key to the area's success, according to a research report recently issued by the China Silk Road iValley Research Institute.

The region boasts the most complete manufacturing industry chain and has world-class technology talent from prestigious universities. Moreover, the favorable location offers convenience and benefits to enhance technological and innovation exchanges and cooperation with countries and regions along the routes of the Belt and Road Initiative and other major countries in the world, said the research report.

By comparing the Greater Bay Area with the New York bay area and San Francisco Bay Area in the US, Liang Haiming, chairman of the institute, told the Global Times on Monday that balancing the interests of traditional and emerging industries, and helping multiple industries share the work while cooperating are two things that could be learned from the two US bay areas.

Liang added that the Greater Bay Area is just at the first step, while the two American bay areas have grown up and achieved success.

However, it is not practical to fully imitate the bay area construction in developed countries, even though the San Francisco Bay Area has many similarities with the area in China.

The Chinese area "has so such diversity with two systems, three customs areas and three currencies," Chen said. "China will explore its own development path based on innovation."