China responds to US new aid offer to Indo-Pacific region 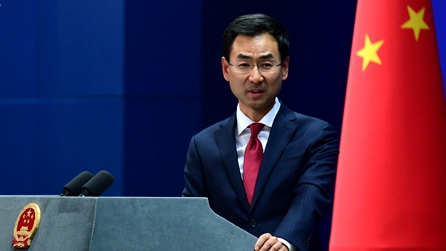 "The international community will certainly be concerned about how the US will deliver on its promises," Chinese Foreign Ministry spokesperson Geng Shuang said on Monday in response to US Vice President Mike Pence's offer of 60 billion US dollars in aid to the Indo-Pacific region.

Speaking at the Asia-Pacific Economic Cooperation (APEC) CEO Summit on Saturday, Pence said the US had a "principled approach" to financing infrastructure projects in the Indo-Pacific region. "We don't drown our partners in a sea of debt," he said. "We don't coerce or compromise your independence. We do not offer a constricting belt or a one-way road."

Pence did not mention China by name in his speech but analysts claimed that his words were meant as a swipe at China's proposed Belt and Road Initiative (BRI), and highlighted the deepening competition between both powers for regional influence.

There is no need to assume Pence's speech was about China, Geng said, noting "since the US side has mentioned 'belt' and 'road,' then I might as well respond to a few words."

The BRI is an economic cooperation initiative and an international public good provided by China, the spokesman said, stressing the initiative is based on mutual respect and win-win cooperation in accordance with market and commercial principles.

"If there are restrictions, there will not be so many joint projects. If it is a one-way benefit, there will be no more than 140 countries and international organizations signing agreements with China," Geng said.

The BRI is welcomed and supported by the international community, he said, citing statements by Pacific Island nations and the Philippine finance minister to prove the initiative is transparent and for mutual benefit.

"It is a good thing that the US made its commitment to provide 60 billion US dollars in infrastructure financing to boost regional development," he said. "The Chinese side welcomes it."

"Meanwhile, we have noticed that there are some discussions about whether the US can fulfill its promises," Geng added, urging the US to carry out its commitment.