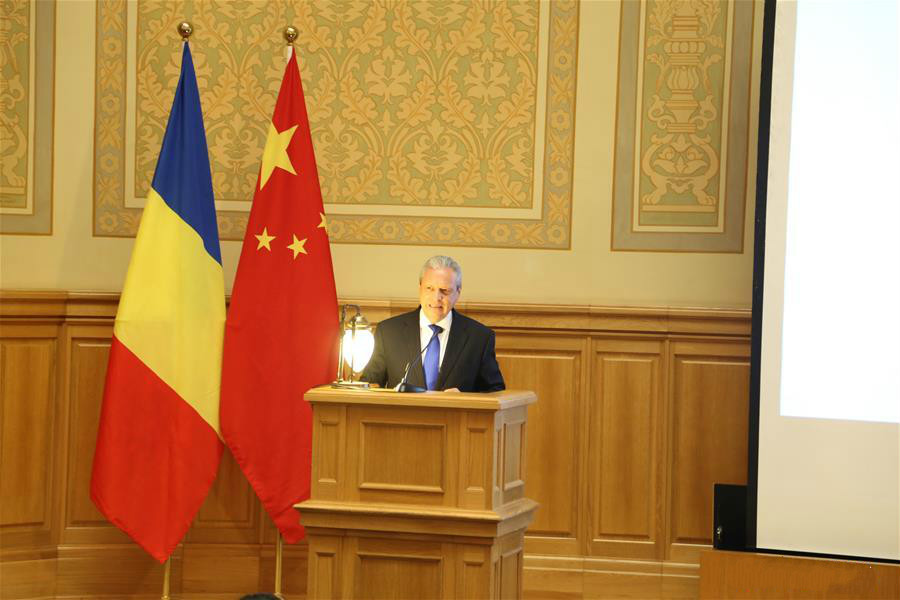 Viorel Isticioaia-Budura, special representative for Asian affairs of the Romanian Foreign Ministry speaks during a seminar on China-EU Relations and the 70th Anniversary of the Establishment of Diplomatic Relations between China and Romania, which jointly hosted by the Romanian Diplomatic Institute and the Chinese Embassy in Romania, Bucharest, capital of Romania, Oct. 8, 2019. (Photo: Xinhua)

BUCHAREST, Oct. 8 (Xinhua) -- The European Union (EU) and China should properly handle their differences and work together to address global challenges, said Viorel Isticioaia-Budura, special representative for Asian affairs of the Romanian Foreign Ministry on Tuesday.

He made this remark at the "Seminar on China-EU Relations and the 70th Anniversary of the Establishment of Diplomatic Relations between China and Romania" jointly hosted by the Romanian Foreign Ministry, the Romanian Diplomatic Institute and the Chinese Embassy in Romania.

On future EU-China relations, Isticioaia-Budura said that the two sides should innovate cooperation models, expand cooperation areas, and work together to create an open, fair and non-discriminatory environment to ensure the healthy and sustainable development of their ties.

Chinese Ambassador to Romania Jiang Yu said in her speech that China-Romania relations have made steady headway with fruitful results reaped from pragmatic cooperation over the past seven decades since the establishment of diplomatic relations.

"In an era of emerging risks and challenges, unilateralism and protectionism are posing a grave threat to the whole world," she continued, calling on both China and Romania to firmly support multilateralism, free trade and globalization, withstand external pressures, and ensure that their ties on the healthy track, meanwhile actively broaden the scope and diversifying the models of cooperation.

Speaking of China-EU relations, Jiang pointed out that the two sides are both important poles in the multi-polar world. It is important to view this relationship from a strategic and long-term perspective.

Chen Yuming, visiting vice president of China Public Diplomacy Association (CPDA), said that China and Romania have demonstrated a high degree of political wisdom, and have respected, supported and trusted each other since they established diplomatic relations seven decades ago.

Chen added that the two countries should firmly support each other on issues concerning each other's major interests and concerns.

Dan Petre, director of the Romanian Diplomatic Institute, said that the 70 years since the establishment of diplomatic ties between Romania and China are 70 years of sincere friendship, 70 years of common development, and 70 years of solid relations.

Highly appreciating the China-proposed Belt and Road Initiative, Petre believed that this initiative will offer historic development opportunities for countries in Europe and beyond, hoping that Romania, a country along the route, will fully seize this opportunity.

The seminar saw the participation of more than 150 people, including Romanian and Chinese diplomats, directors of several local think tanks, and a Chinese delegation of experts and scholars.