QUITO, April 8 (Xinhua) -- China-proposed Belt and Road Initiative (BRI) has offered an opportunity to develop Ecuador's infrastructure and achieve connectivity to enhance its trade, tourism and business ties with the rest of the world. 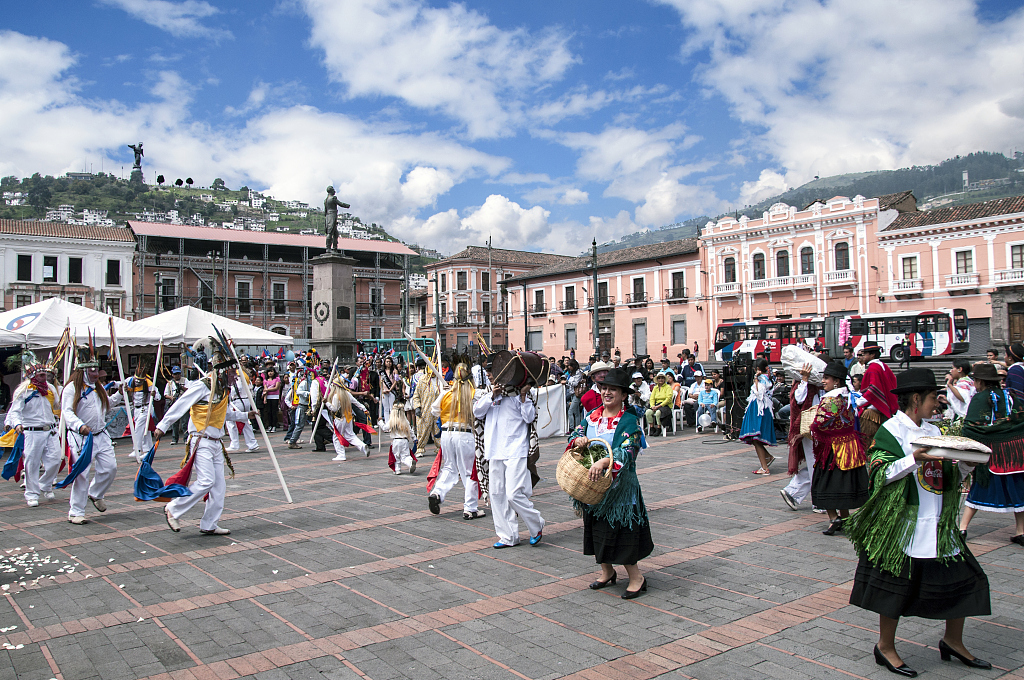 Chinese companies are currently working on projects along the country's northern Pacific coast, an area hard hit by a powerful earthquake on April 16, 2016.

Financial support from the Chinese government, along with the participation of Chinese consortium China Road and Bridge Corporation-China National Electronics Import & Export Corporation (CRBC-CEIEC), have helped launch large-scale infrastructure projects in the northern provinces of Manabi and Esmeraldas.

The projects include the reconstruction of the Eloy Alfaro International Airport in Manta, Manabi's second-largest city, and two bridges in the province. A fourth project centers on the Quininde-Las Golondrinas Highway that connects Esmeraldas with neighboring Imbabura province.

"China is a strategic partner, more than that, a great complement for our state," Luis Parrales, the consortium's supervisor overseeing the airport's reconstruction, told Xinhua.

"For us Ecuadorians, the arrival of Chinese companies contributing their technology has been a radical change for our country," said Parrales.

The consortium's input has made a great impact, as Ecuador in general, and Manta in particular, are very grateful, Parrales said, "because without these contributions, Manta's airport could not have been realized."

The airport's original control tower was toppled by the 7.8-magnitude quake, which left 673 people dead and more than 16,600 injured.

While the landing strip remained intact, the terminal and communications systems were severely damaged, leaving one of the leading centers of tourism and business on the coast temporarily cut off from the rest of the world.

A provisional airport with a control tower that is barely eight meters in height has served the area since 2016, with an obsolete and even manual communications system.

Construction is due to be completed by May 15, 2020, providing the region with a brand new and larger terminal equipped with high technology.

The 4,927-square-meter airport will boast a 36.6-meter-high control tower, taller than its predecessor, and will be able to accommodate Boeing 747-400 aircraft.

The larger airport will have the capacity to receive 115,000 passengers a year, compared to the current capacity for 50,000, and has generated 800 jobs, including 300 direct jobs for the local labor force.

"Manta is going to rise with this new airport," Parrales said during a tour of the site, adding that the airport would turn the city into a "new window unto the world."

Area residents are also looking forward to the new airport.

"As Manabi locals, we are very grateful," local citizen Cristina Macias told Xinhua. "What the Chinese government has done in supporting us so we are able to rise, or rise again, after that major blow, is wonderful."

"We have a great outlook for this airport. We have a lot of faith that it will help Manabi's economy," she said.

"We are going through hard times and thanks to the support we have from the Chinese government, we will be able to move forward," Macias added.

Ecuador's government sees the new airport as an axis of development and a gateway for thousands of business opportunities that will help spur the local economy and contribute to national progress.

Adriano Zambrano, administrator of the airport, believes Ecuador has two factors it should take advantage of: its ties with China and its geographic location.

"China is a strategic partner," said Zambrano. "Although we are a small economy, being in a strategic location in the westernmost part of South America and aligned with the Equator allows us to develop all connectivity."

"There's potential there to consolidate strategic cooperation for mutual benefit," he said, keeping in mind a proposal to link Latin America to the Asia-Pacific region via a route from Manta to Tahiti, in French Polynesia.

"That seeks to make Manta a South American gateway for all of the Asia-Pacific, including Australia, for people and goods. That is going to energize tourism, business and trade with Singapore, China, Japan and others," said Zambrano.

The highways CRBC-CEIEC is building are set to benefit about 500,000 inhabitants along Ecuador's northern coast and mountain range who rely on trade in plants like palm, cacao and palmetto.

Teobaldo Arredondo, a local ranch owner who lives two hours away from the town of Quininde, described the Quininde-Las Golondrinas Highway as a "dream come true."

"In my view, China's support is something very positive," said Arredondo, 55.

There has been talk of building the highway for four decades since the 1970s, he said.

"Now we see that China's cooperation with the Ecuadorian government, as a result of the earthquake, has brought us this benefit with the construction of the first 36 km of roadway," said Arredondo.

Gustavo Yacelga, who is overseeing the project for the Ministry of Transport and Public Works, agreed China is playing a fundamental role in bringing about much needed development.

"This is an accomplished goal. People in this area feel they have realized their dream, which is the construction of a roadway that was relegated for many years," said Yacelga.

The project "helps regional and national progress as we are going to have easier, more economical and safer mobility," he said.